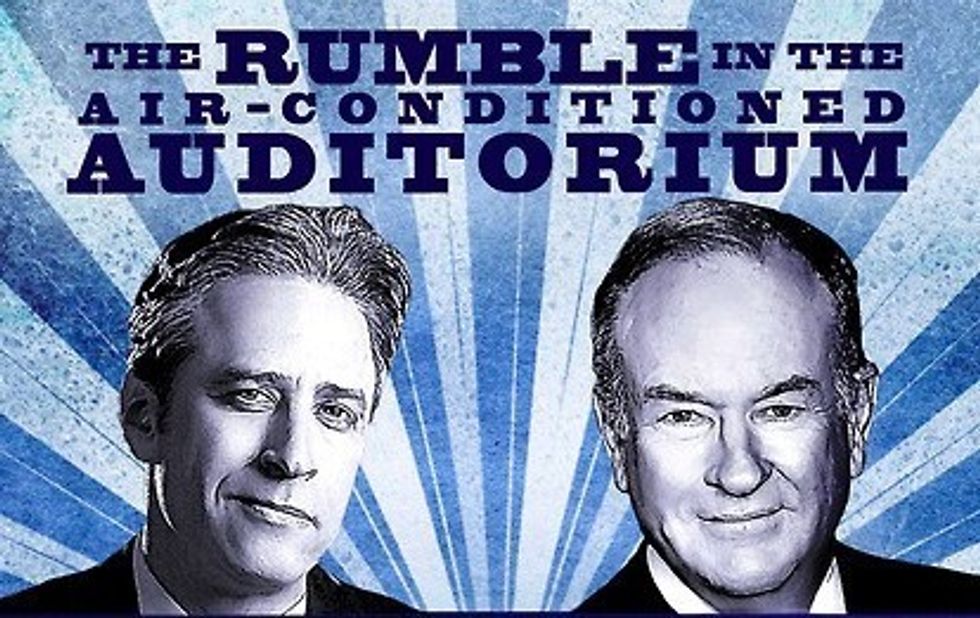 Here we are, in Wonkette's State of the Art LiveBlogoPlex, ready for an infotainment extravaganza that will test our technology, our speed-typing, and our bad habit of trying to sound like a Jon Stewart wannabe. We have our beer and our falafel, and we are ready to go. Joining us for the debate tonight is Kid Zoom, who will be looking over our shoulder and telling us we're using the computer all wrong.

Should you wish to access the online stream, it can be purchased here for $4.95, presumably even during the event; you're supposed to be able to stream/download the thing afterwards as well, too. Half of the profits will go to charities of the debaters' choice, if that assuages any qualms you might have about blowing five bucks on something involving Bill O'Reilly. Your Wonkette is all about assuaging qualms. Say that five times fast if you can.

8:00 OK, so they are starting! Already we are making stuff up, because watching on Kid Z's computer didn't work, so we have the debate streaming on the desktop and we are blogging on our own laptop. Here come the debatrices!

8:03 First question: Will people make their choice based on the economy? Bill: I don't care, here's my opening statement. He holds up a sign saying "Debt is Bad" -- Oh, but c'mon, John Maynard Keynes could kick your ass, Bill.

8:07 Ha-Ha, Bill sez the poster child for the "entitlement society is Sandra Fluke. Yep. Jon's opening statement: "My friend Mr. O'Reilly is full of shit." I want to get one of those elevator podiums Stewart has. Stewart now points out that most of our problems stem from the alternate reality created by the media talking machine, or "Bullshit Mountain."

8:11 Jon dubs Bill the "Mayor of Bullshit Mountain." We have arrived at Stewart's favorite talking point: the Hype Machine leads to outrageous hyperbole like the notion that our Nation is endangered by the Kenyan Usurper. O'Reilly returns by asking why NPR gets our money...and then equates progressive taxation with Maoism.

8:15 Stewart points out that we all have tax dollars going to things we don't like. O'Reilly continues to point out how much he thinks Bill Moyers is a waste of money.

8:20 Next question: What is to blame for our economic troubles? O'Reilly: Small business is afraid of the cost of Obamacare. He has pre-made cards for this stuff. The free market will eventually sort this all out, but it's Obama's fault that gas prices have gone up. Stewbeef replies: going from a surplus to a deficit in Bush's 8 years kind of had something to do with it. O'Reilly: Bush is gone, shut up!

8:22 Stewart: You want to talk entitlement? Bush ran 2 wars and a couple of tax cuts on credit... Bill-O jumps on Stewart's apparent confusion of the deficit and the debt...and I'm really enjoying this "1554" dark ale.

8:25 New question: Is the expansion of entitlements making us a different society? Stewart: Humans like free stuff. The real question is whether Obama has fundamentally changed the relationship between Americans and government, and no he han't. Now we get a brief discussion (maybe) of who's a taker and who's a maker?

8:28 Stewart: On Bullshit Mountain, "my needs" are just fair and decent. "Their needs" are entitlements. For example, Bill O'Reilly grew up in Levittown, which was financed by -- tadaa -- mortgage interest deductions and soldiers on the GI Bill.

8:38 Stewart thinks that encouraging democracy in the Middle East may result in elections for people we don't like much. O'Reilly thinks we need to yell a lot more at Iran, which is not twitchy enough yet. We also need to tongue-kiss Bibi Netanyahu.

8:42 Kid Zoom has brought his father a fresh beer. He's a good kid. Moderator is having about as much success in quieting these guys as Jim Lehrer did. Stewart seems to think that Obama should not be judged more harshly than other presidents for attacks on embassies, O'Reilly points out that they are no longer in office.

8:47 New question on media bias; we return to a favorite Stewart talking point: the real bias is for sensationalism, not liberalism, and FoxNews is an over-reaction to a perceived leftist bias. Fox is an autoimmune disease, "the Lupus of TV News."

8:48 Shout-out to Sara Benincasa, who we hope will throw some abuse our way

8:50 We will now talk about the Constitution. E Plebnista! Jon Stewart seems to believe in the old-fashioned notion of the social contract. That commie.

8:51 Bipartisan agreement on the awfulness of CNN

8:53 The War on Christmas starts early this year. The Jewish guy has a perspective on this, which Kid Zoom agrees with wholly: "Walk a mile in Hannukah shoes." Bill-O declares victory in the War on Christmas, and the ACLU is bad.

8:55 Why haven't we heard anything about immigration reform? It's all starting to blur into syllables, really. We should have eaten dinner before this thing. Oh! The military! If we're going to have a war, we should actually share the burden. Bill-O opposes the draft, because draftees are laaaaame. Both love The Troops.

9:00 Kid Zoom is ordering subs. What a fine child. And a question about switching from Electoral to popular voting. Stewart likes popular vote, O'Reilly likes the protection for small states' influence with the Electoral College. I want brown mustard on my sub.

9:05 Bill-O wants to be Supreme Ruler of the Civilized world, but with limits on voting for "more participatory democracy," what???

9:07 Healthcare changes? Who deserves care? Bill wants Insurance companies to have MORE power to make the system work more efficiently, with no gummint interference. Interstate competition will make health insurance as free as the credit card industry. Stewbeef wants single-payer, which has never worked anywhere on the planet, ever.

9:13 If we can make a military work, why would gummint healthcare necessarily be horrible? Somehow this makes O'Reilly think of Deepak Chopra.

9:15 Why vote for Obama? Stewart: It's a race between him and Mitt Romney. And the SUBS are here! Kid Zoom's favorite, BLT with Turkey.

9:16 Who is your political hero? Stewart: Robert Kennedy. O'Reilly: Abraham Lincoln (We'd have bet on Reagan!) Stewart: But could a Lincoln get elected in today's 24/7 media landscape?

9:20 What's the biggest problem in our political discourse? Stewart: We're having the wrong arguments. It's not freedom vs. socialism, it's that we can't compromise or admit how close we are. O'Reilly: the big problem is that being an "assassin" pays really well. He does not mention the name "Glenn Beck," but yeah.

9:25 The possibility of a serious discussion of Grover Norquist's tax pledge vanishes into the aether.

9:28 What do you appreciate about your worthy opponent? Stewart: Bill's smart and funny, and moves fairly fluidly for someone built like a Yeti. O'Reilly: I admire someone who's been in rehab 6 times. But Stewart visits the Troops.

9:30 What advice do you have for America's young people? Stewart: Don't try to smoke the seeds. Also, this may be the best time to be alive, and I trust this generation. Please don't think of me as a moocher when I collect my benefits. O'Reilly: Get offline, get outside, find what you're good at -- everyone's good at someone...er, something!

We agree, actually. If folks like Kid Zoom are going to eventually run things, we'll be just fine. Until the little bastards want the computer so they can play Fallout: New Vegas.