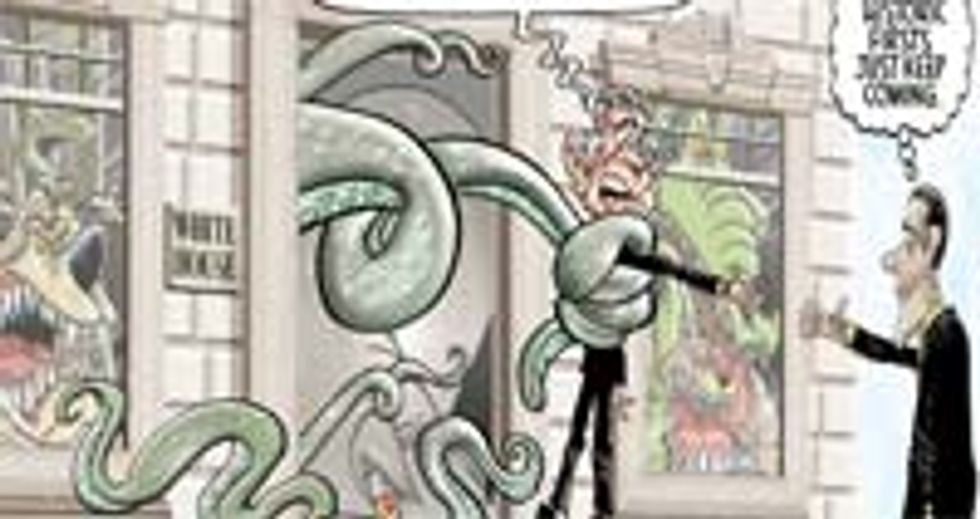 You know who we miss already, even though he's not technically "gone" yet? Our President, George W. Bush! He was fun to draw and always getting into hilarious scrapes -- like choking on a pretzel, remember that! And he liked to dance around for our amusement! With that kind of entertainment value, what's a war crime or two between friends? Join us for a nostalgia-laden trip through the final days.

Clicking on the cartoons makes them bigger! Do it! Clicky clicky!

So, imagine the following scenario: you're standing around idly, doing that thing you do, when suddenly one of your species is savagely and abruptly beheaded, by an axe. The headless corpse of this individual, who was probably one of your close friends, certainly someone you saw every day, lurches away from the executioner's block, limbs flailing wildly, stray nerve impulses causing the legs to pump in a ghastly simulacrum of life, as red arterial blood pumps spastically from the neck-stump. And as this terror-image stumbles by, you ... crack wise about the George W. Bush presidency. Can you get your head around such a disturbing sequence of events? Probably, if you've lived in America for the past eight years.

But what has Dubya been up to? Well, now that he's out of the spotlight, he can finally follow up on one of his less-noted campaign promises to a key constituency by holding a furry convention right in the White House! Whee, yiffpile in the Oval Office, everybody! Unfortunately, America's cosplayers have been disappointed by the President's endless temporizing -- oh, 2006 isn't a good year for DCFurCon to be here, we've got, uh, Trekkies booked in the Lincoln Bedroom, yeah, that's it -- and are feeling pretty used, so only three of them showed up. And not the sexy ones, as you can see here.

Still, this administration hasn't lost its sense of humor! Just last week, for instance, Dick Cheney played one of his hilarious practical jokes: he rousted Bush in the middle of the night, forced him out to the White House lawn at gunpoint, and then made him dig his own grave, while his Secret Service detail laughed and laughed. Eventually, they let the President in on the joke, after Cheney had shot him in the face once or twice, and he thought it was pretty funny too! Oh, the japes those fellows will get into.

And that's one bit of continuity that will persist into the new Obama Administration, because the president-elect is a jokester as well! For instance, when Obama came to visit Bush for their first post-election meeting, he arrived a little bit early, then tried to run Bush over with his car. Fun! Bush had a god laugh about it, too, six to eight weeks later, when his shattered legs had healed.

Unfortunately, the historical presidential meet-and-greet didn't go exactly as planned. Obama wasn't able to actually go inside the executive mansion, because the whole building was still lousy with terrifying demon-beasts with clammy tentacles and razor-sharp teeth, ready to feast on first the flesh and then the souls of whatever unwitting human victim makes the mistake of stumbling into their lair. We like to call these hell-demons "the Bush Cabinet!" Ha ha, get it? Because they're so awful! They stand in marked contrast to the future Obama cabinet, which will be composed entirely of Clinton retreads and best depicted as a nest of angry, mangy rats.

Then, after Obama left, Bush and Cheney burned down the White House, for the insurance money.