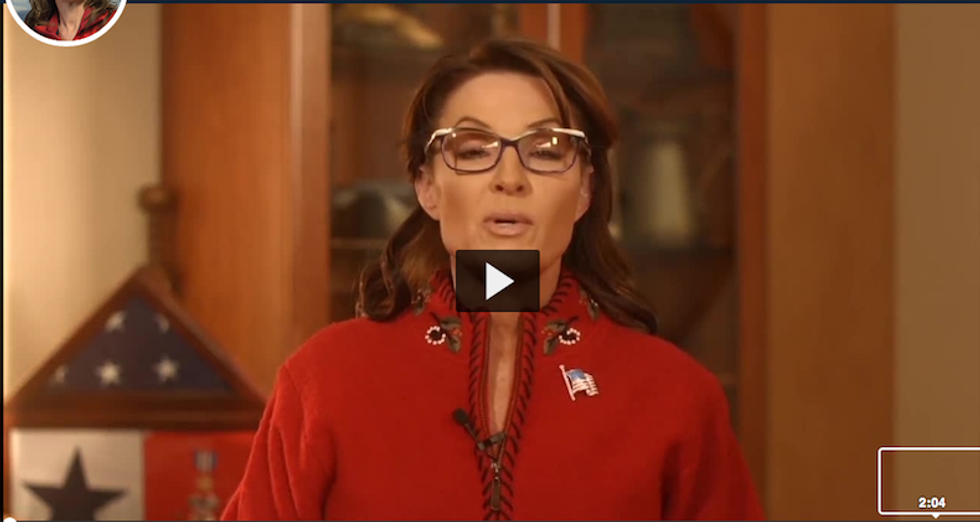 This is the screengrab posted by the Sarah Palin Channel for her video about the fall of Yemen's capital. We are not making this up, and for once, we are not portraying Palin in a light less flattering than the one she has cast upon herself.

Hope you've eaten your leafy greens, Wonketeers, because this week's Sarah Palin Channel is pure red meat. Let's begin with the Grifter Queen being both snitty and wrong about foreign policy, because that's always fun, right? Here's a taste:

In 2009, President Obama inherited a war on terror where Middle East terrorists were in retreat, with al Qaeda in Iraq a broken force at the time. But now, terrorists control more territory than they ever have, and you don't hear a lot of this truth being spoken in the press, you didn't hear it at all in the State of the Union?

A reasonable observer might question whether the Syrian Civil War has had anything to do with the fate of al Qaeda in Iraq, seeing as how elements of al Qaeda in Iraq are now big parts of ISIS or ISIL or whatever you want to call it.  A reasonable observer also might type "State of the Union 2015 transcript" into Google, or just go read the full speech at the White House's website and see exactly what Obama actually does say about the Middle East and the continued bombing thereof.

Anyway, that's Palin talkin' about countries she can see from her house, which is always fun. Tell us about your favorite part in the comments, which we do not allow.

Our favorite post this week is called "Banning the Bible," because obviously. In this video, Governor Quitterface tells the story of Loyal Grandstaff, the protagonist in a poorly written morality play a real 12-year-old boy who came to national attention when his local Fox affiliate published his claims about evil, gubmint-run schools confiscating his Bible.

Unfortunately, young Loyal's story didn't stand up to scrutiny — even The Blaze has an article about it, but we are not going to link to Glenn Beck's Alternate Prom For Spittle-flecked Neckbeards, because FOH — and this video is yet another pitch for Palin's stupid Christmas book. Once again, she speaks to the AOL-email-address crowd in the clear, lucid oratory that made her so famous in Iowa last month.

We can keep striving for, um, that understanding of what the Constitution means, and remember that freedom that was embraced, and enjoyed, respected in our schools, and um, it, helping us, helping kids, helping the school and the community, it didn't hurt anybody, we can get back to that if we just stand up, stiffen our spine, and say 'No more of that erosion of our constitutional rights, this is America.'

God, the book, always with the book. So many of the Sarah Palin Channel's videos promote her goddamn book. It is February! How many copies of the book did she order? How big is her overhang here? (Grow up, you guys.) How pissed is Todd that boxes upon boxes of unsold books are sittin' in the garage, takin' up space that could be occupied by a vintage diesel-powered dog sled?

At this point in the grift, Yr Wonket is developing a grudging respect for Palin's steadfast refusal to try more than one take and to work without a director. If this were Lil' B and not Sarah Palin, someone would praise her as an auteur, and then we'd all roll our eyes at that someone and wonder who invited him (it's always a him).

Much as we respect the artistry of Palin's grift, though, we respect its bald-facedness even more. Here's Palin coming right out and explaining that even if Loyal's story had held up — even if a taxpayer-funded atheism indoctrination-bot had taken away the precious Word of the Lord with the sole intent of repressing the young lad — even if that had happened, the school's principal sided with the boy from the start.

In dozens of legal cases, courts all the way up to the Supreme Court have blah blah blah

So even if young Loyal's story holds water (and its socks are wet, so take from that what you will), it still involves a swift and immediate remediation from the school's principal. Therefore, INPEECH, we guess? We don't even know any more, oh wait, we're just supposed to buy her book, it's always about buying her dumb, stupid book.