The Sarah Palin Fartknocker Report: Sarah's Having A Cyber Monday Sale For All Her Crap 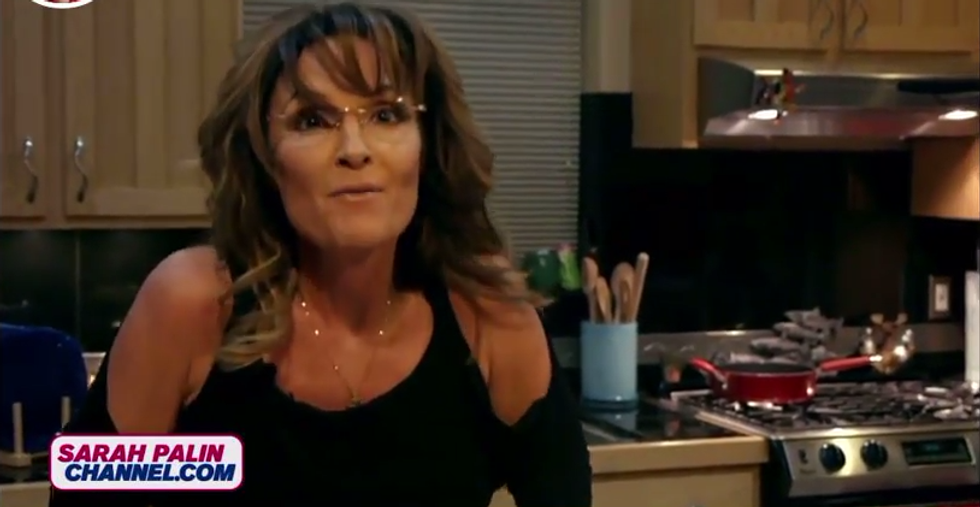 It's Cyber Monday, YOU GUYS, and the Sarah Palin Channel is bringin' you more hot online deals than you can shake a snow machine at! You guys all know Cyber Monday, right? It's the day when all us lazy millennial types stop sexting for two goddamn seconds and buy all of our Christmas presents online, rather than trample one another at Wal-Mart like George Washington did.

Governor Quitterface is in on the Cyber Monday action ahead of schedule. If you go to the Sarah Palin Channel right now (no link, because seriously?) you may find this message, teasing a personalized "mystery price" for new subscribers.

We already have a subscription (thanks, Fartknocker, remind us to murder you when we meet in person) so we did not click through to find out how much money we could save, but spoiler alert, it is zero dollars.

This week, Palin posted a video where she spends, like, six whole minutes talking about what the midterms mean, but that's pretty boring, right? Instead, let's watch her in the kitchen as she prepares for Thanksgiving. She even posted recipes! Which we are going to, um, reappropriate below, FAIR USE, NEWS AND COMMENTARY!

But first, a disclaimer: Palin wears a sweater with cut-out shoulders in this week's video.

Yr Wonket understands the double standard applied to women politicians as regards their sartorial choices, so we will not snark about the cut-out shoulders on Palin's sweater.

Ha, psych, we are totally going to snark about the cut-out shoulders on Palin's sweater. Join us in the comments, if such a thing were allowed!

-Tough times when a former VP candidate can't even afford to buy sleeves.

-Does "sun's out, guns out" apply to Arctic winters?

Snark aside, Sarah Palin is a 50-year-old grandmother, and she probably has better muscle tone than Yr Wonket. We mock because tearing others down helps build us up.

We also mock because Palin's gustatory goal is to make homemade cinnamon rolls that taste just like the stuff you eat at the airport, about 20 minutes before you get the squirts.

My goal is to make my cinnamon rolls someday taste just like Cinnabon's. I go online and I find that recipe and I try to copy it, never quite works, but I'm gettin' closer.

Part of the secret to Cinnabons, though, is, oh my goodness, the caramelized nuts that they have on top. I'm gonna use pecans that are so good. You caramelize 'em so simply, I don't know why we don't always do this.

She's wrong about the Cinnabons, but right about everything else. Caramelized pecans are delicious, and they should be on everything. For the first time in the history of the Sarah Palin Fartknocker Report, we find ourselves agreeing wholeheartedly with Governor Quitterface.  And thus we learned that the holidays don't have to involve arguments about politics.

Oh, and what kind of a recipe hub mommyblog would we be if we didn't bring you Sarah Palin's apple pie recipe, which was originally published in one of Palin's books and then repurposed for her online TV thingy. We submit this as further evidence that her grifting grows more efficient by the day.

In this recipe, my mother-in-law, Faye Irene Palin (affectionately called FIP by family), uses fresh, wild, handpicked Alaskan blueberries. FIP bakes this perfect pie for holidays every autumn at her rustic Crosswinds Lake cabin, but notes, "I just have to get to the blueberries before the bears do!"

Enjoy this pie with the flakiest, most delicious crust (there are two different variations below), from a lifelong classy Alaskan woman!

Note in the recipe below the crust ingredients have been doubled from FIP's original version, so expect some leftover dough. Faye must be able to roll the dough out so delicately and thinly that she needs half the amount I do to cover the entire pie crust. Not me. I'm too clumsy and need more dough to patch the holes. I have to double the recipe just to fit my one pie. What to do with the leftover dough? We use it for what we call "kids' crust." We drizzle melted butter on it and sprinkle on some cinnamon and sugar before baking it in a small pie tin for the kids to enjoy.

2 cups plus 4 tablespoons flour (Measure by the dip-level method. Level off the measuring cup with a straight-edged tool, such as the back of a table knife)

Preheat oven to 425 degrees F. In a large bowl, mix the flour and salt. Add the oil and mix with a fork until it starts to look like meal. Sprinkle the flour mixture with water and continue to mix with a fork. Gather the dough together and press into a ball. Roll the crust between two long strips of waxed paper. Place the dough, paper-side-up, in pie pan. Peel off the wax paper. Fill with the blueberry filling (below) and finish the pie crust edges. Bake for 35 to 45 minutes, or until pie crust is brown.

1. Preheat oven to 425 degrees F. In a large bowl, mix the flour and salt. Add the oil and mix with fork until it starts to look like meal. Sprinkle the flour mixture with water and continue to mix with a fork. Gather the dough together and press into a ball. Divide the flour almost in half. Use the larger half for the pie's bottom. Roll the bottom portion of the dough between two long strips of waxed paper. Place the dough, paper-side-up, in pie pan. Peel off the wax paper. Fill with the blueberry filling (below) and trim the edges. Roll the top portion of the dough on waxed paper. Cut slips in the middle. Place the dough over the filling. Trim the dough 1/2 inch beyond rim, fold under, seal and flute.

2. I find that by always being exact in my measurements, the consistency in the crust is good. When you roll the dough out between the wax paper sheets, you can roll the crust very thin. You just have to be patient when you peel back the wax paper when you put the crust on the pie.

1. Wash and drain the berries. Pick them over and remove any stems and hulls. Use the smaller or larger amount of sugar according to your taste and the sweetness of the blueberries.

2. Mix the sugar, flour, and cinnamon. Fold in the berries. Pour the berry mixture into a pastry-lined pie pan. Dot with butter. (I do this with every fruit pie -no matter what kind- apple, rhubarb, cherry, strawberry). Cover with the top crust if using. Seal and flute. Bake for 35 to 45 minutes or until crust is brown and juice begins to bubble through slits in crust.