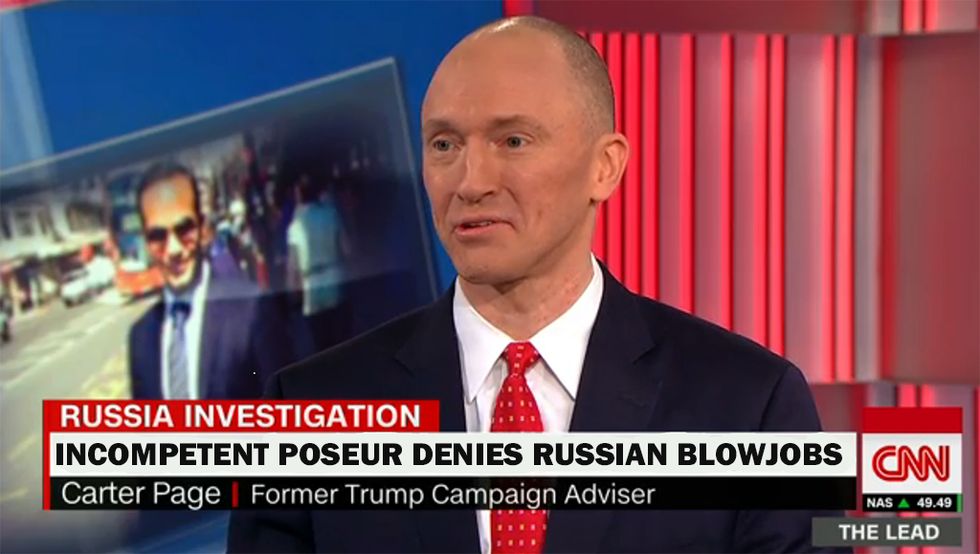 Okay, Wonketariat, rise and shine, and don't forget your booties 'cause it's COOOOOLD out there today! Here's some of the things we may be talking about, but first, CROWNED LEMUR BABIES! Trump is expected to approve the release of THE MEMO, then bounce the decision back to Devin Nunes and the House Intel Committee so Republicans can continue dragging their collective asses all over the carpet.

Deep within the halls of Trump's White House people are worried that Devin Nunes's Russian tragicomedy will flop now that the audience is losing interest.

The story behind THE MEMO is a winding ass-backwards road that leads to THE DOSSIER, and it all starts at Devin Nunes and his staff.

This morning Trump tweeted a thing about how the FBI isn't totally corrupt, it's just the leftist boy scouts at the top, or whatever.

DJTJ took to Twitter yesterday afternoon to potentially implicate himself in an obstruction of justice charge by blithering about how Andrew McCabe was "You're Fired" over THE MEMO.

Three lawyers for Paul Manafort's partner in Not American crime, Rick Gates, "You're Fired" themselves, suggesting that Gates is rolling over on Donald Trump and begging for clemency to Robert Mueller.

Trump talks to Sean Hannity late into the night, gossiping about Her Emails and other tinfoil hat conspiracies, with some White House officials joking that Hannity is "senior counselor to the president."

Dame Peggington is still awash in the afterglow of Trump's Reaganesque SOTU, even if the sullen "Draculaic" Democrats sat slumped in the shadows, running only on the commie fuel of the poors, hoping that Robert Mueller's "Ahabs" will catch their fat, white whale. [Archive]

The Mooch is talking again in a desperate attempt to repair his reputation, and this interview is everything you'd expect, including "Berserkazoid Craziness," and "Fucking Sith Lords."

Mike Pence LOVES the Jews because they're pawns who will help him kick start the apocalypse and reawaken Cthulhu-Christ.

Sorry, servers, the Labor Department killed the study that showed letting restaurants pool tips was gonna pick your pocket! What you don't know can't hurt you.

Mike Pompeo is pissed off that anyone would think he was doing dirty deeds last week when he met with three Russian spy chiefs in DC.

As Republicans gather in the woods to kvetch, plot and scheme this weekend, Donald Trump reminded them that he's "tremendous," Nancy Pelosi is a bitch, and that Orrin Hatch once said his is the only presidential dick he'd ever suck.

Even though some of them are trying to jump off the Trump Train, most Republicans love Donald Trump as much, or more, than St. Ronnie Reagan. He is, after all, making (some of) them shitloads of money.

Mittens is getting ready to announce his Senate run now that he's gained the support of his family and a shitload of donors.

The State Department's top career diplomat is retiring, and now the DEEP STATE is freaking out over what will happen in all the shithole countries now that even MORE State Department leadership is running from Foggy Bottom.

Those damn, dirty Democrats LIED when they said they spent $1 million to defeat the Bible thumping racist and ALLEGED pedophile Roy Moore; most of that money was raised directly via micro donations for Sen. Doug Jones. IMPEACH!

The price of avocado toast is about to skyrocket (again) as California farmers struggle to harvest crops due to the deportation of migrant workers. No joke, farmers are even offering salaries, PTO, and 401(k) plans in an attempt to attract people to do dirty jobs.

An anti-gun taskforce in Baltimore is accused of running a complicated hustle that involved shaking down street level dealers, planting fake guns, stealing drugs and cash, stalking, and robbery while charging the city for hundreds of thousands of hours in overtime. Charm City cops, just doing what they do best.

Former sheriff and racist fellon Joe Arpaio is denying that he's an anti-semite after he gave his FIFTH INTERVIEW to a Jew hatin' rag in four years. A spokesman said Arpaio "doesn’t do background checks."

Bad hombres in Not America are using Bitcoin to skirt sanctions now that they've found how easy it is to make, use or steal stuff using magic Internet funny money.

Facebook just filed a patent for a system that could guess how poor you are based on all the crap you willingly tell Mark Zuckerberg.