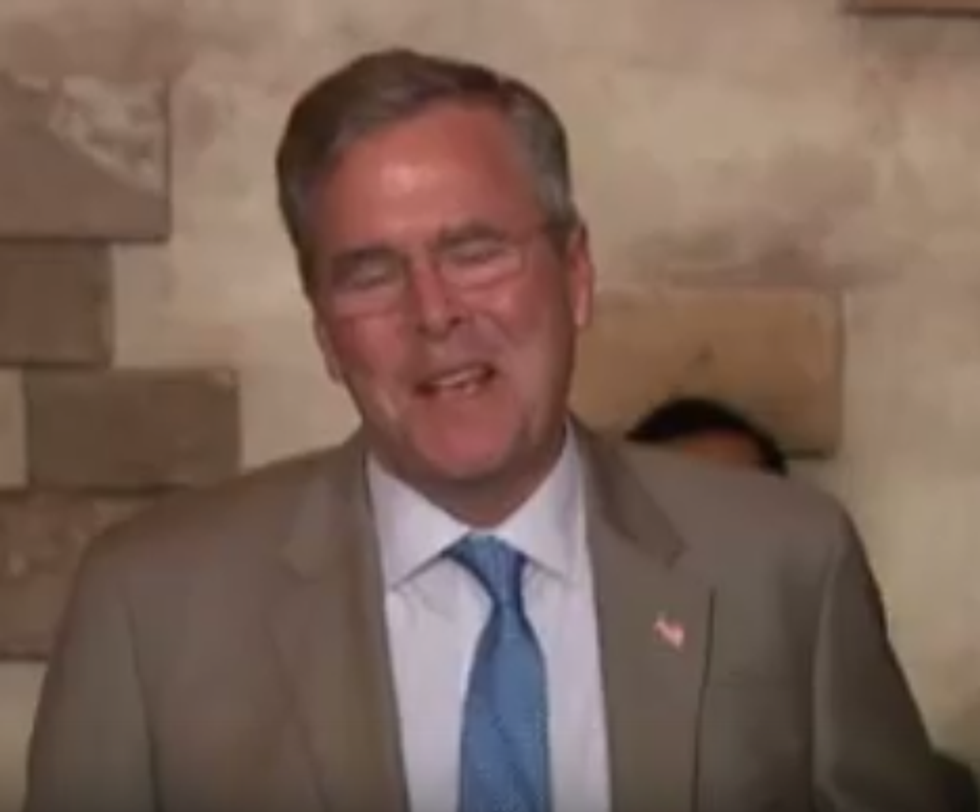 Oh, that Jeb Bush! He is literally THE WORST at running for president of America. It's like his entire life, he's been living in the shadow of his dad and his brother, and he's just really tired of how every single time he walks in the front door of the Kennebunkport manse, his mother Barbara drops her polite demeanor, stands up on the dining room table and starts flapping her arms yelling "LOSER! LOSER! SHOULDA BEEN AN ABORTION!" And Jeb's all like "NOT AGAIN MOM!" but she can't hear him because she's cracked herself up so hard she's looking for an inhaler.

Let's look back at all the times Jeb pooped the bed and shamed his mother this week:

Oh yeah, Donald Trump? Look who Jeb's got! Eric Cantor, that former Congress-guy who spent his years of "service" nipping at John Boehner's testicles and scheming to take his job, and just ALMOST MADE IT, but then he got primaried by A Idiot named Dave Brat, and subsequently lost to A Idiot named Dave Brat. But whatever, JEB GOT THE ENDORSEMENT:

This seems to be a good time to float a little theory we're mulling over, namely that whatever reason Trump is in the race, it isn't because he wants to be president, but possibly it's because he HATES the Bush family with a fiery passion. Trump trolls everyone, but he reserves his most special ire for Jeb, and it is hilarious.

And poor Jeb can't keep up. Oh, he's TRIED to hit back at Trump this week. It's just another on the long list of Things Jeb Not More Better At. He tried to say, "Please, sir, I mean Mister Trump, but maybe your idea of building a fence along the border won't work, NO OFFENSE INTENDED PLEASE!" And Trump was like "SHUT UP AGAIN, LOSER!"

What's so great is that Trump DID call it a YOOOOGE FENCE originally, but little things like "facts" aren't going to get in the way of Trump winning this round against Jeb, like he wins all the rounds against Jeb.

The Jeb camp is also trying to do zingers to Trump about this interview where Trump said he has a sister who would a great Supreme Court justice. To Trump's credit, he said at the time that "we'd have to rule that out," due to how she is his sister, and nepotism or whatever. But Jeb, who has never NO NOT EVER benefited from family connections, had his campaign tweet stuff about how Trump was endorsing his sister for SCOTUS, and how Trump's sister eats partial-birth abortions for brunch, and you know what? It doesn't matter, because Jeb will lose this argument.

No, I meant to say Asians were gross anchor babies, not Mexicans!

Jeb doesn't know what he's supposed to call the brown babies, and the media won't help him, so he just keeps saying "anchor babies" a lot, but no wait, not the Mexican babies, his WIFE is Mexican, that's not what he meant! He was just talking about Asians like Margaret Cho or something, or maybe Connie Chung, OH FUCK! And now the sheets have to be replaced, again, due to Jeb shit the bed, again.

Not cancer research, screening or prevention, not sex education, not contraception, not STD testing, nope, none of that affects ladies in the slightest. (In addition to, yes, abortions, which are, yes, health care.) Kaili already lady-splained why Jeb is a big fat oily sack of dumb on this subject, just go read her thing.

Jeb will do more gooder job at hurricanes than his brother, wait is that 'Heckuva Job, Brownie' in Jeb's campaign ad?

He's trying SO HARD to show how, as governor of Florida, he was ready for Hurricanes Charley, Francis, Ivan and Jeanne. He was ON IT, unlike another person who is his brother. And hey, maybe those WERE handled better, but oh wait, who's this in the new Jeb Bush "Goodest At Hurricanes" ad?

Yes siree, that's idiot boy "Heckuva Job, Brownie" himself, Michael Brown, the one who so royally shat all over the federal government's response to Hurricane Katrina, under the presidency of George W. Bush.

Jeb has a gay friend no he doesn't

Jeb Bush has a gay friend who is also some kind of Spanish, named Xavier Cortada. They probably met because they're both Hispanic voters. Anyway, Jeb wrote about Cortada in his new book, like they were best pals, Jeb and "Xav," as he probably calls him in his mind, but Cortada needs America to know that they're not friends in THAT way, by which he means the "I'd vote for him" way:

“I like him, I respect him, but I disagree with him. I don’t wish to see him at 1600 Pennsylvania Ave.,” Cortada told the Daily News.

In the memoir, Bush introduces the Miami artist as a gay friend. Cortada qualified the characterization.

“I do consider Jeb Bush a friend in that way. In the way you’d be a friend to a politician,” Cortada said. “It’s a different kind of friendship.”

Mommy, can I count on your vote in November?

Hahahaha, maybe not. Because remember how Donald Trump released an ad this week, which was little more than a Your Mom joke, aimed at Jeb? It featured Barbara, acting nice and polite, talking about how there have simply been enough Bushes as presidents (subtext: and there are NO MORE GOOD ONES!), therefore there's no reason for Jeb to be out there embarrassing himself like this. To end our roundup, let's watch it all again, together, and laugh about how Jeb Bush is a suckity suckster who sucks so bad that his own mother probably just ordered a Hillary sticker for her horse-drawn carriage, because you know, girl stuff.

Y'all, this was just ONE WEEK of Jeb attempting to run for president, in August, when everything is stupid and unserious. How much worse can it get? Only Jeb knows.