The Seven Words You Can't Say At The CDC 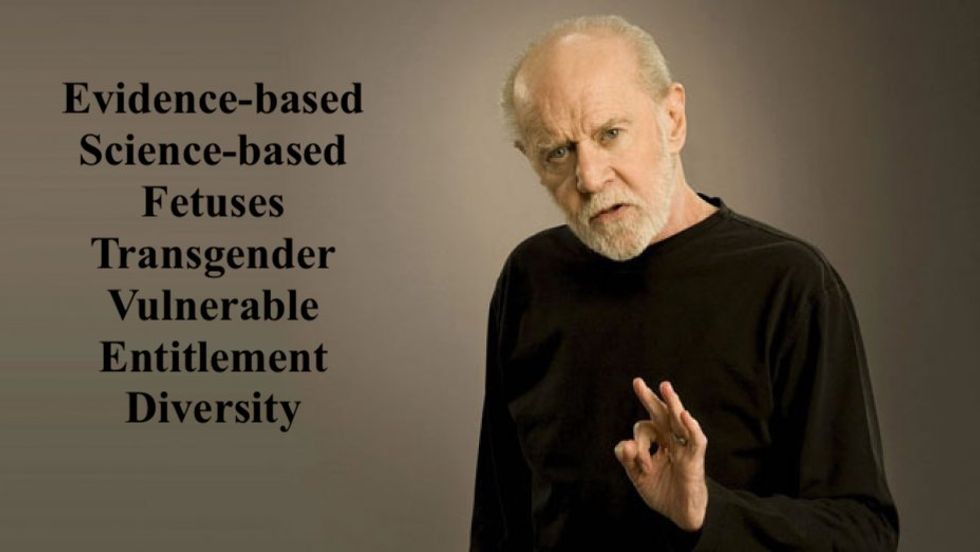 On Friday night, the Washington Post reported that the Trump administration had banned the Centers for Disease Control from using certain words in any official documents being prepared for next year's budget.

The seven no-no words are:

Yes! The nation's top health agency can't talk about any of these things, because doing so would hurt the delicate feelings of the Trump Administration and the evangelical weirdos they represent. Science and evidence? SO MEAN! If we have to hear about things being valid because they are science-based or evidence-based, well then that just validates all the unfair stuff science says about the earth not being 6,000 years old or evolution happening or climate change existing. And how is that fair?

In some cases, they were given new terminology to replace the words with. For instance, instead of "science-based" they can now say "CDC bases its recommendations on science in consideration with community standards and wishes." Which I guess now means you can "wish" science away if it so moves you.

Probably they will be allowed to replace fetus with "definitely fully developed human person living inside a womb for some reason" or something.

The two that strike me as the most comical, frankly, are "vulnerable" and "diversity" -- largely because it's like they think those words are never used for reasons other than "poor people" and "black people" and are thus terrified of them.

Banning the CDC from using these words in these documents will hinder some of the work they do, or at least their ability to explain to the budget office what that work is:

At the CDC, several offices have responsibility for work that uses some of these words. The National Center for HIV/AIDS, Viral Hepatitis, STD, and TB Prevention is working on ways to prevent HIV among transgender people and reduce health disparities. The CDC’s work on birth defects caused by the Zika virus includes research on the developing fetus.

It may seem counterintuitive, given how much they are supposed to love fetuses and all, but many conservatives bristle at the thought of research dedicated to actual fetal health and birth defects. Anti-choice sites have even started pushing the theory that Zika does not even cause microcephaly or other birth defects. Why? Because they don't want women to have abortions.

Now, you may be thinking -- I bet all those Trumpists who love free speech are absolutely furious about this. You would be wrong! I checked out The Donald, I scoured my secret Twitter list of alt-right douchebags, and there was not a peep about this. Mostly because their interpretation of "free speech" is very different from everyone else's. And when they say "facts not FEELINGS" they mean that facts they made up themselves override actual proven facts.

In fact, although this seems as if it's only a gift to the evangelical community, it's also a bit of a gift to the rest of Trump's voter base as well. I'd wager that this move, once it is talked about by the alt-right crowd, will be cheered as a victory simply because it "pisses off the LIBS."