The Snake Oil Bulletin: Teen Charlatan Just As Bad As The Grown-Up Kind 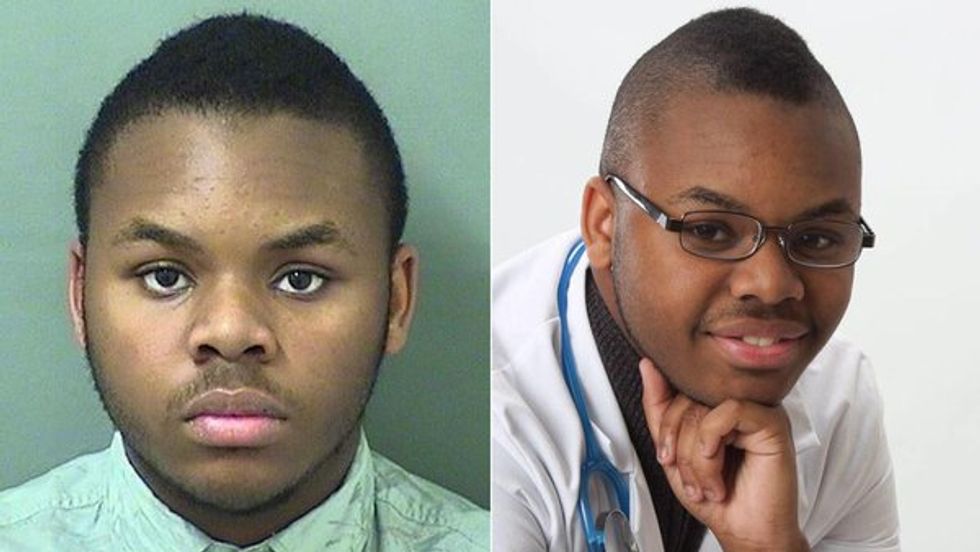 Welcome, friends! It's time once more for your weekly round-up of flim-flammery and balderdash, the Snake Oil Bulletin! This week we're making a return to the world of medicine, a field with which your Dr. la Volpe, DDS, PhD, TMI, WtF, RMCP, is quite familiar. We've found two choice tales of medical malpractice, malfeasance, and malcontent to satisfy your woo-woo cravings. Our first story on the agenda involves that charming young gentleman above. Cute lil bugger, isn't he? What kind of mischief could an apple-cheeked young cherub like that create? Let's take a look, shall we?

Kid Charlatan Poses As Naturopathic Doctor, No One Notices Difference

Much of the internet exploded for a brief five minutes last week at the news of 18-year-old Malachi Love-Robinson being arrested for impersonating a doctor.

Last year, the then 17-year-old Malachi was caught donning a lab coat and wandering the halls of St. Mary's Medical Center in West Palm Beach, FL, posing as a doctor and looking in on patients' medical exams (the fact that he was caught trying to sit in on an OB/GYN exam should make your skin crawl). For reasons that still baffle us, the hospital and police decided not to charge the teen with a crime despite the potential HIPAA hurricane the teen could have caused. His mom said he had an illness of some kind and was off his meds.

Apparently Malachi learned his lesson, because this time around he decided that if he was going to pose as a doctor, it'd be much easier to pose as a fake doctor than a real MD kind. How did he do it? Simple! Malachi scraped the hospital logo off his lab coat, and tacked the title "doctor of naturopathic medicine" to his name. Using this one weird trick to apparently fool everyone, Malachi opened TWO (2) different clinics, employed staff, and even saw patients regularly before an undercover officer finally slapped him in handcuffs for being an unlicensed quack.

Malachi carried on his first charade posing as an OB/GYN for a month before being caught. Malachi successfully posed as a naturopath for almost a year before anyone caught him. The boy opened a clinic in October before being shut down, but opened a second clinic not long after, building himself a website, and somehow keeping staff on payroll up until late February of 2016. Let's take a gander at the still extant website for Malachi's second practice: The New Birth New Life Medical Center & Urgent Care, LLC.

Where to begin? First of all, that name is a bigger mouthful than Milton Berle. Second, spelling errors on the front page are never a good sign, but when your own naturopath doesn't know the difference between "there" and "their," you should run. The About Us page is populated by a cadre of grinning stock model ghouls. Malachi claims to be certified by the American Association of Drugless Practitioners (a fake accreditation diploma mill) and the American Alternative Medical Association (a "distrustful" and "questionable organization" according to Dr. Stephen Barrett of Quack Watch). The Services page is blank (shocker), with the only text being "Type your paragraph here."

Then we get to the Staff page. Hoo golly, mister, that's a fresh load of bullshit. The first thing we can determine is that the entire staff must have gotten the "senior picture" discount over at the Sears photo studio. "Dr." Malachi doesn't even pretend to have an MD, instead claiming a PhD. Even if it were true he wouldn't be legally allowed to practice medicine. If you're going to lie, kid, at least do it well. He also claims to hold an "HHP-C" and an "AMP-C," which are not real. They are made up letter garbage. Then there come his qualifications. We hope you have your vinaigrette on hand, because it's time to feast on some delicious word salad:

Dr. Malachi A. Love-Robinson is a a well rounded professional that treats, and cares for patients, using a system of practice that bases treatment of physiological functions and abnormal conditions on natural laws governing the human body. Dr Love-Robinson utilizes physiological, psychological, and mechanical methods, such as air, water, light, heat, earth, phototherapy, food and herb therapy, psychotherapy, electrotherapy, physiotherapy, mechanotherapy, naturopathic corrections and manipulation, and natural methods or modalities, together with natural medicines, natural processed foods, and herbs and nature’s remedies.

What did we just read? Was that a doctor's qualifications or a list of minors you can pursue for your alchemy degree?

Malachi's staff is even fishier. His operations director, Michelle L. Newsome, doesn't list any business or marketing experience, but rather touts her family as credentials. The center's program director, "Dr." Sandra J. White, isn't even a doctor. The bottom of her bio admits she only holds an honorary doctorate in divinity which she apparently received for teaching enough Sunday school classes.

Incidentally, "Dr." Love-Robinson has a storied history with ministry too:

On a website offering free ordained ministry certificates, Love-Robinson is listed as a reverend who specializes in "philosophical theology, religious epistemology and Christian apologetics." His biography states he is working on a doctoral thesis and lists him as a naturopathic physician.

As of today, Malachi is being charged with practicing medicine without a license, and is accused of cheating an 86-year-old woman out of over $6,000, through $3,500 in fraudulent medical bills for "vitamins" that didn't work, and then by literally stealing the woman's checkbook and writing himself three checks for $2,794 after she had to be rushed to the hospital.

In the end, the fact that few people questioned Malachi's credentials, and that no one actually made an attempt to arrest him until February, is indicative of the absolute quackery of the alternative medicine world. The fact that someone with no qualifications, education, or even pubic hair could convincingly pose as a "naturopathic doctor" while touting obviously made-up treatments and using his practice as an excuse to feel up an undercover female officer says volumes about the permissiveness still granted the quack medicine world.

[contextly_sidebar id="QsOeXvJVLY3rZuZNALPqlLDigwsa6hFs"]Remember that wingnut dick blister who believed that soy turns kids gay? We found him the perfect love match. The mayor of the Indonesian city of Tangerang is claiming that a diet of ramen noodles will most definitely turn a child into a great big homo. Oh honey, no. Everyone knows the gay-turning foods are sausages for men and tacos for women. Feeding a child ramen will just turn them into a writer.

The mayor made the comments at a pregnancy seminar, a topic on which mayors are apparently qualified to speak? In our experience elected officials are great at the baby-making aspect of pregnancy but not so much the baby-raising part.

[contextly_sidebar id="wtVlaDxp9QPm5rB5ZRfe54DuLywWImGu"]Yr Wonkette gave Mayor Arief Wismansyah a brief mention in our roundup of crazy gay panic in Indonesia, but his explanation of proper nutrition for babbies deserves a closer look:

"To create Indonesian children that are healthy, smart, and competitive, the most important thing is, from the beginning, to provide them adequate nutrition, especially breastfeeding," Arief said as quoted by [Indonesian website] Okezone.

Most scientists would strongly agree with the crucial importance of early childhood nutrition, but we’re pretty sure there isn’t a single credible scientist who would agree with what Mayor Arief went on to say. According to him, nowadays parents are so busy that they often only feed their children formula and instant foods, which can have a permanent negative effect on their child’s development.

“So, it’s no wonder that recently there are more LGBT,” he concluded.

Incidentally, the source for this story, Coconuts Jakarta, may be our new favorite source for LGBT news from Southeast Asia (oh come on, like you have a different favorite source?). Take a gander at their response to the rest of the mayor's speech:

Now to be fair, Arief also said at the seminar that regional leaders such as himself should not discriminate against any of their citizens, even if they are deviant members of the LGBT community.

Which is a nice thing to say. Because it would be really unfair to discriminate against somebody just because their lazy parents turned them gay by feeding them formula and instant noodles as a child.

Oh ho ho, Coconuts Jakarta. Listen to you laying on that sass. Would we be remiss in speculating that your writers ate more than their fair share of instant noodles as a child?

As we noted earlier, it's been a bad week for Indonesian officials saying the dumb. Indonesian Minister of Defense Ryamizard Ryacudu referred to gay people as a threat worse than nuclear war, since they're "proxies" of some unnamed foreign enemy (Big Gayistan?):

‘It’s dangerous as we can’t see who our foes are, but out of the blue everyone is brainwashed – now the community is demanding more freedom, it really is a threat,’ Ryacudu reportedly said in the Ministry of Defence today (23 February).

‘In a proxy war, another state might have occupied the minds of the nation without realizing it.

‘In a nuclear war, if a bomb is dropped over Jakarta, Semarang will not be affected -- but in a proxy war, everything we know could disappear in an instant.’

A proxy war, he added, didn’t need military forces to undermine the country, as its effectiveness and danger came from being based on an ideology.

‘This sort of brainwashing is dangerous, as it skews the mindset of our nation away from our base ideology,’ Ryacudu said.

Oh honey, relax. Your ideology is base enough already. The only bomb any gays are dropping is that big high heel we drop on New Year's. People adopting a new way of thinking is not brainwashing -- it might just be that you're being left behind, and that terrifies you. Here, Minister, have some ramen noodles.