The Snake Oil Bulletin: Why Did Jesus Send Us To Collections, Mommy? 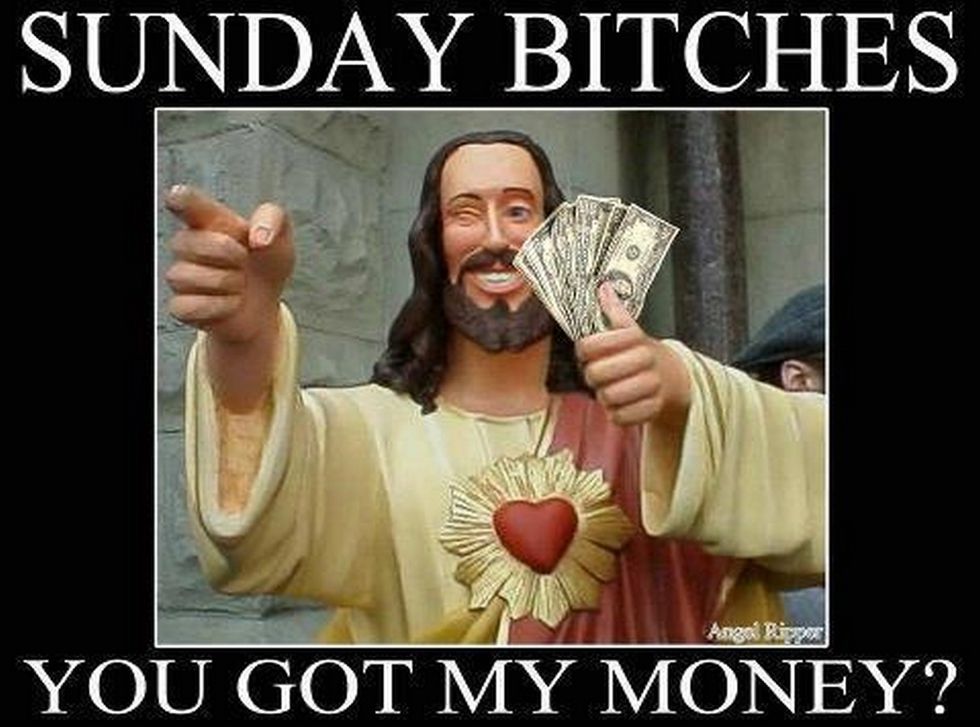 Welcome back, sinners. It's time once again for the Snake Oil Bulletin! We would like to take this time to remind our readers that unless you've paid your monthly $7.99 readers' fee, in addition to keeping up on your annual $150 membership fee to our 2 Smart 4 Scammers Club, and thrown in a couple extra bucks towards Donna Rose's college fund while you're at it, you are forbidden to read this week's edition of the Snake Oil Bulletin. We tried to erect a paywall like some sort of real newspaper, but we can't afford to build that paywall unless you pay us the money to keep you away from our content!

What we're trying to say, dear reader, is that Yr Wonkette has decided to re-register itself as a church, because if these next few stories are any indication, running a tax-free collection agency / extortion racket sounds like a pretty sweet deal. [Editor's Note: Your Fare La Volpe is DOING A KIDDING, we are not becoming a church or a scamster, but you can still click those links and help us out with a few bucks, why dontcha, dontcha know?]

A 92-year-old invalid was expelled from her local church because she wasn't able to pay her collection fee. Excuse me, I seem to have misspoken. She couldn't pay her "tithe." The Pastor apologizes for this egregious error in miscommunication.

Josephine King has been a member of the First African Baptist Church in small town Bainbridge, Georgia, for over 50 years. Over the past few months, however, she has been bedridden and in the care of her family -- which is not an unusual thing that happens when you are 92-years-old -- making it rather difficult for her to leave the house, let alone attend her beloved church. Or rather, her former church.

See, after King was absent from service for several weeks, and more importantly unable to pay her weekly "tithe" to the collection plate, the First African Baptist decided the best course of action was to finally kick out this 92-year-old bed-bound deadbeat. She was just mooching off all their Jesus juju anyway!

King's family received a letter in the mail signed by the pastor of the church, informing them that because Josephine had not provided “constant and consistent financial and physical participation,” that this counted as a show of "non-support" towards the church and thus she was no longer welcome to attend services. Jesus is a pretty harsh collection agent. One missed payment and now she's spiritually bankrupt.

While King's family has informed the press of this incredible act of church greed, what makes Josephine King's story all the more egregious is that it isn't the only one; not by a a tap-dancing mile. Churches requiring, not just urging, tithes have been popping up all over the country, and in many cases their schtick is less "Please donate to the church bakesale kplzthx" and more "You have been found negligent on your spiritual loan payment. You have 30 days to comply."

Back in July, the Greater Mount Moriah Primitive Baptist Church in Florida checked their tithing books (they seriously keep up on which members contribute what amount in tithes), and realized that Candace Petterson, a woman who had joined their church only six months ago, hadn't kept up on all the fees they never told her about, so they decided to send her a delinquency notice for $1000 in unpaid tithes:

The single mother said she received what amounted to a delinquency notice from her new church asking her to contribute [at minimum] $50 a month, along with other assorted fees, to remain a member in good standing and vote on church matters.

The predominantly black church, which has operated for more than a century, asked her to pay a yearly $250 anniversary fee and another $150 for Mount Moriah Day – amounting to $1,000, some of which would be set aside to pay off church debt.

You know what's a pretty great extortion racket? Lure someone in with promises of cool stuff and then slam them with fees you intentionally withheld from their knowledge. It's comforting when your church operates on the same business model as a loan shark.

And oh yeah, did we mention the church didn't just ask the mother to pay, but also tried to bill her 11-year-old daughter?

The letter, from assistant administrator Ladreda Spencer and Pastor B.R. Fulton Jr., also reminded Petterson that children – including her 11-year-old daughter – were expected to pay [at minimum] $5 a month to the church in addition to two annual $15 fees.

We sometimes joke about bad people stealing milk money from kids, but this church is actually doing it. They expect her daughter to show up to Sunday school with check in hand.

If you thought that was all, you are far too optimistic to read this blog, dear reader. In one of the most heinous stories of its kind, back in November a Texas church refused to hold the funeral for a lifelong member because she didn't pay tithes during the last two years of her life. Why didn't she pay for those two years, you might ask? Oh, just the fact that she was bed-bound in hospice for two years and IN A FREAKING COMA for the last few months. Should have updated your "vegetative state" exemption clause.

Olivia Blair was 93 when she passed away, having been a member of the Fourth Missionary Baptist Church in Houston for some 50 years. She did everything at this church, including holding her husband's funeral there six years previously. But when Blair went into hospice, the cost of her care and prescriptions left her with only $60 a month left over from her Social Security check, an amount that Reverend Walter F. Houston apparently still expected her to pay him. After Blair died, her daughter and granddaughter returned to the church to arrange for their mother's funeral, only to be told by Reverend Houston that because she was negligent on her tithing, the church had already rescinded her membership and would refuse to hold the funeral.

Even after Blair's daughter explained to the reverend that her mother was on a minuscule fixed income even during the days she was conscious, the reverend only told her, "If Mrs. Blair didn’t have the money for her tithes, then it was the responsibility of the family to remember the tithe." In other words, it isn't a tithe, it's debt. Tithes don't transfer to a family member when a person isn't able to pay it. That's debt, asshole.

When confronted by a church activist calling himself "Pimp Preacher" (ignore the bloviating), the reverend told him, "I am not changing my bylaws for someone who was not active... If the family cared so much then why didn’t one of them at least send at dollar over here to reserve her membership[?]" The reverend seems to have his church confused with a country club or a dog park. You don't lose the privilege to use the baptismal dunking pool just because your yearly check is late.

It isn't your Wonkette's place to judge (lie), but it seems that if these churches want to keep up the facade that their tithe collection systems are just isolated incidents that COINCIDENTALLY have the same MO as a credit agency, maybe they should rethink their business models. Because as RawStory so helpfully points out, requiring church tithes is actually illegal, and is one of the prime criteria for having your tax exempt status revoked. It's what happened to that fun time nightclub Jesus gangbang, and people actually LIKED that place. And speaking of churches built on golden mountains of greed and avarice...

If the headline didn't give it away, this next story is NSFW for rock hard statue wang and glutes of chiseled marble. Or more accurately, poplin.

It's time again to check in on America's favorite maybe-murderous sitcom family, the Scientologists! When last we left our heroes, they were reeling from the blowback after HBO aired the documentary Going Clear, a look into some of the more unsavory practices that can be definitively linked to the Church (that isn't including the more heinous indictments of negligent homicide), the church went into a bit of a PR rabbit hole, laying low for months in hopes that the negative press would eventually blow over. Only problem is that during that time nobody remembered to blow resident cash cow Tom Cruise (really big on the negligence, these people) and it seems the only way to keep the star happy in his gilded cage was to give him a brand new footlong penis. Allegedly.

It seems that at the end of July, a new 14-foot statue of Tom Cruise, naked and majestic holding a Scientology cross, was unveiled in St. Petersburg, Florida, only a few miles away from the Scientology HQ in Clearwater. Dubbed "The Shroud of Scientology," the statue is the work of local artist Daniel Edwards with assistance by Cory Allen Contemporary Art. The work was unveiled at what has been referred to in the press as a "pop-up church of Scientology" though we can't find any indication of what the bunk that means. Is it like a pick-up game of basketball? Either way, the exhibit also included a commemorative coin of Cruise's likeness, like he's a dead emperor or something.

Whatever this poplin pornography is, the artists behind the work claim that they made the piece to celebrate Tom Cruise's 25 year anniversary with the church, supposedly as part of larger celebrations the church has been having lately to commemorate to their 25-year fucking creepy ass obsession with Tom Cruise. Whoever is behind the statue is not clear, especially since the artist resolutely refuses to spill the frank 'n beans. But after news blogs circulated the insanity that is a giant uncut statue dong, the Church went into damage control and disavowed any involvement with the project.

For months rumors have been traveling the gossip blogs that Cruise is contemplating leaving the church now that his daughter Suri is growing up and apart from her no-longer custodial father. We're not saying the church gave Cruise his own gigantic tallywhacker to try and stroke his ego (and a few other things) one more time, we're just noting that it's an interesting coincidence.

The Church continues to deny they were behind Wanggate, and we're willing to take them at their word. Whether or not the Church was secretly behind it and pulled their involvement after it became a laughingstock is not for this little dog and pony show to investigate. That is the duty of serious and professional cock investigators. All we do know is that "Scientology Giant Dick" was not the sound bite they wanted making the rounds on Twitter.

On a final note, we would like to say how much we love this artist, if for nothing else besides his answer to questions about why so many thought Tom Cruise's pork sword looked huge. Quoth Edwards: “I felt that he’s being depicted proportionately and I’m not sure what to make of it.” Honest reaction, or subtle hint that he's packing? Ladies, you decide.