The State Of The Wonkette Union Is 'Grifty' 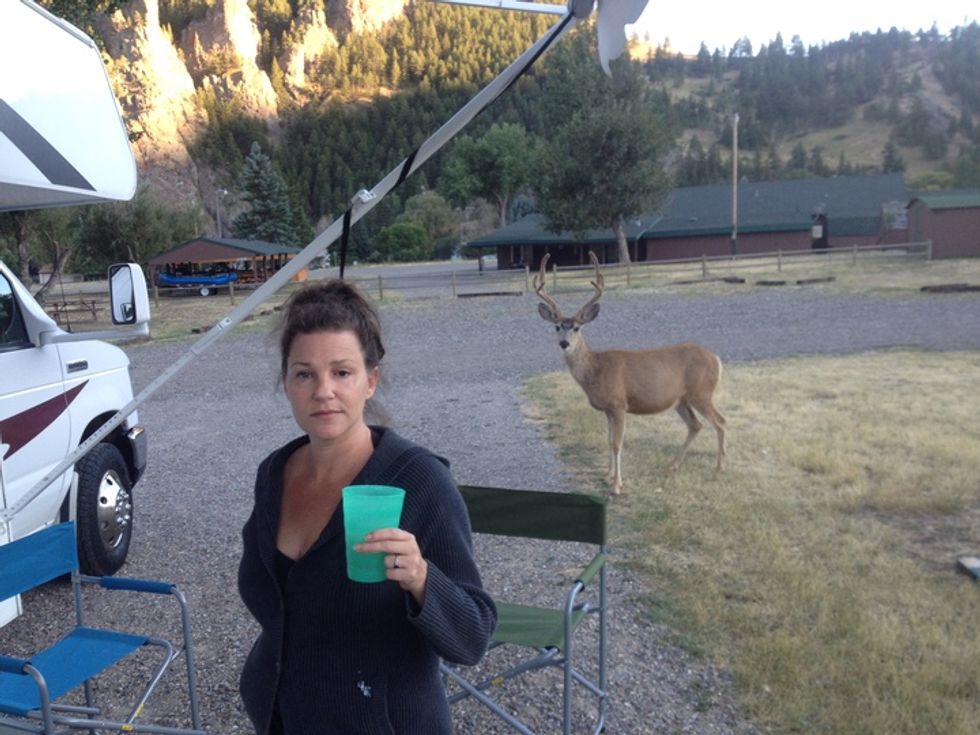 Friends, Wonkers, perverts, lend us your danglies and your girl-danglies, and also listen up, sons (and girl-sons)! We come before you today to tell you that in 2015 you gave Wonkette $79,071 straight from your EBT cards, and that doesn't even count what we tapped straight from your wired-open eyeballs like that scene in A Clockwork Orange! I mean, it's no "bigot pizza," but holy shit! YOU GUYS.

So what did we do with your moneys, besides hookers (so much hookers) and "living" "inside" "shelter" like we are the Queen of England? Some things.

We hired some folks.

This guy Evan Hurst, you hear of him? He is the literary star of Memphis and he is young and handsome and gay and disgusting. He looks like this.

Just kidding, that is Aaron Schock maybe? Well, it's someone gay anyway.

Fame and fortune except the fortune part.

There, that is much better. Evan has made our lives richer with his sexcellent social media skills, his speed and dexterity in blogginess, and his wildly creative epithets for the assorted diddle-fingererers of the Duggar clan :(

Evan brings Wonkette's full-time staff from its low of "me" four years ago to its high of "five" now, because we are job-creating-businesswoman-entrepreneuring as fuck.

[contextly_sidebar id="wLu5G2oCchRJd8z5t4XEJC1JyMT94PNh"]We also hired this fellow C.A. Pinkham, sort of; we did not hire him full-time but did save him from complete penury after Gawker lost its damn mind and decided to throw all its resources into politics. (For the record, we are still WTFing over that particular strategery, but we entertain ourselves by looking at Quantcast and playing "how much traffic can one website bleed?") You have clearly been enjoying his "Off the Menu," which is not at all "Behind Closed Ovens," because the Gawker Media lawyers said he could not have that name even though they don't want it anymore, which is what we in the journalisms call "a real dick move."

The first time C.A.'s post ran, we noted with piping-hot rage many new commenters calling our website ugly and bragging about their ad-blockers, which was a bit ironic as they were READING ABOUT PEOPLE NOT TIPPING AND WANTING SHIT FOR FREE. But then we got a steady stream of people ponying up a buck or two per month, and we realized we wouldn't have to kill them and they were being very ethical, and we decided to like them even though they were from Jezebel.

My husband made this "ad-fewer" version for you. Here is how it works: you pay us between $5 and $100 per month, and we take away the boob ads! (#RIPboobs.) So far, about 220 of you have taken advantage of this; meanwhile, TalkingPointsMemo has NINE THOUSAND MEMBERS. Are we really only one-forty-oneth as good as TalkingPointsMemo? FUCK THAT SHIT, YOU SIGN UP NOW. Or just keep up with your ad-blocker and that buck or two per month, that's cool too.

We got a better server, by which I mean we bought an RV.

So, this one time? Our server was all "blah blah blah we are a terrible server and every time you call us and say 'hey, I think we are having a DOS attack?' we will turn around and say OH YEAH SAYS WHO and then a month later we will be all oh yeah you were right about that DOS attack, sorry we NEVER DID ANYTHING TO HELP AND SAID YOU WERE IMAGINING IT." Anyhoo, we put out a call for money for new servers, and that is when you sent us NINETEEN THOUSAND DOLLARS IN TWO DAYS, and we said, hmmm, okay, that is like almost a year's worth of servers and TEN THOUSAND DOLLARS LEFT OVER, so that is when we bought an RV, or, to put it more business-expensy, "the Wonkette Wonkebago Mobile Command Center."

What did we do with our Wonkebago? What are the places we went and the people we see'd? They were many!

[contextly_sidebar id="YOb4ZHDx2P7p9XpCm2OYW8wyVfTCIecB"]We bought you beers in Denver, Boulder, Las Vegas, Portland, Los Angeles, Oakland, Orange County and Chicano Park, San Diego. Remember Brian, who crashed our party and cited historian Bill O'Reilly as an authority on anything? Classic Brian! We bought you beers in Santa Fe and Salt Lake City, where we were greeted as liberators! (Be like Salt Lake City, you guys; a delegation met us at the home of the stunning mid-30s doctor/trapeze school owner whose driveway they'd secured for us; they took us sight-seeing; and they let us buy them so many cocktails when we annexed their Drinking Liberally like it was the Sudetenland.)

[contextly_sidebar id="iwq7MpknVOo8eG4yDX6SfKabg73o3OVE"]Also, we got kicked out of the militia's motel room, for real.

Hey, soooooo ... we are going in the Wonkebago to all the primaries and all the things next month, right?

Feb. 1: Iowa Caucuses. Are you a proud Hawkeye sportsballer, like Carly Fiorina? Do you live somewhere conveniently off the 80? Would you like us to park in front of your house? Hit me up in the emails, fuckers, let's make some shit happen.

Feb. 3: Chicago. Darling dears, come and see us, you know who you are.

Feb. 4: Detroit. Wherein we revisit the crime scene of the very first Drinky Thing (I think), and also see my little brother, this one.

No, the one on the left.

Sometime between Feb. 10 and Feb. 19: New York, Washington DC, etc. Want us to come to your town? Are you on the way from DC to South Carolina? Got bribes in the form of ass, gas, or grass? THEN OKAY!

Also, DC, you will have a special guest star by the name of "Kaili Joy Gray," who may or may not have just moved herself to the nation's capital so she doesn't have to keep starting her work day on stupid West Coast 5 a.m. time, who can ever know.

Feb. 20: South Carolina. Somewhere. We don't know. Where are all the Donald Trump victory parties? Spartanburg?

Somewhere between Feb. 21 and Feb. 24: Memphis! Don't you want to meet Evan Hurst? US TOO!

How can you help?

We made you some more stuff for your boobs, because boobs.

Oh, you needed a onesie? DONE.

OOOOH LOOK AT THAT PUNIM.

Oh, you needed to be Best Friends Forever with someone with whom you only agree on 95 percent of the things? Friendship is magic.

Here you go, buy all of the things.

Here are all of the baby pictures you could ever need, until we post more.

This concludes our stockholder report, lol as if

As you can see, we did real nice things with all of your moneys, now please send us eight times as many, for #freedom and also we'd like a bigger RV.

That one will do just fine.