The Time Merle Haggard Played The Nixon White House, Even Though He Was A Felon 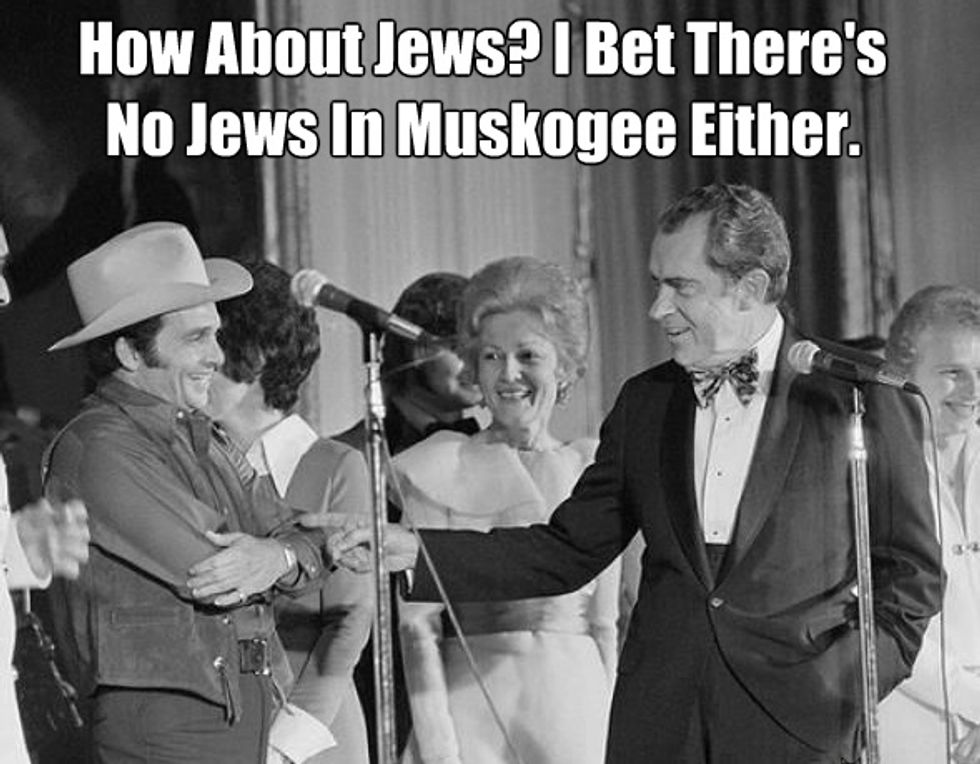 Country music legend Merle Haggard died Wednesday on his 79th birthday, but did you know that it was once Very Controversial when he performed for Pat Nixon's birthday party at the White House on March 17, 1973? Not merely because it wasn't really her birthday -- she was born March 16, but the Nixons always celebrated it on Saint Patricks' Day -- but because Merle Haggard was 1) a bit out of place in his boots and cowboy hat, while everyone else was wearing tuxedos, and he was 2) -- gasp! -- a convicted felon whose biggest hit was 3) an anti-hippie protest song. As Rick Perlstein recalls in The Invisible Bridge: The Fall of Nixon and the Rise of Reagan (his excellent follow-up to Nixonland, which should be mandatory reading for everyone), everything felt a little weird, even to Haggard himself, who was invited to play his odes to the common man and patriotic indignation "Okie From Muskogee" and "The Fightin' Side of Me":

He later said it felt like performing to mannequins. Came the dramatic highlight: a giant American flag rose from the back of the stage. Haggard swung into his law-and-order hit, “Okie from Muskogee."

The New York Times observed an incongruity: the president had three days earlier sent his message asking Congress to attack crime "without pity," but Haggard was a felon, convicted for robbery. The next week the Chicago Tribune ran a query from a reader: "Do you know whether he's the first ex-convict to perform in the White House?’"

It spoke to an emerging dilemma: when people thought of the White House, crime was the image coming to mind.

Haggard was always coy about just how straight "Okie From Muskogee" was meant to be taken, but he was happy to perform for Nixon -- not just at the White House, but at the Grand Ole Opry in 1974, where Tricky Dick himself stiffly sat at the piano and banged out a couple tunes -- those great Country tunes "Happy Birthday" and "My Wild Irish Rose." Haggard also played the White House for Ronald Reagan in 1982, which was sweet for Haggard since Reagan had pardoned him while he (Haggard) was doing three years in San Quentin for attempted burglary.

And yet Haggard was no kneejerk rightwinger, either; when he received a 2010 Kennedy Center award for his lifelong contributions to the performing arts, Haggard told Rolling Stone he had a favorable impression of the president who greeted him there, too:

It was also nice to meet Obama and find him very different from the media makeout. It's really almost criminal what they do with our President. There seems to be no shame or anything. They call him all kinds of names all day long, saying he's doing certain things that he's not. It's just a big old political game that I don't want to be part of. There are people spending their lives putting him down. I'm sure some of it's true and some of it's not. I was very surprised to find the man very humble and he had a nice handshake. His wife was very cordial to the guests and especially me. They made a special effort to make me feel welcome. It was not at all the way the media described him to be.

What's the biggest lie out there about Obama?

He's not conceited. He's very humble about being the President of the United States, especially in comparison to some presidents we've had who come across like they don't need anybody's help. I think he knows he's in over his head. Anybody with any sense who takes that job and thinks they can handle it must be an idiot.

Did you talk to the President much?

I told him, "You and I have something in common: our wives are both taller than we are." And he said "No! She's got on 3-inch heels! And she is not that tall!" He was like me. He grabbed that real quick.

We'll confess that what we know about country music could fit on the O Brother, Where Art Thou? soundtrack CD, but our impression is that Merle Haggard was a class act, and he will be missed.