The Top Two Sickest Pete Souza #TrumpBurns In The Past 48 Hours, Because He Only Did It Twice 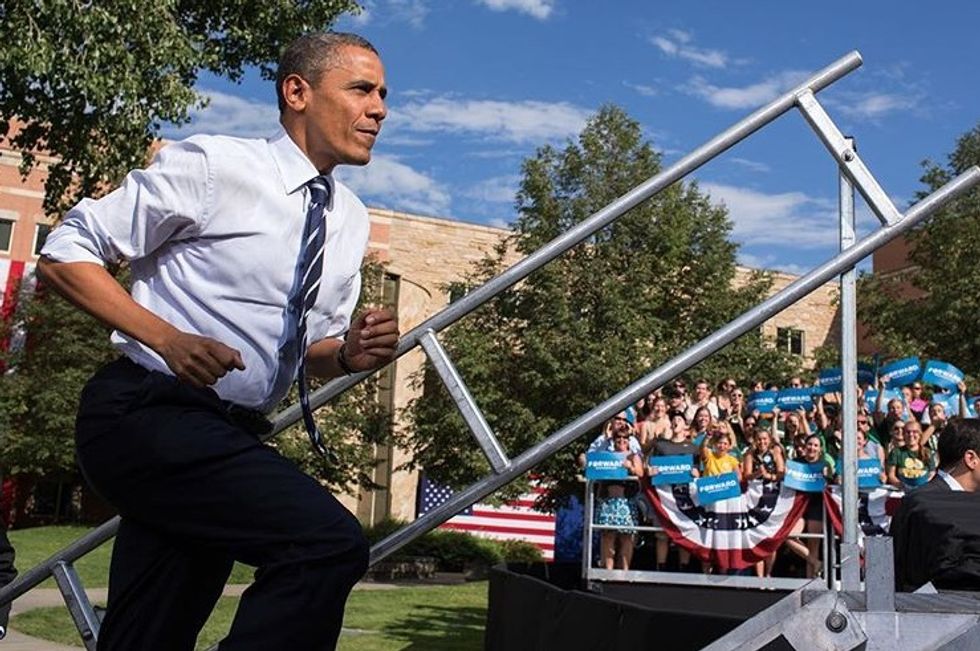 Capable of running and also stairs

Oh man, that Obama White House photographer Pete Souza is a DELIGHT, isn't he? Besides how he spent years taking beautiful pictures of America's Last Actual President, he's spending his Trump years just cold dunking on Donald Trump every chance he gets, and he does it with pictures of Barack Obama BEING A REAL PRESIDENT. There was the time Souza posted all Obama's Time magazine covers, just to remind Trump of how he never gets on the cover of Time. When Trump was embarrassing himself and offending military families (LOL as if that's only happened once, but we specifically mean the time he was saying lies about how Obama never called military families), Souza posted pictures of Obama goofing off with wounded vets at Walter Reed. Here, have a fake news CNN article about how much Souza loves to troll Trump. SPOILER: it is a lot.

Souza has had two fun opportunities in the last 48 hours to make Trump look ever smaller than he is. Here they are, ranked in order from bestest to greatest:

GET IT? Because when Donald Trump woke up this morning, he rolled his whale body out of bed, slithered over the wrappers from last night's bedtime Big Macs, and immediately started tweeting "WITCH HUNT!" because "Fox & Friends" said there was a WITCH HUNT! and the president takes his orders from "Fox & Friends."

We like Obama's witch hunt better, because at least he found a witch, unlike that weak and sad loser Trump.

Back in the day when our President could run.

OK this one is even more awesome, in light of how Donald McBoneSpurs is absolutely certain that, if he had been at Marjory Stoneman Douglas High School, he would have stopped that mass shooter with his bare Kitten Mitton paws, unlike everybody else. Of course, there'd better not be any stairs in that school, because we all know Trump is #skeered of stairs. Also, he is terrified of sharks, so if there is a mass shooting anywhere near #ocean, President Shit Body ain't gonna save you there either.

Quick reminder of how Trump actually reacts when he hears something go boom:

Anyway, look at that sexxxy President Obama up there, running and bravely going UP stairs like it is nothing in the world! What is he, Superman?

We tried to find a bunch more examples of Souza dunking on Trump recently, but it seems he's been busy out in Washington state visiting with and taking pictures of singer/songwriter/all around badass Brandi Carlile, which made us queen out a little bit TBH, because we love it when we find out people we adore and respect also adore EACH OTHER. Look!

Spent a few days last week with Brandi Carlile and her band as they rehearsed for their upcoming tour. Their new album, “By The Way, I Forgive You,” debuted at #5 on the latest Billboard chart, which was just announced today; she is the only woman artist in the top 20. And the #1 selling album of the week. Just sayin’. And although there was no one in the audience during band rehearsals, she and the twins still cut it loose.

Listen to Brandi Carlile's seriously incredible new record here and order it here if you know what's good for you.