Trump Inaugural Poem By Self-Published Poet Is Epitome Of Trump: It's TERRIBLE 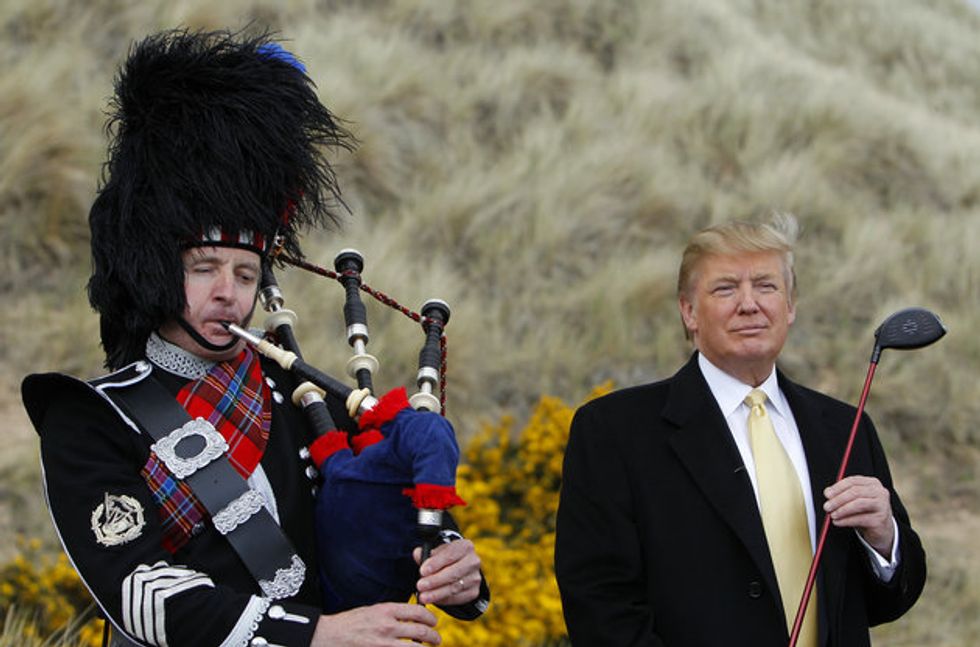 While Team Trump has had a heck of a time getting anyone to perform at his inauguration, he will be having an official inaugural poem read at the ceremony, a first for a Republican president. The poem was written especially for him by Vogon poet Joseph Charles McKenzie, who has neither a Wikipedia page about him, nor any books or chapbooks or anything available on Amazon. It is a very, very, very bad poem. It is possibly one of the worst poems I have ever heard in my life, and I grew up in the 1990s and spent a lot of time at coffee shops.

The only thing I could find out about this Joseph Charles McKenzie character is that some people on some Catholic message board thought he was "behind" a site called LayPopes.com. That site doesn't exist anymore, so I cannot tell you what that was about. According to an article in the Independent about the poem, he is an American poet and a member of the Society of Classical Poets. They also say he is "celebrated" here, but by whom, we cannot be sure. I even asked a few of my poet friends if they'd ever heard of him, and they had not, so it's not them.

However, he does have a website! Where he sells his poetic wares much as one would sell a product ending in "o-matic."

His website also notes that he was on French TV one time, and that he translated a bunch of poems from the French Renaissance into Middle English, which was not a thing anyone wanted or that even made any sense, given that people stopped speaking Middle English at around the time the French Renaissance started. Basically that is about as useful as someone 400 years from now translating this poem that he just wrote into Esperanto.

The poem itself is meant to be an ode to Trump's Scottish ancestry, and it's received some press already over the fact that it refers to President Obama as a tyrant -- but honestly, that is not even the dumbest part of it. It is a tale told by an idiot, about an idiot, and what it lacks in sound and fury, it makes up for in absolutely nothing.

So let's take a look, shall we?

"Come out for the Domhnall, ye brave men and proud,

The scion of Torquil and best of MacLeod!

With purpose and strength he came down from his tower

To snatch from a tyrant his ill-gotten power.

Now the cry has gone up with a cheer from the crowd:

“Come out for the Domhnall, the best of MacLeod!”

OH, so get it? Dohmnall is Donald, because it's a SCOTTISH style po-em, and his mom's maiden name is MacLeod, and Torquil McLeod was the first chief of the MacLeod of Lewis clan. McKenzie is, himself, the hoarse raven croaking the fatal entrance of Dohmnall under our battlements. Also, the tyrant is OBAMA, and his power is ill-gotten because he is a secret Kenyan Muslim. Or something!

When freedom is threatened by slavery’s chains

And voices are silenced as misery reigns,

We’ll come out for a leader whose courage is true

Whose virtues are solid and long overdue.

For, he’ll never forget us, we men of the crowd

Who elected the Domhnall, the best of MacLeod!

Oh yeah, boy, does he ever has some good virtues. He has all the best virtues. People love his virtues. Virtues like greed and adultery and grabbing women by the pussy and lying all of the time. Those are virtues now.

When crippling corruption polluted our nation

And plunged our economy into stagnation,

And plump politicians reneged on their promise

The forgotten continued to form a great crowd

That defended the Domhnall, the best of MacLeod!

YEAH, it sure is Obama's fault for inheriting a recession! Damn him!

Next is where it gets REALLY good though.

The Domhnall’s a giver whilst others just take,

Ne’er gaining from that which his hands did not make.

He’s enriched many cities by factors of ten.

The honest and true gladly march with the crowd

Standing up for the Domhnall, the best of MacLeod!

AHAHAHAHAHAHAHA! Now we are dead, because all of that is the exact opposite of true. And, while he has employed "good men," we are sure, he has a habit of not paying them.

True friend of the migrant from both far and near,

He welcomes the worthy, but guards our frontier,

Lest a murderous horde, for whom hell is the norm,

Should threaten our lives and our nation deform.

We immigrants hasten to swell the great crowd.”

Coming out for the Domhnall, the best of MacLeod!

Unless they're Muslim! Or from Syria! Or um, not an immigrant. Yeah, best if they're not any kind of immigrant at all, unless they are a model who is planning to marry Donald Trump or let him grab their pussy. Also, um, Joseph Charles McKenzie was born in New Mexico, so I'm not really sure how he can say "we immigrants."

No longer policing our words and our thoughts;

Its ignorant hirelings pretending to teach

Are backward in vision, sophomoric in speech.

Now we learnèd of mind add ourselves to the crowd

That cheers on the Domhnall, the best of MacLeod!

Three cheers for the death of academia! Yeah! Fuck all the smart people! They are the worst, huh? Always going around telling learnèd people not to use racial slurs, or something! Or being insulted when someone says something insulting to them! Yeah, we're not gonna have to listen to smart people anymore, or pretend as if we were ever doing that in the first place! And, again, fuck smart people!

The poor man, the sick man, with young children crying,

The soldier abroad and the mother who waits,

The young without work or behind prison gates,

The veterans, wounded, all welcome the crowd

That fights for the Domhnall, the best of MacLeod!

This part is literally just a list of people who are going to be fucked by Donald Trump's presidency.

If you are worried that he would not also get in a shot at feminists, you would be wrong.

Teach women to look and behave like us chaps,

The Domhnall defends the defenseless forlorn;

For, a woman’s first right is the right to be born.

Now the bonnie young lassies that fly to the crowd

Have a champion in Domhnall, the best of MacLeod!

Thank GOODNESS Domhnall is here to teach all us bonnie young lassies of our true purpose -- to be hot enough to make a man want to put a baby inside of us, and to then have that baby, whether we want one or not. Finally! Someone to rescue us all from the immense societal pressure to not conform to societal beauty standards! Someone who will stand up for the women who really want a thigh gap! Or for the men who really want a lady with thigh gap and have been deprived of one by feminists? I'm not sure. Who is it that's supposed to be benefiting here?

OH. I get it. OK, so feminists, who are women, are preventing other women from achieving their lifelong dreams of being hot and popping out babies. Somehow! And they're being forced to listen to us the same way all the academic people forced the "learnèd" Trumpians to not use racial slurs? I honestly don't get how any of this works, and I also don't recall any period within the last eight years when people stopped being racist or women who wanted to be baby-having sexpots neglected their dreams because they were so scared of us.

In conclusion, this po-em is completely insane and it's weird that it is a real thing someone wrote. This once again proves my theory that the reason why liberals dominate things like poetry and the arts is not due to some kind of mafia-like stronghold we have on them, but because, for whatever reason, we are just a lot better at it. I guess if you are the kind of person who is dumb enough to think that Donald Trump is going to be great for black people, women, poor people and immigrants, this is the kind of thing you think makes for good poetry.

For a palate cleanser, please allow me to gift you with a much better poem, written by an actual true Scotsman, and read by Ron Swanson.

Update By Yr Doktor Zoom:HuffPo says the poem is a big ol' fakey-fake, or at least that it's not an official inaugural poem. Whether the perpetrator is truly a bad writer or a brilliant troll/con artist remains to be seen. See longer update at end of the Poetry Contest Post