The Washington Monthly Recommends Books And Trains To Obama 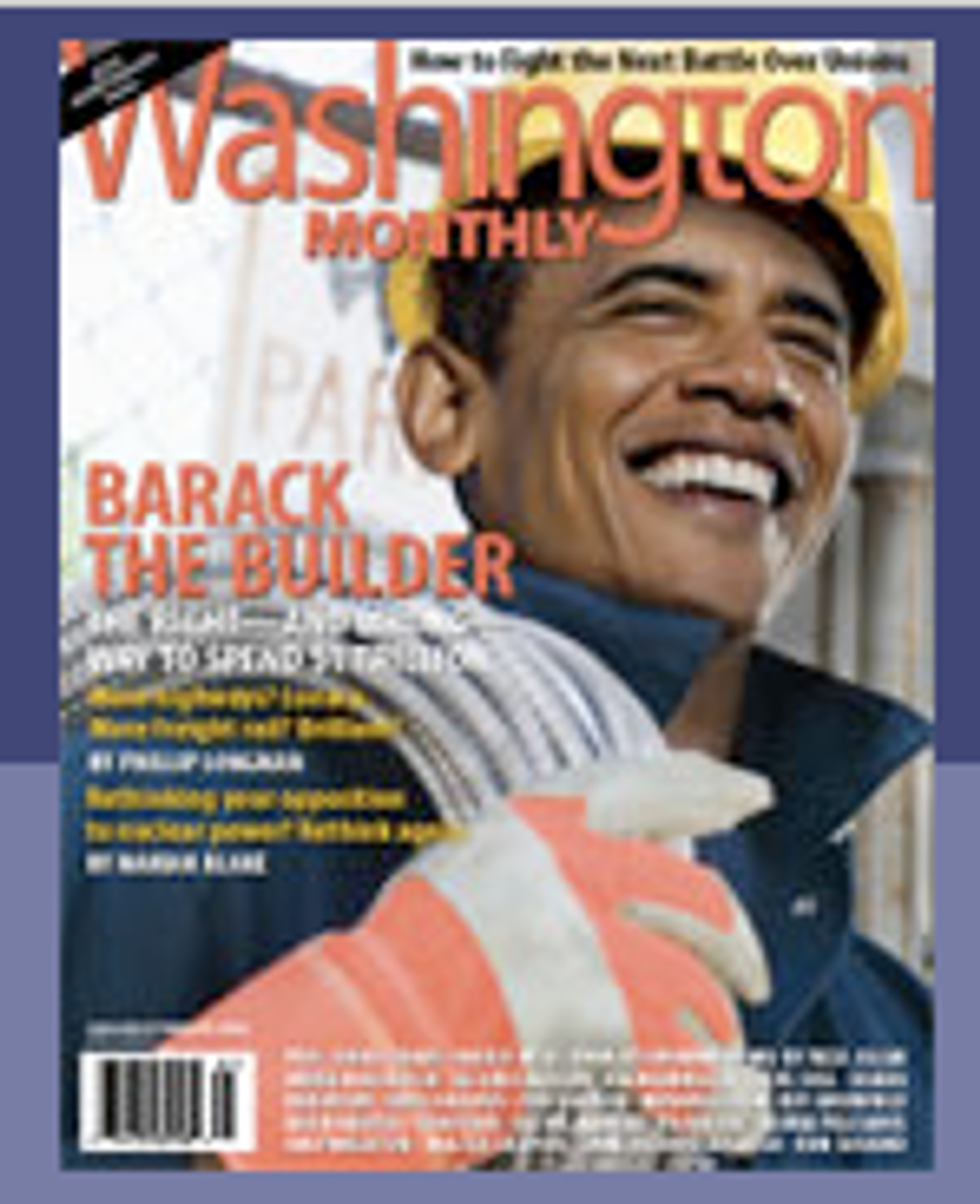 Gather ye rosebuds everyone, it's time to read a magazine, as isour long-standing Thursday afternoon tradition. Let's see, let's see. How about The Washington Monthly, which has proudly resisted becoming in any way trendy since its inception. Come now, let's take a look inside and maybe figure out why. (Early guess: nearly every article title is a pun?)

"Back on Tracks": Virginia is investing its time and money in the latest of fashionable technologies: a railroad automotive machine! These "trains" will solve the following problems: highway collisions, the recession, global warming, and what to do with all the dilapidated railroad tracks. But no fat cats in Washington are taking these trains seriously you see, even though back in olden times all the tycoons talked of nothing but trains. In conclusion, the public must be taxed heavily, so that they -- and their goods -- can ride in more of the trains they don't bother to ride now. [Back on Track]

"What Obama Should Read": Here are 25 books that President Barry should read. Like the "25 things" forms on Facebook that, like many things, literally did not exist until the New York Times willed it to, with a trend-piece, the Monthly rounded up some intellectuals and writers, all of whom know just what our President should read. Such books range from wonky books about Africa to wonky books about the Middle East, and a Graham Greene novel. [What Obama Should Read]

"Bad Reactors": Ever heard of Finland? It's like a Utopian hostel that decided to build itself a nuclear reactor, a decision that was beloved by the entirety of Earth. Eh, except turns out the reactor was actually kind of poorly made, oh and also it's not really that good for the environment after all. This wouldn't matter at all really, it being Finland, but this thing is a precedent-setting creation, and if it ever stops sucking, it could effect nuclear energy policy in the US. [Bad Reactors]

"The Little Unions That Couldn't": Despite Obama's best efforts to make sure that everyone gets along (not red states or blue states, but United States, etc.), the thing that might actually put a wedge into his weird plan is this, the Employee Free Choice Act, which would make it easier for employees to unionize. And if there's one thing that Republicans hate more than fact-checking or having sex with their wives, it's unions. Oh, and the Clintons. And Nancy Pelosi. But we digress. Another mortal enemy of the EFCA is Rite-Aid, the innocuous-seeming beast that's undoubtedly underneath your apartment building at the very moment. Caution, gentle readers. [The Little Unions That Couldn't]