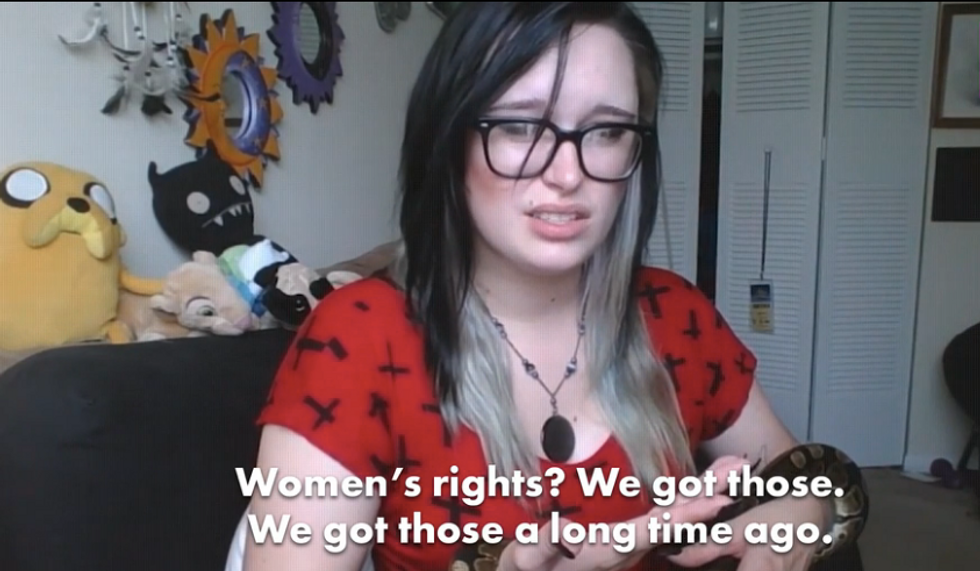 Hello! And welcome to your weekly jaunt through the dark and seedy and ultimately very depressing underbelly of the Manosphere. This week, I thought we'd take a look at some of the women who have decided to ally themselves with the men's rights movement.

Now, women opposing feminism is nothing new. Hell, some of the loudest voices opposing women's suffrage were those belonging to women. Of course, there was also Phyllis Schlafly, and every girl you knew in high school who "like, so much more of a GUY," and not any of those bad things women are and wishes you could just be as cool and chill with rape jokes as she is.

These days, as with everything else, anti-feminism for women is becoming an identity. And, actually, a rather profitable one for many women on the internet. An easy way to make a ton of money on YouTube is to make a video about how you are a woman and NOT feminist. Because, unlike those nasty feminists, you like men, and said men never need to worry that you are not going to have shaved legs.

There's even a ladies ONLY version of The Red Pill subreddit, in which "Red Pill Women" earnestly discuss how to be perfect, submissive, non-nagging wives or girlfriends to their partners, even when that kind of weirds their partners out because they did not actually grow up in the 1950s.

I've been a lurker. I have been on the path to red pill for awhile now. I had a conversation tonight with my husband where I told him I would like him to lead our family. He asked what I meant and I told him that I wanted him to have the final say in major decisions with our family. He said he tried to do that before and he was rejected by me. Technically that is true. In the lead up to my red pill desires, I would try to convince or persuade him that we should do what I want. A typical scenario would be, I want xyz. He would say no because of xyz. I would say but xyz. He would say fine I support you. I told him that's not what I want anymore. If he were to say no, I want to follow. I told him I appreciate the way his mindset is and accept that he is the leader of our family. Not that I would follow blindly. But that I trust his decision. This ended up in an argument where he very specifically told me it is sickening that I think that way. He said "I am not your father and you need to act like a grown woman". This seriously messes with me. Since I have been leaning this way for a few years now, I was quite alarmed to here him say this. Yet it provoked doubt in my mind of "do I really want this?" Years ago I was insistent on being a very strong woman. A force to be reckoned with. As I started to shed my "toughness" I thought everything would fall in line. Now I'm about to lose my husband over it and so confused.

Yeah, I think I'm Team "That Lady's Husband." Of course, the Red Pill women had a different take, suggesting that it was bad that she was even telling him to lead, because that was still telling him to do stuff, which is bad.

By having this discussion with him you are actively saying that you are the true leader but you will ALLOW him to take the lead now. You should just follow him and see what happens.

DUH, you can't just go and tell your husband you're going to be a Stepford wife. You need to go over to the Men's Association and get roboticized on your own, so it's less stress for him.

A fun new addition to the FeMRA scene are the "Lovely Ladies of Men's Issues." Three women who are currently making a pin-up calendar to raise attention to men's issues by showing them their boobs. Not that I have any issue with boob-showing, mind you. Do what you want! Frankly, I'm just wondering who even buys calendars these days anyway.

Their Indie-go-go campaign for the video explains that while they don't hate women (even though "Modern Medusa," one of the producer/models of the calendar says "feminism is cancer" like she's Milo or something), they just think that men are the real victims, and want to stand up for them, with boobs.

The first thing you need to understand is that we do not hate women. We believe in equality for both genders, and endorse the idea that helping men doesn't take away support from women. This isn't about hate, this is about love of all people. Except when it comes down to it, the greatest victims are those who are unable to have a voice, who are blamed for all the ills of the world. Men are expected to sacrifice themselves for the greater good, even if that means no one will be there for them when they are in need of help.

Men suffer at a greater rate than women in the western world, but you never hear about it.

If you're able to deal with listening to incredibly stilted speech patterns, they've got a video

The thing is, many of the issues they bring up are perfectly fine issues to bring up! They have an issue with circumcision -- lots of people have reasonable and fair issues with circumcision. In the event that I had a child with a penis, I don't think I'd do that. They note that men have higher suicide rates than women (though women are more likely to attempt suicide), and that men are four times more likely to get cancer than women, but the "majority of funding" goes to women who have cancer.

Though not mentioned in the video or elsewhere, it's likely that this calendar will address other common MRA issues -- like the lack of domestic violence shelters for men, that only men are eligible for the draft, or the fact that women are more likely to end up with full custody of children in divorce proceedings -- supposedly because the family court system favors women. This, by the way, is some serious bullshit. Only 4% of child custody cases even make it to the family court system, and 91% of all custody decisions are made by parents themselves with no interference whatsoever.

The thing is, there's no matriarchy enforcing circumcision. That's not a thing! If you want to make circumcision illegal, I suggest writing to your elected representatives, the vast majority of whom are men. No women are out there keeping prostate cancer charities down, or opposing domestic violence shelters for men. There is no privilege we could relinquish that would decrease the male suicide rate.

No one is saying that men don't have gender-specific problems. Of course they do. But the difference between these problems and those faced by women is that these issues are not caused by women, and are thus very unlikely to be fixed by women, which is rather evident given that the best thing these FeMRAs are able to come up with is a damned pin-up calendar.