The Week In Garbage Men: Misogynists Now Call Women Who Agree With Them 'Tradthots' 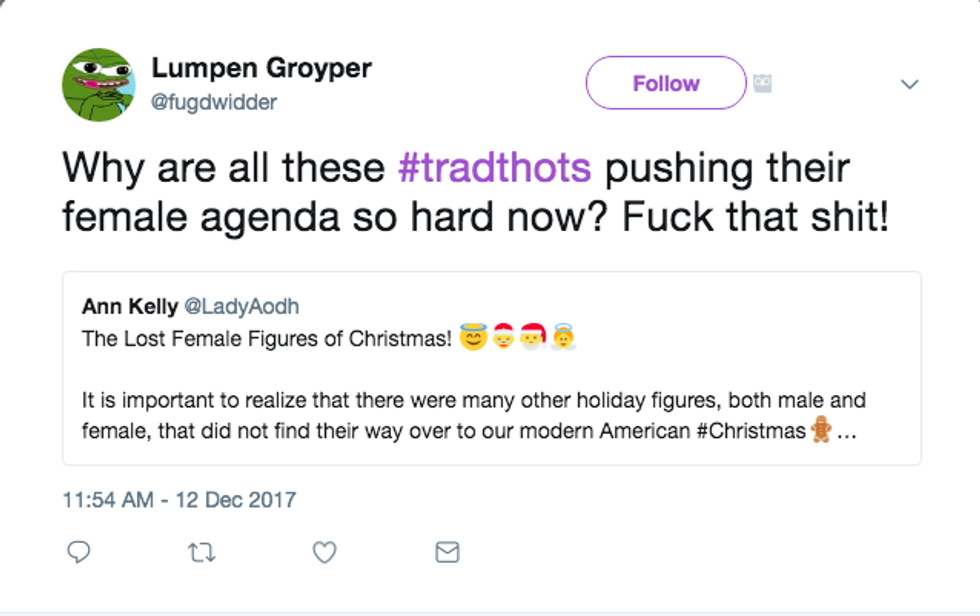 Well, it looks as though the day we all knew was coming is finally here -- the day the manosphere finally turned on the lady anti-feminists in their midst. Since even before Phyllis Schlafly, there have been anti-feminist women making a name for themselves by being all "Hey fellas! Look over here! I'm a woman and I don't think I should have rights about shit.

If you want to get a TON of views on YouTube, be a woman and record a video titled "Why I'm Not A Feminist." These women are often very popular, and many men like to point them out to feminists in order to say "Look! Not all women want rights and stuff! Some women think that is bad! Don't you care about those women and what they want? Guess you're a real hypocrite now, huh!"

A few weeks ago, Salon published an article about how "alt-right" women are starting to get a little frustrated with the way they are being treated by men.

White nationalist Tara McCarthy vented on Twitter about how she, as a woman, was being harassed by men who share her beliefs:

Women in the Alt Right are constantly harassed by low status anonymous trolls trying to put us in our place.

Women of all ages, who do or don't have children, are harassed for various 'reasons'.

The ultimate goal seems to be to bully us off the internet.

Men in the Alt Right are going to have to decide whether they will continue to passively/actively endorse this behavior, or speak out against it.

If you want more women speaking publicly about ethno nationalism, I suggest you choose the latter.

Guys, I'm not saying I can't take any trolling or harassment on the internet, *obviously* I can. I've probably had more of it than most of you will see in a lifetime, and I'm still here. Not going anywhere. I'm not stating the above solely for my own personal benefit. — Tara McCarthy ????? (@TaraMcCarthy444) December 3, 2017

The article also highlighted how Lauren Southern tried to explain why it was cool for her to not be married with babies, even though she was a "traditionalist." That she should be able to do what she wants without being attacked for it. Interesting!

As you can imagine, a lot of men on the alt-right and in the manosphere were displeased by these women and others. "Why, they're just like FEMINISTS after all!" they cried. Thus, they coined a new term -- tradthot -- a combination of "traditional" and "that ho over there" to describe these women.

Noted loser misogynist Matt Forney wrote about this phenomenon over on Return of Kings:

While I am not opposed to women participating in politics per se, the reality is that the majority of these “tradthots” are wolves in sheep’s clothing. Beyond being unoriginal and bland, tradthots like McCarthy, Southern, and more appear to be subverting nationalism for their own ends. They are converging the alternative media into leftism, no different than what SJWs have done to video games and other industries.

ROK readers and contributors are more aware than most that tradthots are not to be trusted. For example, some time ago, I was involved with a woman who called herself “alt right” and who claimed to want a traditional marriage, yet was also a bisexual alcoholic with a rep for cheating on her boyfriends. Following our breakup, she began dating a left-wing skinhead, then suddenly disavowed the alt right for being too pro-Trump and “anti-Semitic.”

There is a classy graphic to go along with all of this, of course.

The king of Return of Kings himself, Roosh V, has been on about this for over a year now.

The new anti-feminist will bash SJWs and their censorship efforts with great vigor, but when it’s time for society to stop them from opening their legs to sexy alpha males, they throw a temper tantrum. When it’s time to force them adopt traditional behaviors of maintaining a home instead of merely agreeing to traditional ideas in theory, they reveal themselves to be feminists at heart and use SJW language that labels you a “misogynist” or “rapist.”

He even made a video about it earlier this month, in which he also describes having dated a woman who said she loved Trump, only to later find out she did not love Trump.

One of Roosh's major issues here is that these women, who are not as wholesome as they claim to be, supposedly steal anti-feminist ideas from men like him, parrot them, and then take money from white knight beta orbiters who think they are sexy but also traditional. AND THEN MAKE WAY MORE MONEY AND GET MORE ATTENTION THAN HE DOES!

Rather than being good anti-feminists and not complaining about men treating them poorly, he suggests, they do exactly what feminists do whenever a man tells them what to do.

Curiously enough, towards the end, he actually suggests that it would be incredibly stupid for a woman to not be a feminist.

"There's no such thing as a female anti-feminist. There's only a woman constrained by the ability to do what she wants and a woman who is not. If she lives in the West and she has choice on what to do and who to date, why would she give that up to be trad? Why would a woman who has the ability to do whatever she wants artificially limit herself, unless she's trying to show off?"

Now, granted -- Roosh and these other men think that women ought to be constrained. But I guess they're at least being honest by admitting that women -- even those who claim to be anti-feminist -- would not actually enjoy that.

Naturally, Andrew Anglin of the Daily Stormer is also very upset about the tradthots.

There are usually downsides to trying to belong to a club that doesn't want you for a member.

Now, I don't know if these women are doing it for attention. It could be that, but it could also be that there are just a lot of Serena Joys out there -- who think that if they side with the anti-feminist men, that they will be treated better by them than all those other women are. That they will be protected and shielded and allowed to do what they want without facing criticism from these men the way feminists do. This, clearly, is not the case.

Do I think any of these women will suddenly realize that the men on their side actually hate them as much as they hate us and decide to become feminists? Probably not -- and honestly I kind of hope not, because many of them are pretty damned racist and we don't need that shit. But perhaps this should serve as a lesson to all -- joining clubs that don't want you as a member rarely works out all that well.

And now it is your open thread!

Yr Wonkette is very proud to be feminist! Click here to tip us!