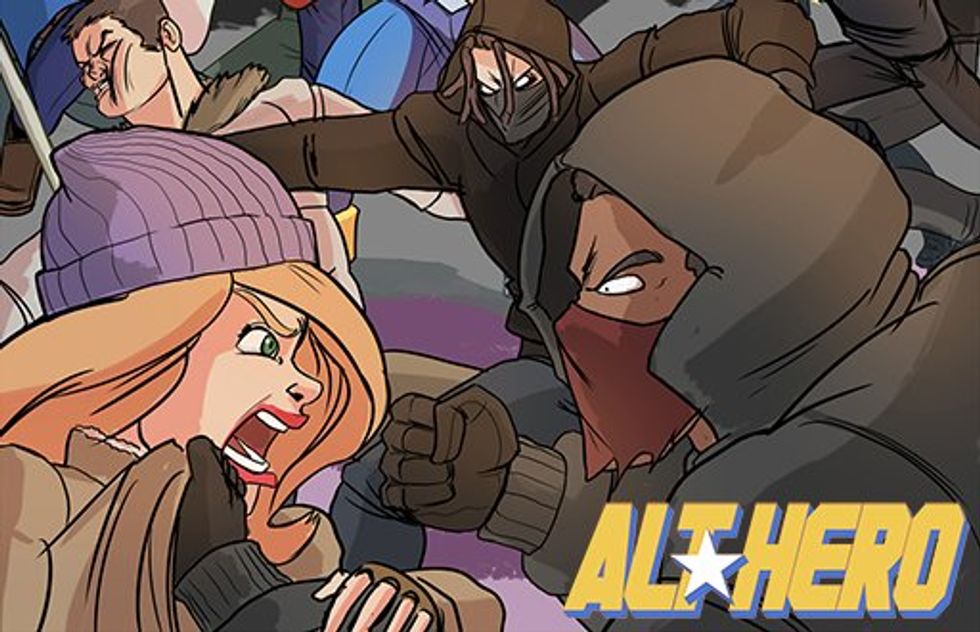 BRACE YOURSELVES, fellow social justice warriors -- for we are all about to be "triggered" like we have never been "triggered" before. Angry white men across the globe have raised $52,000 so far to help alt-Right MRA genius Vox Day publish a comic that he wrote, specifically for that purpose. Also to "replace" all of the DC and Marvel comics that have been "poisoned" by political correctness and turned all of his favorite white male heroes into LADIES or MINORITIES or SOMETHING. I don't know.

Unlike all the mainstream comics, this comic will have people smoking cigarettes and ladies in Confederate flag bustiers.

Naturally, it is called Alt-Hero. There is even a trailer for it, though I warn you that you may want to have your smelling salts handy before watching, because we do not want you suing Wonkette should you be "triggered:"

I myself was not actually triggered by this video. I can't tell whether that is because I am in a fog from all my cold medicine, or because it is painfully boring. I am guessing i is a mixture of the two.

According to the fundraising page for Alt-Hero, the comic itself appears to be about a world in which the Holocaust never happened, but like, some kind of atomic bombing did happen? And because of the atomic bombing thing, or maybe something else (No one knows! Maybe aliens!) some people got magic powers!

Some scientists believe Homo Sequens to be a consequence of the advent of atomic weapons, others consider it to be an indicator of alien intervention. Optimists consider them to be the next step in the evolution of Man, while pessimists fear that they will inevitably bring an end to the human race. Regardless, what is clear is that Homo Sequens is real, that it is rare, and that its individual members are invaluable to the government, or private organization, that can effectively harness their wide range of talents.

Unfortunately, the UN had to go and be a jerk about it and wouldn't let them do their magic powers, or join the military (????). But IN THE SHADOWS, a bunch of rogue people with magic powers decided to band together and fight immigrants and Antifa. Wow, what a good story line! Very compelling!

Following the announcement of this comic book series, Vox noticed that a few random people on Twitter (LIBERALS, PROBABLY) were making fun of it. He then surmised that this meant that they were all very scared of it, because of how it will expose them as the evil villains they are:

What I found the most interesting was the idea that anything short of an undefined “success”, which as we all know will be redefined and re-redefined as Alt⭐️Hero meets with the usual metrics of success over time, is tantamount to “sad humilation”. Think about how twisted one’s psyche has to be to make that connection, and what a crushing fear of failure one would have to have in order to think that way.

That is the heart of the SJW, which is not only terrified of failure, but is terrified that someone, somewhere, will be successful doing something of which the SJW does not approve.

Of course, SJWs have good reason to be terrified of Alt⭐️Hero. Because they know they are the true villains and the enemy in the cultural war.

Yeah, I guess that makes sense! Surely this will be a bestseller, and we will all cry our sad SJW tears when everyone reads this comic instead of the comics we want them to read.

But what if you are not someone who reads comics, but still wants to thwart all those evil internet people who tell you that you can't use racial slurs anymore? Well, luckily for you, Vox Day has another thing you can give him money for. It is "Voxiversity" -- the online university that will help you in your quest to be shitty to women and minorities.

The launch video for that is very explodey, like an action movie, except instead of "action" it is just some bald dude talking to you about how Twitter is mean to him:

It's like Harvard, but for people who are really boring and don't have much of a personality outside of being a white dude who wants to go around "offending" people all the time.

And this is now your open thread!

Instead of giving your money to a weird sad racist guy to make bad comics, please give some money to Wonkette so we can make good internet postings!