The Week In Garbage Men: Richard Nixon Maybe Not Just A Crook, But Also A Wife Beater 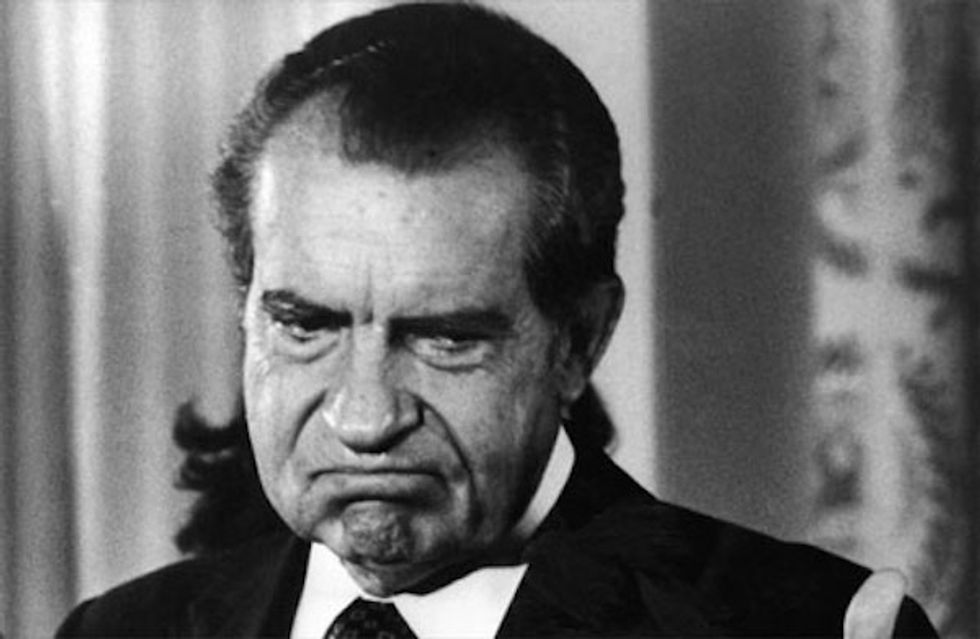 This week, we take a break from the Manosphere to take a look back at a historical piece of garbage, Richard Milhouse Nixon.

A review of veteran reporter Sy Hersh's new memoir in The New Republic has turned up some pretty disturbing information about Nixon. As if everything we already know about Nixon isn't disturbing enough, it seems as though the disgraced former President may have also had a habit of beating his wife.

Almost every person in Hersh’s memoir is a man—a sign of the time and the industry. But there’s an interesting moment that Hersh did not have to include. In 1974, he writes, Hersh heard that Nixon’s wife Pat was in hospital after being punched by her husband. It was not an isolated occasion. He did not report on the story, he told Nieman Foundation fellows in 1998, because it represented “a merging of private life and public life.” Nixon didn’t make policy decisions because of his bad marriage, went the argument. Hersh was “taken aback” by the response from women fellows, who pointed out that he had heard of a crime and not reported it. “All I could say,” Hersh writes, “is that at the time I did not—in my ignorance—view the incident as a crime.”

Hersh, in his memoir, says he now regrets not having reported the incident.

It is to Hersh’s credit that he records many of his own mistakes in his memoir, and this is one subject on which his thinking has fully changed. “I should have reported what I knew at the time or, if my doing so would have compromised a source, have made sure that someone else did.” But if Hersh is “a survivor from the golden age of journalism,” as he opens this book observing, then his oversight in categorizing domestic violence as crime must be recorded as a failing of that age.

You know when women come forward about sexual assaults and other crimes that happened to them thirty years ago, and people say "Huh! Well, why didn't they come out and say something when it happened?" Well, now you have your answer. These things just weren't reported back then. They weren't. Had Hersh reported it at the time, his career likely would have been over, or at the least, he would have been relegated to the National Enquirer. It was just the way things were. And the things were very bad. It's quite likely that, had he reported it, people either wouldn't have believed him or simply would not have cared. If he didn't "view the incident as a crime," it's likely that not too many other people would have either.

The term "domestic violence" wasn't even really invented until 1973. Although "wife beating" was illegal in all states by 1920, it wasn't taken very seriously by anyone until the 1970s and the women's movement. It was simply considered to be a family matter, and not really any of anyone else's business. Hell, until 1993 there were still states where it was legal for a man to rape his wife.

As shitty as things are right now, I guess at the very least we live in a time when there is no question as to whether punching a woman in the face is a crime. Where it would be considered at least a newsworthy thing if the President of the United States did it. Because this isn't just about Pat Nixon, but also about the millions of women, also going through that, who lived in a time where this just wasn't something people talked about, who might not have suffered as long as they did if it had been.