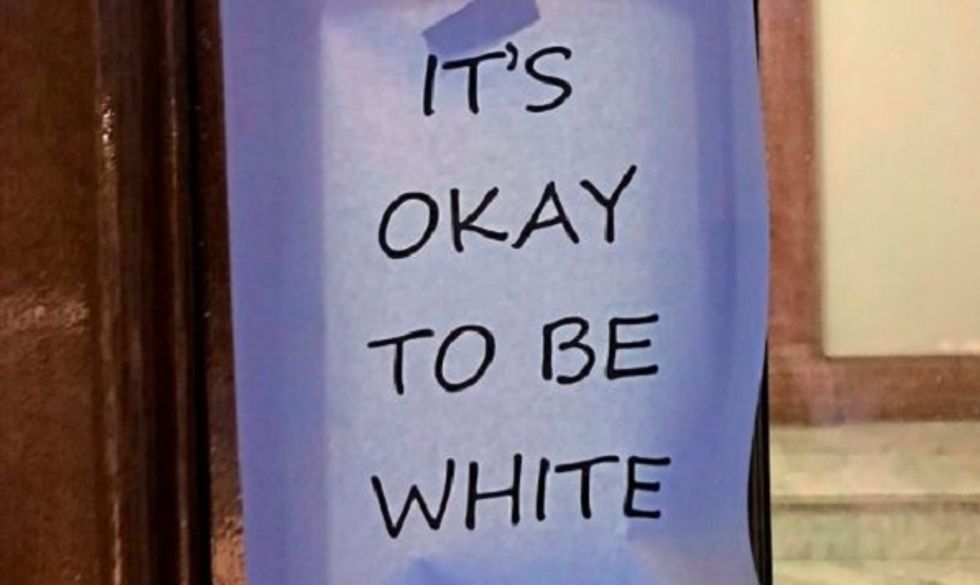 On October 31st, a post went up on 4chan encouraging members to don costumes and sneak out into the dead of night, posting flyers that say "It's OK to be white" at college campuses and all kinds of other places in their respective towns.

2. put on silly halloween costume for anonymity, nobody will think twice because it's halloween

3. posters go up on campuses (and elsewhere) across the world on halloween night

4. the next morning, the media goes completely berserk

5. normies tune in to see what's going on, see the posters saying "it's okay to be white" and the media & leftists frothing at the mouth

6. normies realize that leftists & journalists hate white people, so they turn on them

7. credibility of far left campuses and media gets nuked, massive victory for the right in the culture war, many more /ourguys/ spawned overnight

Very clever! Perhaps next time they will ask us all if we stopped beating our wives?

Shockingly enough, the 4channers actually did get it together to leave their basements and do this, as you may have heard.

Since Tuesday, the posters have been spotted in Rocky River, Ohio; at Concordia College in Moorhead, Minn.; at Tulane University in New Orleans; at Montgomery Blair High School in Silver Spring, Md.; around college-campus rich Cambridge, Mass., including the Harvard Yard and at the University of Alberta in Canada. In most cases, schools and cities have pulled the posters down, but the message has continued to spread in images and hashtags across Twitter and other social media platforms, even prompting a related Know Your Meme entry detailing its Internet origins and cultural backstory.

The hope here, as detailed in the initial 4chan post, is that we will all reveal our secret hatred of white people and then other people will go "Oh man, but I am a white person? WHY DO THEY THINK IT IS NOT OK FOR ME TO HAVE BEEN BORN WHITE??? Obviously anti-racism is code for Project: Make Todd Have Low Self Esteem!"

You know, just like Tucker Carlson is doing in this video here:

According to Carlson, the very fact that people think 4chan's hoax is stupid and racist is proof that the left -- and not the literal Nazis at 4chan -- is causing all the racial division.

The sentiment “it’s okay to be white” is now a hate crime. Ok so what’s the correct position? That it’s not okay to be white? Being white by the way is not something you can control. Like any ethnicity you’re born with it which is why you shouldn’t attack people for it and yet the left does constantly in case you haven’t noticed. So who’s sowing racial division here? They ought to stop. These things never end well.

But what does end well is definitely aligning yourself with a campaign created by white supremacists with the specific goal in mind of creating more white supremacists, as outlined in their plans, which are available for all to see. That is a GREAT IDEA, Tucker Carlson! Truly, you are a uniter of people. And definitely not racist.

Let me be as clear as possible here. It is "okay" to be white. It is not, however, okay to be white and not recognize your privilege and do your part to dismantle it. It is definitely not okay to launch stupid hoax campaigns created for the purpose of turning people into white supremacists. It is not OK to go along with that and pretend like you don't know what it is about, or what the goal there is.

It is also not okay to be Tucker Carlson. That is 100% unacceptable.

The Twitter hashtag itself is filled with people crying about how it's unfair that all the mean leftists are trying to force them to have low-self esteem and posting incredibly racist memes. You would think that people who were so fabulously proud of being, uh, white, wouldn't feel like they need our permission to do that, but apparently they do.

Apparently, they need us all to pat them on the head and say "Hey sport, great job on being born a white person. You did it! Be proud!" or something, or they will never be truly fulfilled in life. Apparently, they need us all to pretend that we don't know exactly what they are doing here, even though they were dumb enough to post their exact plans on a public website.