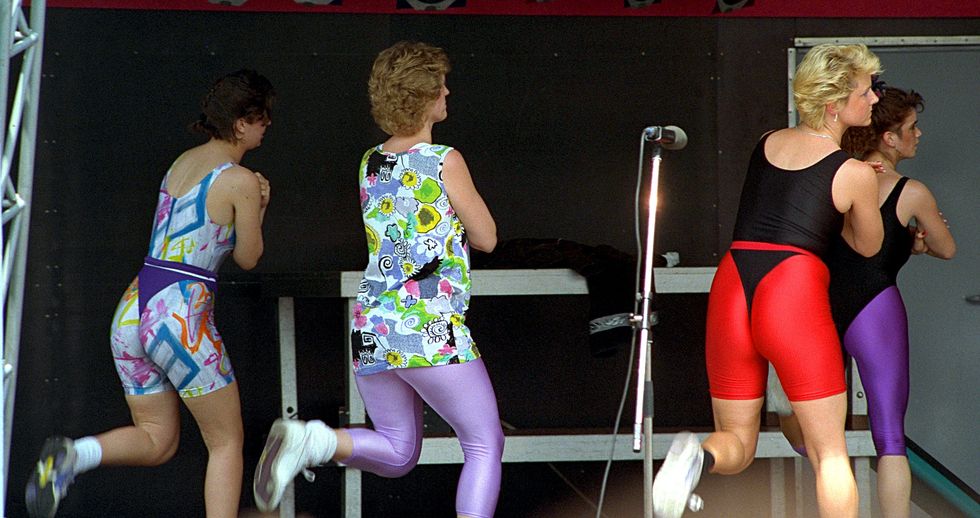 Hello! And welcome to your semi-weekly rundown of what terrible men on the internet are up to these days! This week we shall explore all the ways in which men are being #oppressed.

Lo this past week or so, the incels of Reddit have declared war on leggings. Just to clarify, r/Incel is a subreddit for men who deem themselves "involuntary celibates," and who are very mad at women for not giving them the sex they so richly deserve.

Now, sure. Leggings are a subject of controversy, in general. Some misguided folks are under the impression that leggings are not pants. Which they totally are. They are, in fact, the best pants -- on account of the fact that they can double as pajamas. But the incel war on leggings -- and not just leggings, but also yoga pants, and the concept of women jogging in public -- really takes this debate to a whole new level.

It all started last week when user incellius posted the following screed to the forum, plaintively titled "Why do females jog in public?"

They can run circles in their house. Why do they need to showcase their body to the world? I was minding my own business on the balcony and saw a female jogging in tight leggings and a sports bra. Her tits were bouncing and if that isn't extremely attention seeking then I don't know what is.

Other commenters felt his pain, and decided that this woman must be a terrible person.

Pls, stop. She is an awful person, and thats all. You must be horrible If you enjoy torturing random males in the street, and she does.

Or because she wanted to have sex with "Chad" in the bushes:

They hope to have sex with Chad's on the bushes or street. But hope to not do the same with an incel.

Chad Thundercock, as you may know, is the enemy of all incels. He is a perfect Alpha Male with a square jaw, and he is a sex machine to all the chicks. According to incel theory, which is insane, women only want to have sex with Chad. Sometimes, after they "hit the wall" (ie: are over 25) and have already sexed up a million Chads, they will settle down with a "Norman"(normie), for the money (a theory they call "Alpha Fucks, Beta Bucks"), but still want to fuck Chad and will do so if the opportunity is available.

In case you were not 100% sure of how bonkers these fellas are, the same guy that declared the jogger an awful person is sad that he cannot join ISIS, for dating purposes:

I wish i could have the courage to join ISIS... They would give me a wife, more that i could have ever achived (sic) during my whole life.

Several days later, yet another incel was oppressed by leggings at his doctor's office:

In a charming post titled "Femoid showing off her ass in thin leggings blocked her ass from my view" ThrowawayAwkwardguy4 writes:

I was going to my doctors for a routine blood test (taking thyroid replacement) the femoid working at the front, lead me to his office. She was wearing grey leggings totally revealing her ass curves with a damn wedgie. As I followed her she put her hands behind her ass and locked fingers to cover her ass as she walked me to the room

Like no, I am not allowed to look at her ass that she's showing off to attractive guys. Despite the fact she had the pants up her ass. Femoid be like "Omg my ass is in view of this loser!! Must block his view!"

If it was chad she would have stuck her ass out further and "accidentally" dropped her pen to bend over.

What's the point anyway? When I was actually having a half decent morning in an OK mood She just had to remind me I'm a reject and god forbid a beta sees her ass.

UNFAIR! How dare a woman notice that a weirdo is leering at her ass and then attempt to stop him from doing so! What cruelty!

Other incels had similar experiences:

Yea this happened to me. A femail wore very small clothes with skin exposed and I sat behind her in class and she covered herself for the whole two hours of lecture. It looked uncomfortable for her. But anything to not let a non male model see it, right?

I saw a slut walking down the street wearing a skirt that couldn't even cover her ass.. until she walked past me.

Then she HELD IT DOWN AS HARD AS SHE COULD AND PUT HER PURSE THERE.

This is, for real, the weirdest kind of entitlement in all the land.

I went out today as usual for my early morning jog. Everything was okay for the first few minutes or so, but my mood was completely ruined when I saw a group of femoids jogging in front of me - wearing their tight and somewhat transparent yoga pants -- as if they were trying to lure the orbiters towards them. It fucking pissed me off. These bitches were not really jogging or trying to be fit -- they were just putting a charade to show themselves off to all the sexualy frustrated men like me. Fucking degenerates with their slut pants then have the audacity to scream shit like, "don't sexually objectify me!!!!", " women's are not sexual objects!!!". You know what I have to say to that? Go fuck yourself. No one gives a shit if you were sexually objectified. No one gives a shit if you were sexually assaulted. Because you idiots deserve it for wearing slutty clothes like that in public trying to gain attention from impressionable men.

Yeah! Those women are not actually trying to jog, they are just trying to give incels blue balls, If they really cared about their feelings, they would either sleep with them or refuse to leave the house. Obviously.

In other news, one Meninist named Bruce Walker took some time on Friday to write an article for the American Thinker praising Betsy DeVos for taking such a brave stand for Men's Rights and the "rights" of sexual assailants last week, and explaining that feminism has always been a lie and men have always been more oppressed than women:

The feminist jihad against men started fifty years ago with the bald-faced lie that the "system" had been constructed solely by men for the benefit of men.

Oh really? Do go on!

Consider the inability of women in some states to enter into contracts in the 19th century. In fact, this was a protection for women denied men. Women could enter into contracts, but unlike men, women were immune from being sued for breaches. Men had to carry the burden of litigation and financial responsibility, and women were exempt from that burden.

Now, you'd think that -- given how unfair Walker is claiming things used to be for men, before feminism, that he'd be way into feminism. He is not.

It is high time for courageous conservatives like Betsy DeVos to take up the cause of men in America, who, unlike women a century ago, do not have some rights that the other sex does not, but rather are in every sense and in every way a maltreated, mocked, and abused minority in our land. Men's rights ought to be the clarion call of everyone truly interested in civil rights. But the left could not care less about civil rights for all Americans. The left cares only about power.

This is really one of the more curious things about the Right. They want to be oppressed so goddamned badly. Not actually oppressed, mind you. But they want the experience of having the Left come to their defense in this way. On some level, they feel like it only counts if the Left does it, probably because they want to equate their "struggle" with the struggles of legitimately oppressed people.

How else are men being oppressed this week? By not letting a convicted rapist play football, of course!

A judge has decreed that Ma'lik Richmond, who you may remember as one of the Steubenville rapists (the one whose dad died recently while trying to shoot a judge), will temporarily be able to play football for Youngstown State.

The school had first allowed him to play as a walk-on, and then told him that he would not be playing this season, after students filed a petition to keep him off the team. You know, because he's a rapist. So he filed a federal lawsuit.

One of Richmond's attorneys, Susan Stone, said in the lawsuit that the university had become infected with an anti-male bias due to Richmond's rape conviction.

Stone argued Thursday that the university was contractually obliged to allow Richmond to play so long as he followed university rules. She said the university hurt Richmond's football career prospects by curtailing his exposure to professional scouts at the peak of his abilities, and that the restraining order was necessary to prevent Richmond from losing any more playing time.

"This is his time to shine," Stone said. "Every opportunity to play is crucial."

Gee! I'm not sure that's so much an anti-male bias as it is an anti-rapist bias. It doesn't seem as though they are keeping any other men off the team, just the one that is a convicted rapist. Also, fuck his football career and any professional scouts that would recruit him, and any major football team that would hire him to play for them.

I am sure that men have been oppressed in myriad other ways this week, but we just don't have time for that shit right now. So go put on your sexxiest leggings and go for a jog, specifically to upset some incels.

And then maybe donate some money to Wonkette so we can keep ourselves in fresh supply?