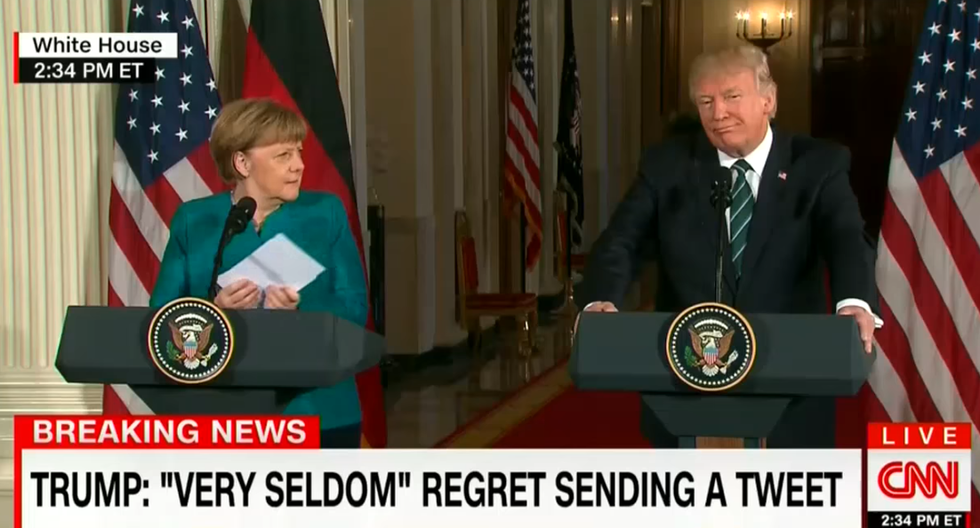 As you know, Angela Merkel, the leader of the free world, is in America this week, because even she knows you have to meet with common tinpot wannabe dictators like Donald Trump sometimes. American leaders did the same for decades before November 8, 2016, when things, ya know, changed.

During their very awkward press conference Friday afternoon, a reporter tried to ask Trump about his lying bullshit about Barack Obama doing a "wire tapp" to him, and as he doubled down and petulantly refused to admit that he's a bad stupid person who is stupid and bad, and also lies a lot, he tried ("tried") to add some levity to the situation by referring to the Obama administration and, motioning to Merkel, said, "at least we have something in common, perhaps." GET IT? OBAMA DID A "WIRE TAPP" TO HER TOO! LOL! FUNNY! WE ARE SORRY BUT ANGELA MERKEL DOES NOT GET YOUR "JOKES," DONALD TRUMP, AS THEY ARE NOT GROUNDED IN ANY SORT OF TANGIBLE REALITY!

Merkel's body language in this video is everything. It will renew your spirit. You will laugh your gonads off. Then you will experience a moment of bittersweet sadness, as you realize that you are literally LOLing at the German chancellor humiliating the American president. But then you will start laughing again and it'll all be OK:

Did you catch that? Here, watch it from this angle, with the close-up on Merkel's face from the side: