Then They Came For The Trade Unionists And It Was Time To Step The F*ck Up (Again!) 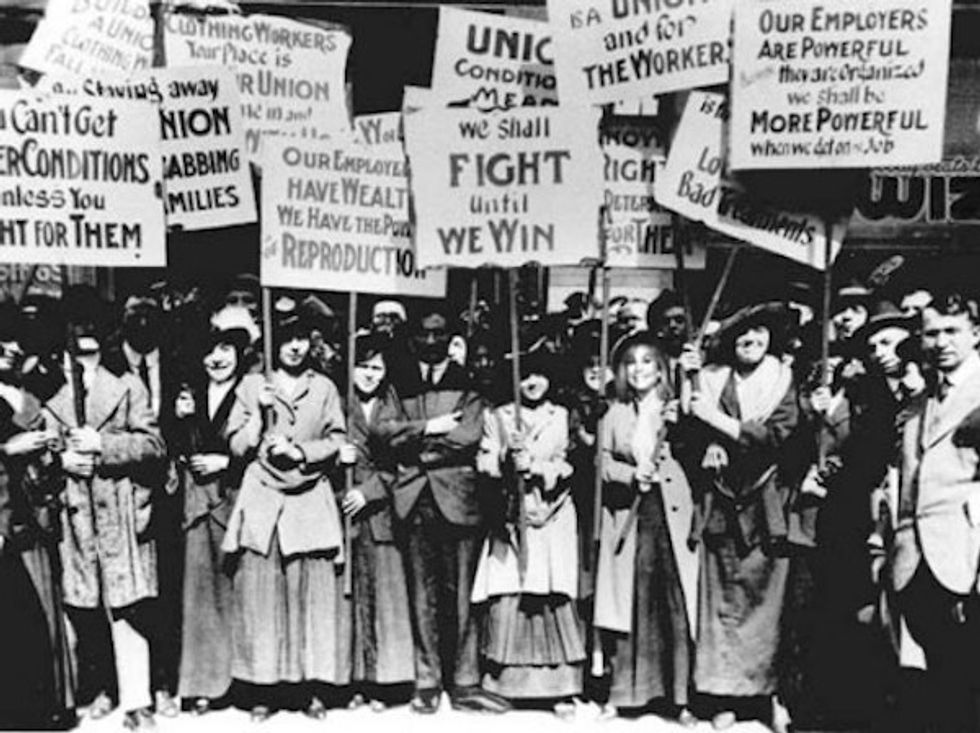 The 1912 Strike for Bread and Roses

Among the many, many, many disturbing things that occurred yesterday, Wednesday, February 1, 2017, was the submission, by House Republicans Steve King and Joe Wilson, of a "National Right To Work Bill."

Given the fact that Donald Trump has already said that this is a thing he supports, it is very likely to pass. And that is an extremely bad thing. It is a very, very, very, very, very bad thing. For all of us, not just those of us in unions. It is possibly the most insidious thing they are doing right now, and we need to be paying attention to it.

Proponents of Right to Work (RTW) laws insist that they are merely advocating for FREEDOM. Freedom to belong to a union, or not belong to a union. Freedom to pay union dues, or to not pay union dues. But what these laws do is cripple the power of unions and lessen their ability to effectively bargain for higher wages and better working conditions. To boot, they also create a class of "free riders" -- because although people can choose not to join a union and pay dues, the union still has to represent them and their interests -- and thus, a declining ability to effectively advocate for workers.

This is, as you might imagine, not at all about "freedom" for workers. It is about decimating unions -- which Republicans see as a threat to their political power, on account of the fact that they traditionally back Democratic candidates, and it is about company owners getting to pay their workers less. And less, and less, and less as time goes on.

If we want fair wages, if we want equal pay, if we want maternity/paternity leave, if we want safe workplaces, the only way we are getting those things for quite some time is through unions and collective bargaining. Rather than letting unions deteriorate, we need more unionization, and we need those unions to fight for those things, and make them so normal that non-unionized companies have to play along or lose out on qualified labor. We need unions now more than ever.

There are a lot of people out there who voted for Trump on account of the fact that he said he'd bring manufacturing jobs back, assuming that those jobs would pay like they did before NAFTA. This will ensure that even if they do, by some miracle, come back, they will not be doing that. If you think companies are going to go from paying sweatshop wages to paying you a living wage out of the goodness of their hearts without pressure from a union, you are an idiot. Manufacturing jobs did not always pay well -- people had to fucking fight and die for them to pay well.

This legislation will be a major hit to the black community, in particular. Black workers -- specifically black female workers -- are more likely to be represented by a union than any other demographic. Union membership provides a buffer to wage discrimination based on race and sex, resulting in those who belong to unions making higher wages and receiving better benefits than their non-union peers.

Black union workers in low-wage occupations have wages that are 18.9 percent higher than their non-union counterparts.

Unionization rates for Black workers have declined across all sectors, but the decline has been especially steep for manufacturing (from 42.3 percent in 1983 to 13.3 percent in 2015).

Economic justice is also social justice. There is a reason so many of our most admired and fiercest advocates for social change were union organizers. Elizabeth Gurley Flynn, A. Philip Randolph, Dolores Huerta, Lucy Parsons, Cesar Chavez all came from labor. Martin Luther King was assassinated while helping to organize a sanitation worker's strike in Memphis. It is a way to fight for social change without the permission of the government, which is why Republicans hate it.

If one single factor is to blame the most for the extreme, unequal distribution of wealth in this country, it is the decline of unions. If all those "white working class Trump supporters" want to know why they are "poor" -- it is the decline of unions. Not only did unions raise wages for their workers, they increased wages across the board -- because non-union companies had to compete with union wages. This is still true today. Workers in Right To Work states make an average of $6,109 less a year than states that don't have "Right To Work" on the books.

Unions have been steadily losing power since the 1980s, when Ronald Reagan broke the air traffic controllers strike, setting a dangerous precedent. To summarize, the union went on strike, and instead of negotiating with them, Reagan just fired them all and hired new people for less money, and then also banned all those who struck from ever having a federal job again -- a ban later lifted by President Clinton. Prior to that, this was an unthinkable thing to do. Reagan made it thinkable.

In addition to that (and, admittedly, several public scandals involving corrupt union bosses), Republicans further pushed an anti-union agenda by aggressively pushing the idea that unions were essentially anti-American. Real Americans wanted to negotiate their salaries for themselves! Because why should they make the same amount of money as someone who wasn't as good as them?

And won't someone please think of the poor job creators? Who won't be able to create jobs and profit from them if you don't let them pay people next to nothing to do them?

Convincing Americans that their fellow Americans are all just lazy fucks who just want to mooch off of their hard work is one of the greatest tricks the GOP ever pulled. Keeping poor people more resentful of other poor people than they are of the rich is a great way to keep those people poor.

Americans, by and large, have bought this line of thinking. They have drifted away from embracing labor rights and unions the way they used to, and no longer bother looking for the union label. Union membership is constantly decreasing, and I regularly hear people brag about working 60+ hours a week, never taking actual lunch breaks, etc. etc. Millennials, in particular, so fear the "entitled" label thrust upon them, that they feel the need to work more than they are paid for, and constantly disparage other millennials as the "entitled" ones that they are different from.

Last year, a woman who worked for Yelp's Eat24 service wrote an open letter complaining to the CEO about how little she was paid, and was subsequently roasted by the internet for being so entitled as to think she ought to be able to buy groceries on her salary. And then was fired by Yelp. Ugh! Can you even believe it? How tacky! And why is she living in San Francisco if she doesn't have money (never mind the fact that in order to operate in San Francisco, Eat24 does require employees that live there)! She should be grateful she even has a job!

Thinking about this behavior as some kind of unprecedented "everyone deserves a trophy" entitlement is part of the scam. You see, many years ago, people regularly fought for higher wages. They even died for them. They died for the weekend, for the 40 hour work week, for lunch breaks -- and they died for unions.

Back in 1912, workers in a textile mill in Lawrence, Massachusetts, launched what is popularly known as the "Strike for Bread and Roses," due to the fact that their pay was cut when a new law shortened the work week. A strike led by poor, immigrant women and children. One woman, Anna LoPizzo, was shot and killed by police during the strike. But they fought, and they won.

The term "Bread and Roses" comes from a speech by socialist and feminist Rose Schneiderman, in which she said that "The worker must have bread, but she must have roses, too." Meaning that not only must people be paid enough to eat, but also to enjoy their lives. Were someone to say that now, they would certainly be called "entitled."

They are coming for the trade unionists, and -- this time -- we had better speak the fuck up.