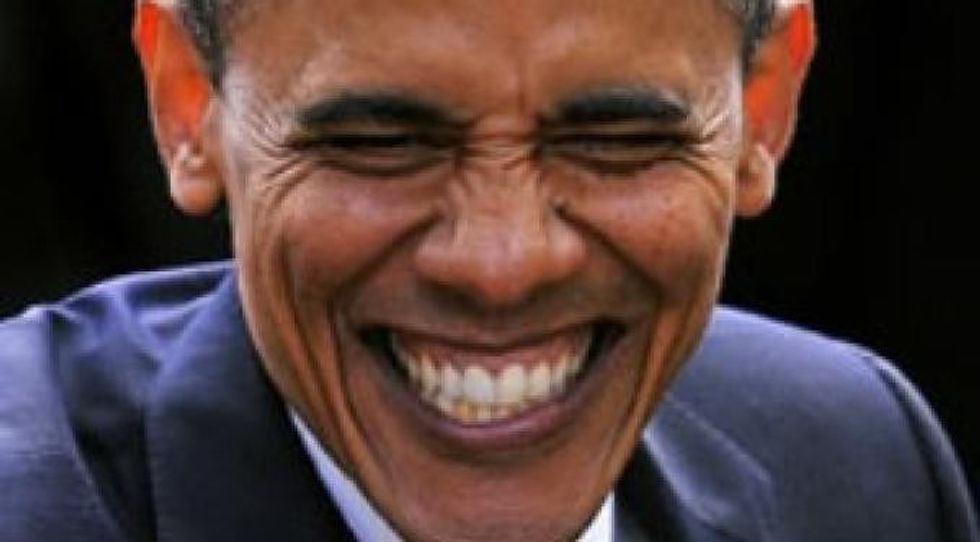 One of the sweetest things in the world of 2016 is when our president, Barry Bamz Obama III, decides to open his mouth and say words about that idiot Donald Trump, who for some reason thinks he has big enough hands to be leader of the free world. This time, it's in an interview with Bloomberg Businessweek, and it's extra sweet, because Obama The Community Organizer is kicking Trump right where it hurts: Trump's skills as a businessman.

The very stupid question from the interviewer:

Does it annoy you ... that the guy who wants to go back [to the "good old days," when things weren't actually that great] and is America’s most successful businessman, at least by his own reckoning, is Donald Trump?

Oh, interviewer. You qualified it with "at least by his own reckoning," but the question had already gone to hell at that point. Good try, though.

Obama fixed it with his answer:

[wonkbar]<a href="http://wonkette.com/603228/hillary-clinton-cant-stop-laffing-at-piss-poor-businessman-donald-trump"></a>[/wonkbar]And in a way, that's very true! Oh, Trump has a lot of money (maybe ... but not in his campaign war chest LOL), but as Hillary Clinton and Elizabeth Warren have been explaining, his only business model is to drive shit into the ground, declare bankruptcy, and then just run away with whatever dollars he can stuff up under his armpits. Oh, and then there's that scammy Trump University. That was a smashing success.

But when it comes to innovation, building businesses that are beloved by Americans (and even foreigns!) and benefit many more people than just the CEO and shareholders, Donald Trump comes up flaccid. Just before the Trump question, the prez and the interviewer were talking about things like Bill Gates, American innovation, global entrepreneurship, mapping the human genome --- big, tremendous, inspiring stuff! (YOOGE.) And sadly, it's all stuff that's way out of Trump's league. Sorry, little guy!

[wonkbar]<a href="http://wonkette.com/600427/heres-your-sexxxy-president-barack-obama-calling-donald-trump-a-dumbass"></a>[/wonkbar]The rest of the Bloomberg Businessweek interview is a great read, if you like wonky, smart discussions about business, the economy, and Jamie Dimon. It actually delves deeply into the question of, if Republicans whine and bitch so much about Obama being "anti-business," then why are Wall Street and the economy doing so much better than they were when he came into office? (Funny how that worked, right?)

If you don't want to read all that, you can be like "TL;DR" and rest easy in the knowledge that Barry O'Sexy still thinks Donald J. Trump is a joke and a dumbass.