These Candy Corn Jell-o Shots Will Feed Your Sweet Tooth, With Booze 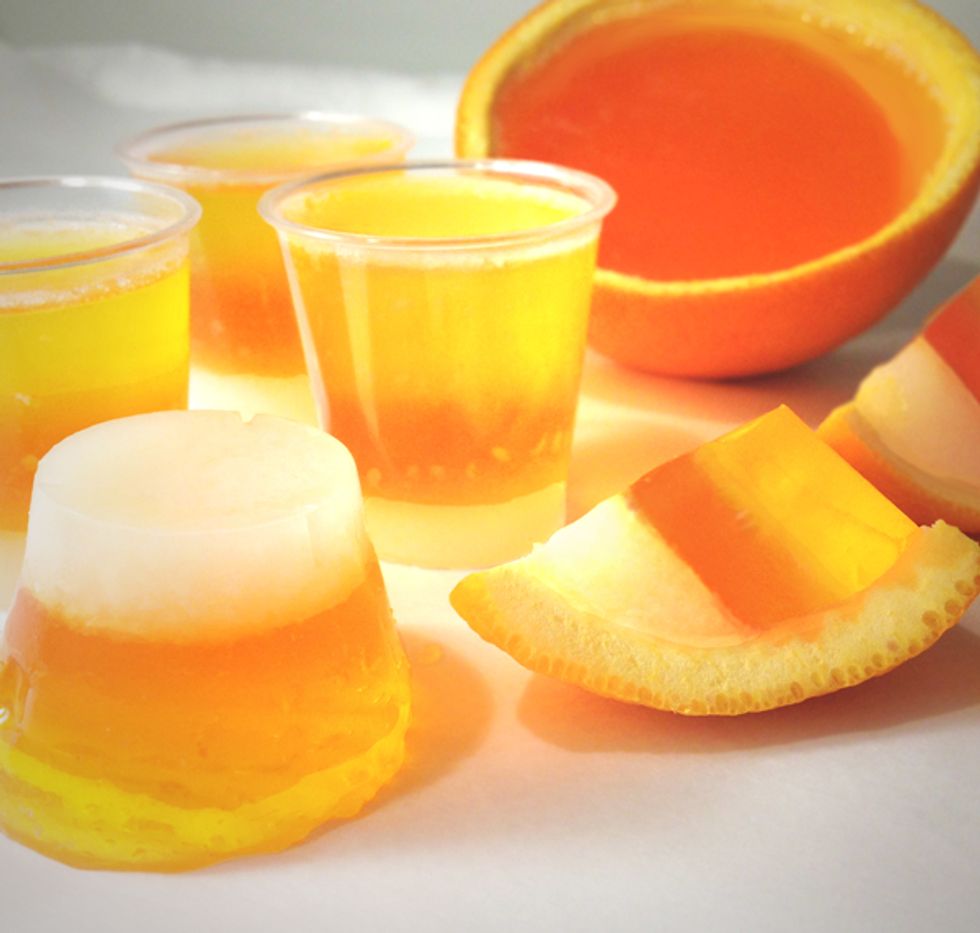 We are eating Candy Corn Jell-O Shots for Halloween. Coconut, orange, and pineapple gelatin with vodka -- party in the test kitchen!

The best part about this recipe is that is doesn’t taste like a Candy Corn at all. Remember nibbling off the white tip, biting into orange, and feeling totally ripped off by the time you ate the yellow part? The whole niblet tasted the same. Imagine a Halloween candy with integrity, in a world where vivid color aligns with juicy expectations (plus vodka). Pile on with creepy gelatin -- a nervous food that is still moving while you eat it.

Gelatin shots take minutes to prepare, but need to chill in the refrigerator for several hours (or overnight). Keep the vodka cold before using it. Try vanilla or whipped cream flavors.

Things you will need to mold the gelatin:

3 envelopes of Knox gelatin (¼ oz. each), unflavored and unsweetened

¾ c. cream of coconut, skim off the cream layer and discard

In a saucepan, sprinkle the gelatin over the coconut cream, coconut water and dairy. Do not stir -- give it two minutes to bloom. Over medium heat, stir the pan and simmer. When it comes to a boil, reduce the heat and continue stirring for about two or three minutes more. Remove from heat, stir in the vodka and pour some into your prepared molds. Set these in the refrigerator for about an hour.

You can substitute the cream of coconut and dairy products with canned, unsweetened coconut milk. Add about two or three tablespoons of sugar while it simmers.

In a 2-cup glass measuring cup, boil the water in the nuker. Stir in the gelatin until it is completely dissolved (about one full minute). Add the vodka, and pour this over the coconut layer into your molds, leaving enough room at the top for the final layer. Let this chill for an additional hour.

Same prep as the orange layer. Top off the molds with pineapple and let this set for four-eight hours. I don’t recall having the patience to wait for Jell-O shots to set in college. Maybe you will!

Shots can be removed from the plastic cups by sliding a knife around the edges. Slice the oranges into wedges and serve. Yes, this will hurt tomorrow, but only if you had as many Jell-O shots as you wanted. Enjoy!