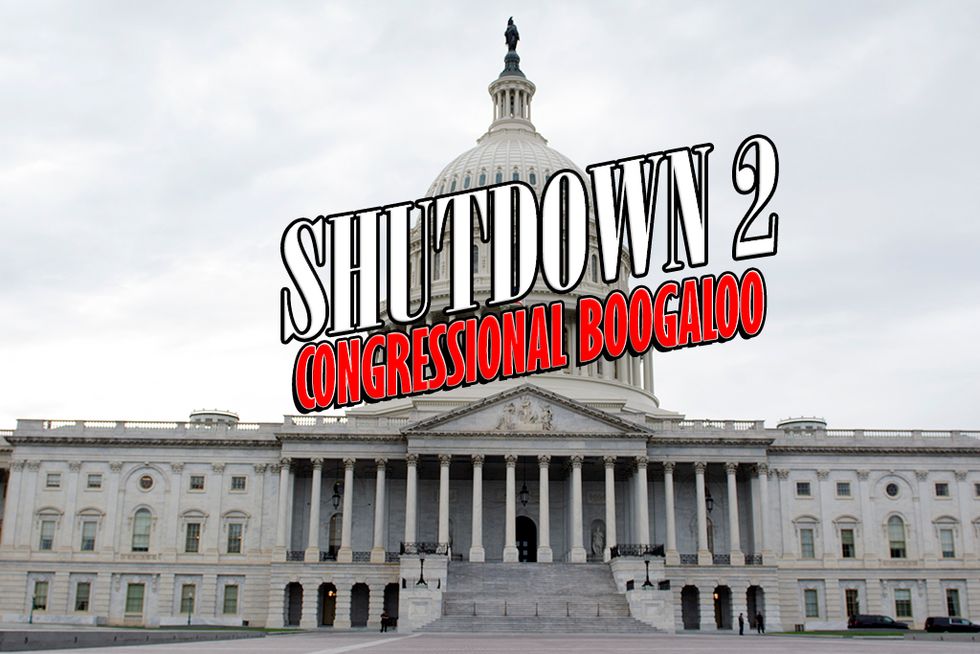 Morning Wonketariat! Here's some of the things we may be talking about today, none of which involve Omarosa.

After Sen. Rand Paul held the entire government hostage just to be an obnoxious showboating asshole, the Senate passed a government funding bill shortly after 2 a.m. A few hours later, it landed on the House floor where Paul Ryan then spent the early morning hours lazily jerking off and whining. Shortly before 9 a.m., somebody interrupted Fox and Friends so Trump could sign the bill.

Tucked inside of the 650-page budget deal was a kickback for small Kentucky colleges courtesy of Mitch McConnell.

Democrats were able to sneak in some of their Better Deal proposal that helps poors living in fly-over country, including funding for Child Care Development Block Grants, infrastructure spending, funding for rural broadband, and a commitment to fulfill pension obligations.

While investigating Trump-Russia, there's a chance that the FBI overheard Steve Bannon telling Carter Page not to go on MSNBC and dig his own grave. LOL, if true!

Chuck Grassley is in no rush to release DJTJ's Trump-Russia testimony, and is reminding reporters that a "lack of evidence" (read: pee-hooker tape) leaves the story very one-sided.

Like a frat-bro with a dad who owns a used car dealership, DJTJ has been mouthing off on Twitter, saying that Trump-Russia is like the authoritarian stuff that happens in banana republics...

Peggy Noonan's column this week is a bigger mess than usual, full of half-baked drunken musings about the "Reagan wars." Go home, Peggy, you're drunk. [Archive]

Virginia Democratic Sen. Tim Kaine is demanding the release of a secret memo that outlines the rationale for Trump to start a war; apparently none of them know how to (legally) drag the US into another poll-boosting international conflict.

House Democrats are begging for the Judiciary Committee to hold "immediate hearings" on election security and Russian fuckery after Trump's White House and congressional Republicans shrugged it all off.

John Kelly ALLEGEDLY knew the FBI didn't think Rob Porter should hold secret stuff, and actually gave him more responsibilities. But it gets better as White House counsel Don McGahn knew of Porter's past for a year, and kept him around because he wasn't a complete idiot.

Corey Lewandowski is the person who got Rob Porter quit-fired after he started looking into who was currently fucking his ex-girlfriend, Hope Hicks. At least, that's what Ivanka says, we guess.

Trump's White House is in damage control (as usual) and sending out lawyers to say that it's not a big deal if dozens of White House employees lack an actual security clearance.

A bunch of teachers went to the Department of Education to give Betsy DeVos "report cards" with failing grades. A DeVos spox bitched about them shooting their own video footage, and defending LGBQT students, public school funding, campus sexual assault policies, and college students with obscene student loan debt. The nerve!

Failing coal plants are looking for a bailout, so they're lobbying Rick Perry to beg Trump to save them from their inevitable demise.

Two more senior FBI officials have been quit-fired/retired after Republicans started bitching about their incompetence while looking at Her Emails.

The Trump taxes have been great for big businesses like AT&T and Walmart who are only raising wages to write off all that lost revenue on their taxes.

Texas Republicans are eating each other alive as they race to the right, naturally the local Democrats are just letting them.

A pro-Israel charity is holding its fundraiser at Mar-a-Lago saying out loud they're hoping "that the president might also come to say hello and offer greetings."

Puerto Rico asked Congress for $94 billion to rebuild its infrastructure, but it only got $17 billion as congressional Republicans felt it was more important to lower the price of orange juice.

The House Oversight Committee will investigate how convicted pervert and pedophile Larry Nassar was able to molest hundreds of women while employed by the USA Gymnastics.

Cristina Garcia, one of the leaders of the #MeToo movement, is being investigated for sexual harassment after several men came forward to accuse her playing grab-ass while drunk.

Twitter didn't bother to remove hundreds of Russian propaganda videos on the micro-video site Vine until CNN started being annoying and asking questions.

NASA is confirming that a lost satallite has been found and they're in the process of getting it working again after it was found by an amatuer skywatcher.

We are 100% reader funded and ad-free, that means we need your money to keep the lights on and the coffee flowing!