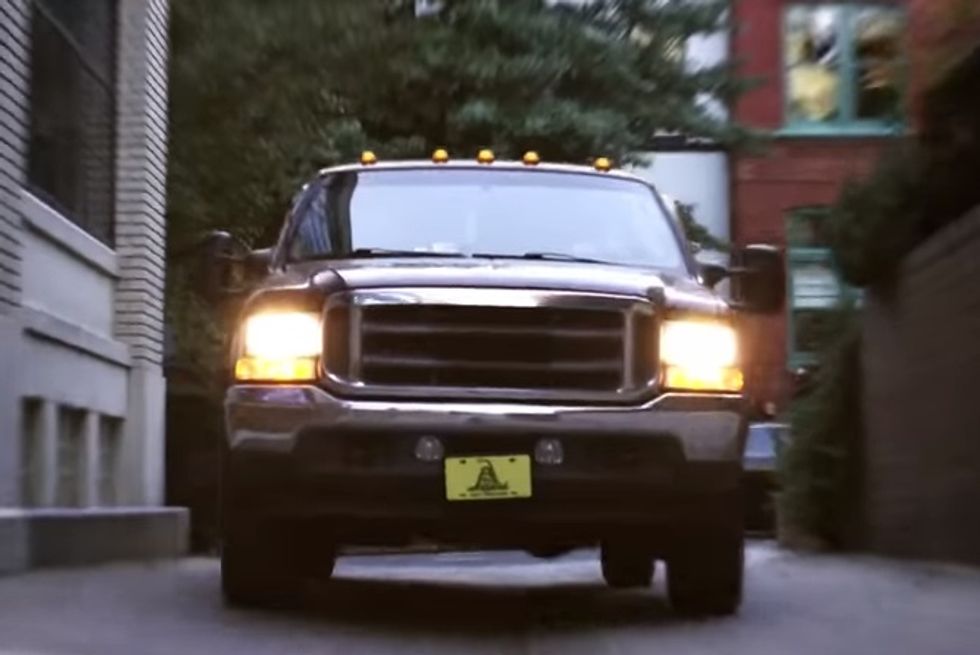 The Virginia governor's race has gotten super ugly, with Republican Ed Gillespie's campaign churning out fearmongering ads about MS-13 coming to kill you if you vote for Democrat Ralph Northam, and promising that Gillespie -- a true son of the South who hails from New Jersey -- will save all the precious Confederate statues from being murdered by Democrats and MS-13. Another ad preposterously suggested that Northam wants convicted pedophiles to have guns. Northam, mindful of how John Kerry took too long to reply to the "swiftboat" ads, fired back with one of his own, calling Gillespie's fearmongering "despicable," but the hell of it is that negative ads often work, and Gillespie is getting a bit closer to Northam in pre-election polling (not that anyone can make sense of the polling in Virginia, but that's another matter).

All of which is by way of saying that for once, a Democratic-aligned outside group, the Latino Victory Fund, has released a scare-you-to-the-polls commercial that made us gasp (and stopped your Editrix's heart). Titled "American Nightmare," the ad shows a big black pickup with a Gillespie bumper sticker, a Confederate flag, and a "Don't Tread On Me" front license plate chasing after a bunch of terrified minority kids like the demonic old tanker truck in Duel. It ends with the truck cornering the kids in an alley -- and then we see each of the little kids waking up from the nightmare, scared but safe at home. Or are they? The ad ends with parents watching TV footage of Nazis in Charlottesville marching by tiki torch, as a voiceover asks ominously, "Is this what Donald Trump and Ed Gillespie mean by the American Dream?"

This thing is scary effective. Before you watch it, we hope you've got your shittin' pants on:

The group pulled the ad, which had been airing in the Richmond and DC markets, last night after the terror attack using a pickup in Manhattan, which some people think was the right thing to do, but on its own, we think it's a hell of a good ad. The ad had earlier been condemned by the Gillespie campaign as unfair, but Latino Victory Fund President Cristóbal J. Alex wasn't about to apologize for the imagery:

We knew our ad would ruffle feathers. We held a mirror up to the Republican Party and they don’t like what they see [...] Gillespie brought this on with his relentless attacks on our community. This is a direct response.

While Northam's campaign wasn't involved in the making or distribution of the ad, Northam also declined to condemn it, either, saying Monday that Gillespie's own ads

“have promoted fearmongering, hatred, bigotry, racial divisiveness.” He added that “it’s upset a lot of communities, and they have the right to express their views as well.”

Not surprisingly, Trumpers and Gillespie supporters are hurt and saddened by the ad, because they are always the real victims, the poor dears, always being picked on by white-hating minorities and liberal elitists:

“Ralph Northam doesn’t just disagree with millions of Virginians who don’t share his liberal policy agenda,” Gillespie said during a segment on “Fox and Friends” yesterday morning that focused on the ad. “He disdains us.”

The Latino Victory Fund has also pulled the ad from its YouTube channel, but it was reloaded on a channel run by TownHall, where the butthurt was palpable. See the palpable butthurt:

We were particularly charmed by "I want to execute (publicly) anyone who was involved in this ad," because nothing dispels the negative image of rightwing whites as portrayed in the kid's nightmare like a Trump supporter explaining he wants to kill people he disagrees with.

Yr Wonkette is 100% supported by reader contributions. Help us keep OUR shittin' pants on with a donation! CLICK HERE!