This Holiday, Start Your Own Eggnog Riot With Our Handy Recipe! 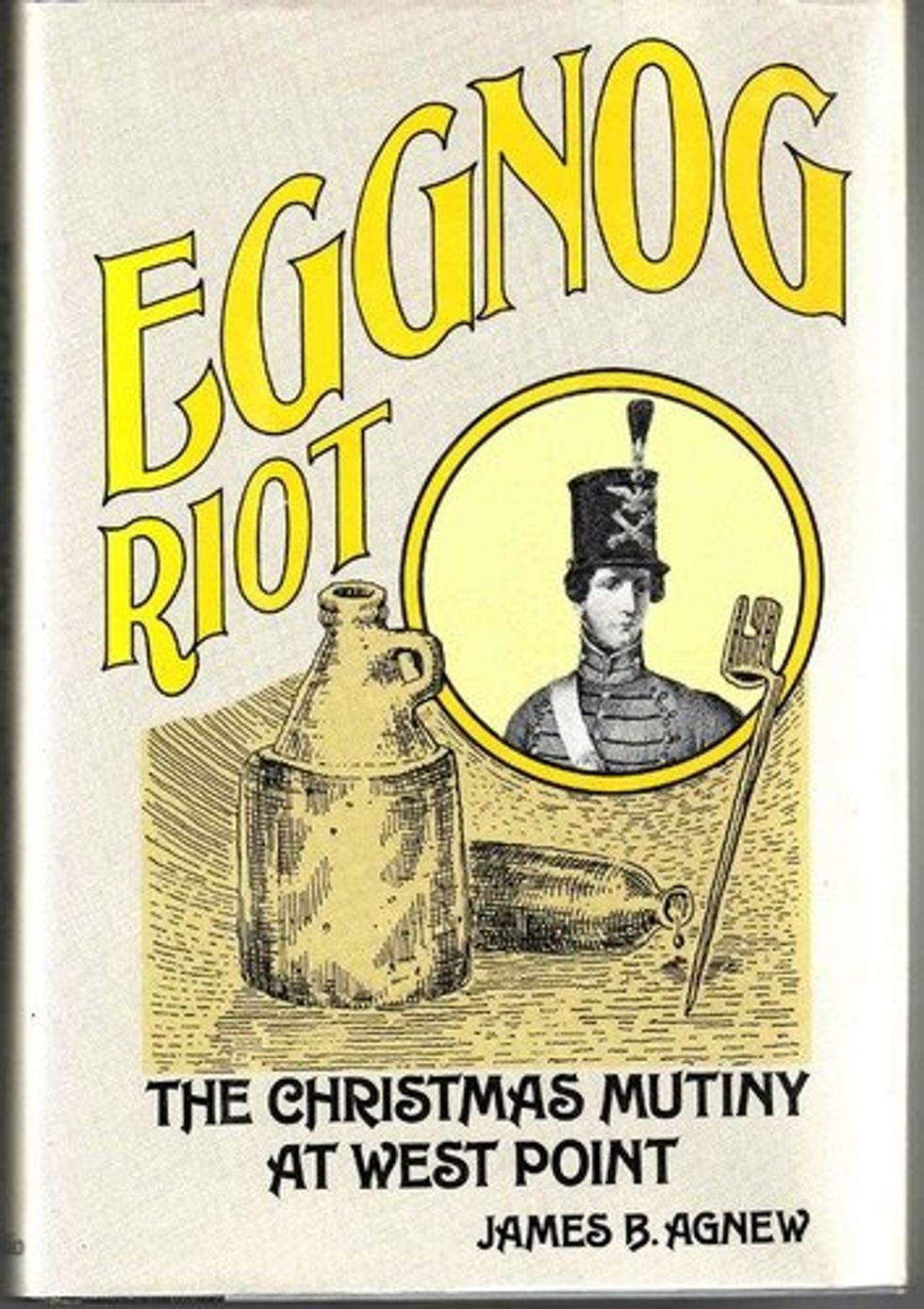 You probably can't quite get yourself worked up enough over the new Air Jordans to join the bloodthirsty mobs across the nation tearing each other's limbs off under rainstorms of police pepper-spray in order to get hold of some ugly sneakers down at the mall, because that is awful. But did you know that Americans used to hold holiday riots over much more fun things, like eggnog? It's true! In 1826, a group of mischievous West Point cadets smuggled many, many gallons of whiskey into the Academy to make a nice boozed-up eggnog for the Christmas party, just like George Washington also used to love for celebrating the baby Jeebus. As a result of getting wasted, on eggnog, they lost their minds and mutinied like hell for TWO STRAIGHT DAYS. Sounds more fun than bleeding to death out your ears on the floor of the mall, right? So here is a recipe for you to get the ball rolling on your very own commemorative Eggnog Riot:

Get together a dozen super fresh eggs (because you are eating these RAW, remember?), 1.5 cups granulated sugar, 6 cups milk, 4 cups heavy cream, a few big teaspoonfuls of grated nutmeg, and of course, booze. Rum, brandy, rye whiskey or any of the liquors popular with movie pirates, or bourbon, will all work. Tequila is an example of a liquor that will not work unless you are making the Mexican version of eggnog, a "margarita."

Separate the eggs. Have you seriously never done this before? Okay fine, we have taken the three seconds you would have needed to find an instructional video from the nineties that LUCKILY FOR YOU has made its way onto YouTube. Set aside the egg whites and do not throw them away.

Put the egg yolks into a large bowl -- a mixing bowl, not just the biggest cereal bowl you have, and then dig out the electric mixer you haven't touched since you bought it at a garage sale last summer because you figured it would inspire you to cook home meals more often. Mix on a low setting for a few minutes until the yolks' color lightens up and stops taking everything so seriously.

Continue mixing on a low setting as you gradually add in the sugar. Once that makes a nice, even goo, you can add in the milk, the cream and the nutmeg. Mmmmm, CALORIES. We should have mentioned at the outset that you probably will not want to eat anything else for the rest of the day, but that's okay since Aunt Gert tired herself out and just decided to serve one of those rubbery microwaveable precooked hams that was on sale at Sam's Club for dinner this year.

Now the fun part: the booze! This is the CHOOSE YOUR OWN ADVENTURE part of the recipe: you can use anywhere from two cups of liquor to give the nog a wimpy little nip, or you can go the full George Washington and save freedom by throwing in up to a quarter-gallon of alcohol, like he used to. If you're combining various types of liquors, mix them together first before slowly adding them to the egg yolk-dairy mixture. Keep stirring for a minute or two after you've got all the booze in, because why not.

ALMOST THERE. Rinse off the electric beaters (UNPLUG THE DAMN THING FIRST), and then figure out where you left the egg whites, hopefully in a bowl and not in, say, your pants pocket. Beat the egg whites with the mixer on a high setting for 4-5 minutes until they fluff the hell up. They need to form a thick foam that holds a little bit of a shape. Maybe yell at them, to be encouraging. Then dump the foam into the booze-milk bowl and mix it up! TA-DA.

Let this sit covered in the fridge if you can put off your riot for one more hour.