This Is Just Getting Ridiculous: Obamacare-Hatin' Sheriff Ups His (Not-Begging) Ask To A Cool $60 Grand 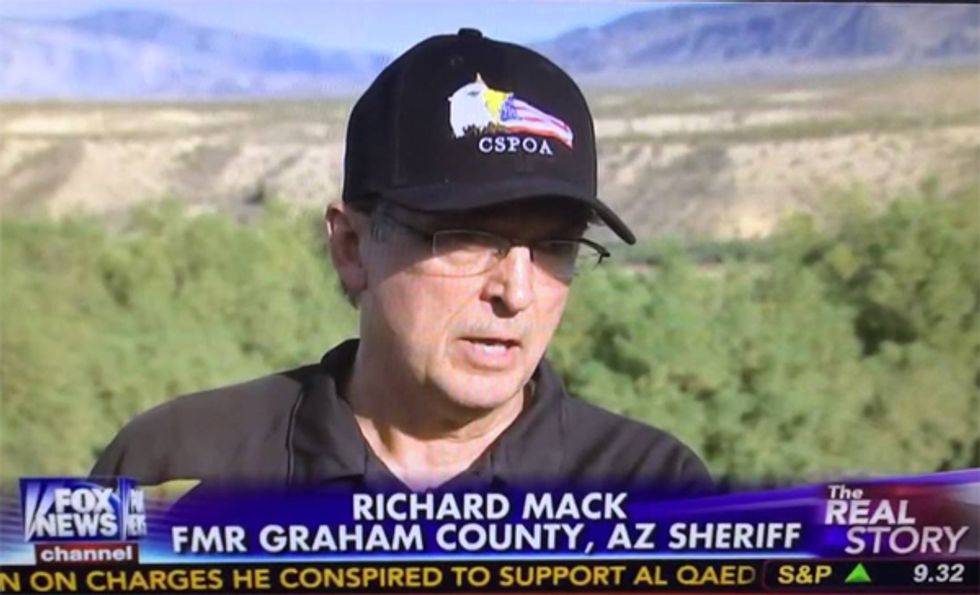 Obamacare-hatin' Sheriff Richard Mack has already clarified that he is not looking for charity, and also, thank you for all the charity, please send more charity. Now, Sheriff Mack's supporters have reached down, grabbed the Sheriff's bootstraps, and announced that they want DOUBLE the amount of other people's money they originally said they wanted.

It's all a bit confusing, but here's the latest constitutionally conservative note posted to Mack's GoFundMe page, which several of you may have already visited.

Let’s go again!! The goal of this GoFundMe is to help Sheriff Mack and his wife pay all of their hospital and medical recovery bills and basic living expenses for a few months so that they can return to service stronger than ever. We are all grateful for each person who helped reach and exceed the first milestone of $30k. Let’s go to second base ... on to 60. Thank you so much!

Excuse us, sir, but Yr Wonket would appreciate it if you'd buy us a drink or two before you even think about heading for second base. We are a cheap date, not a free one.

How high do we think he'll go here, honestly? If they clear sixty, will they ask for one hundred?

Furthermore and such as, Yr Wonket went and did actual journalism by surfing the Internet web highways over to the DREAD OBAMACARE WEBSITE and pretending we were Sheriff Mack for a second (kind of). We began by finding out what the hell kind of zip codes they have in Graham County, Arizona, anyway, and then we typed those numbers into the thingy. We also asked if we qualified for a "Special Enrollment Period," because what's the harm?

Then we went and filled out the Special Enrollment Period's highly intrusive questionnaire. The first question asks if you were unaware that Obamacare was the tyrannical law of the land prior to February 15, 2015, and we wondered for a moment how Sheriff Mack would answer this question. We imagined that Mack would object to the premise that Obamacare can rightfully be called a law, complain about Nancy Pelosi saying she didn't read the bill, and then spend the rest of the day flicking his own butthole.

We checked "No" for all the potentially qualifying conditions, except for "Had a change in income," which we believe is accurate and consistent with the best practices of mommyblog journalism.

We then submitted our questionnaire, and we expected to be denied immediately. Because, right? No way it was that easy, we thought as we drank a leftover domestic macrobrew we found on a ring of something sticky in the fridge. It could not possibly be as easy as telling a website, "sorry, am broke now, health insurance pleez!"

But that's exactly how easy it was. While Mack's appeal would have to be reviewed and approved by actual, human people, our hypothetical responses for a person trying to get health insurance in Graham County, AZ was this:

So there ya go, you dumb old stupid buttface. Go pay your premiums and quit freeloading off the rest of us.