This Is SOME BULLSHIT: Michigan Keeping John Conyers's Seat Empty For Rest Of His Term 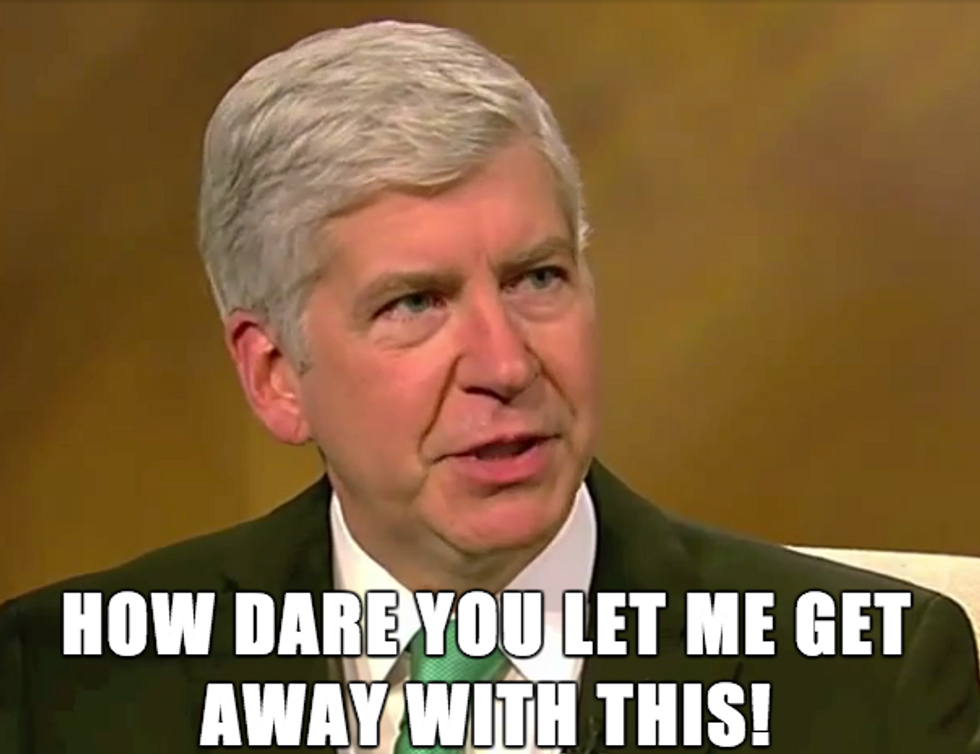 Why the hell is the Michigan Democratic Party down with Rick Snyder's plan to hold John Conyers's seat open for 11 whole months? We get why the Republican governor wants to deny representation to the Democratic residents of Detroit -- and we're sure that Paul Ryan was thrilled to unwrap that early Christmas present. But why are Michigan Democrats going along with him? Can they really be craven enough to deprive 700,000 people of Congressional representation just to leave the field open for one of their own to take the seat? Because it sure looks like it! And while we're all in agreement that Democrats need to start playing dirty, this is not what we had in mind.

John Conyers resigned less than halfway through his term after being accused of sexual harassment by multiple women. Conyers did a lot of great things in his five decades in Congress, but didn't exactly cover himself in glory on the way out the door. Despite having no relevant political experience and a prior domestic violence arrest, Conyers endorsed his son John Conyers III to take over for him. At the same time, his nephew Ian Conyers, a state senator, is also claiming the endorsement, exacerbating the appearance of a dynastic sense of entitlement to the seat. Not a good look!

Let's slow-walk through the stupid here. If it seems so implausibly ridiculous that your head starts to hurt, you've probably understood correctly. As of today, residents in most of Detroit and parts of Wayne county have no Congressman. On August 7, they will cast a vote in the special election primary to fill Conyers's seat. They will ALSO cast a vote in the regularly scheduled primary for the same seat. On November 6, they will again cast two votes. The winner of the special election will be sworn in, just in time for Thanksgiving and Christmas recess. The winner of the general election will be sworn in for a full term on January 3, 2019.

Effectively, Conyers's seat will remain vacant for the rest of his term. Here, let Governor Snyder 'splain to you why this really is just great, via Detroit News.

“Having ample time for candidates to make a decision about running for office and file their paperwork gives people more options as to who will next represent them in Congress,” Snyder said in a statement.

“In order to allow several months for that to take place and to reduce the financial burden on local taxpayers, the primary and general elections will be held when regularly scheduled elections are already occurring.”

He's just doing it as a favor to Democrats, see? So they have time to get their ducks in order.

And we get why Snyder thinks this is a wonderful plan. Not only does it decrease the margin House Republicans need to ram through their rape'n'pillage legislation, it deprives Michigan Democrats of a national voice on the ongoing water crisis in Flint. And it's a final Fuck You to John Conyers, who slammed Snyder for poisoning the water in Flint and said the Governor should be arrested. (WHICH HE SHOULD.)

Snyder claims to have consulted officials in Wayne County and Detroit before setting the election date for the potentially crowded primary.

Jonathan Kinloch, who chairs the Democratic Party in the 13th District, wanted Snyder to set the special election to coincide with the regularly scheduled election dates in August and November, even though it leaves the seat vacant for months.

He said the district offices remain open to serve constituents in the meantime.

“This seat only becomes available once every 50 years,” Kinloch said this week. “We all know that in those special elections that are called outside the normal election cycle that voter turnout is less.”

WTF??? Michigan voters should have no voice in Congress for almost a year to avoid a low-turnout special election? The district office is a substitute for Congressional representation? Is there something special about "this seat" that entitles the holder to a 50-year term? FFS, they'll be lucky if the seat exists at all after the 2020 census when Michigan is likely to lose one of its congressional districts.

Goddamit, Democrats! Rick Snyder is a scorpion, of course he bit you. But you didn't have to bend over and offer up your ass for a stinging. It's pathetic!

Are you a good Wonker who sends us money by Amazon? Well not anymore you’re not, because Amazon done fucked our payment system. Would you be so great as to re-sign with Paypal or Stripe? (The rest of you can too!) K we love you bye.