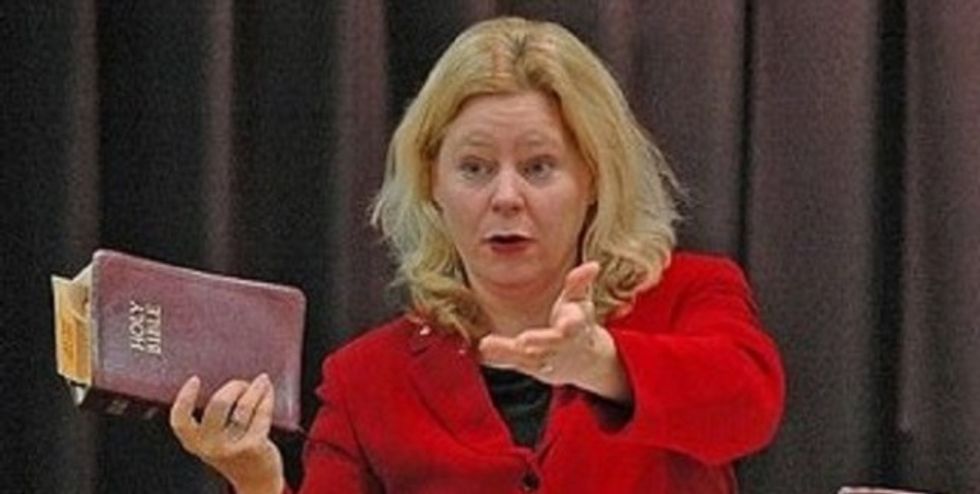 Here is a nice lady, Janet Porter. She lives in Ohio, and she thinks gay people are going to have Christians put in jail and that they also cause hurricanes -- the gays are very powerful in Cincinnati! But nearest and dearest to her warm heart is her "Heartbeat bill," which outlaws abortion once a fetal heartbeat can be detected. So if you don't want your doctor to face a year in prison for performing a medical procedure that the United States Supreme Court ruled was constitutionally protected, you better get your ass to the clinic within a week of missing your (surely extremely regular) period, because fetal heartbeats are detectable within six weeks of the first day of your last rag!

Porter's Heartbeat bill passed both chambers of the Ohio legislature after it was added to a child abuse prevention bill; if "moderate" Gov. John Kasich -- who has signed legislation banning rape crisis counselors from saying "shmashmortion" and also gutted the fuck out of Planned Parenthood -- signs the bill, then there will be pretty much no abortions at all! But as Donald Trump explains, sometimes you just have to drive to another state for your constitutionally protected right to privacy.

Kasich has said he doesn't like the Heartbeat bill, because of "Constitution."

Prior to the House vote, Emmalee Kalmbach, spokeswoman for Gov. John Kasich, declined to comment on the bill. However, Kasich said on several occasions in the past two years he opposed the Heartbeat Bill, primarily because of constitutional concerns. The governor could line-item veto the abortion language since it contains a $100,000 appropriation to create the Joint Legislative Committee on Adoption Promotion.

Hmmmm, what do we think, will the Ohio governor forget he hates women's health and line-item veto the abortion part out of the child abuse part, and make all his supporters :( ?

Arkansas and North Dakota have both had Heartbeat bills struck down by the 8th Circuit Court of Appeals; the US Supreme Court declined to give the 8th Circuit's decision a little look-see, which means it stands. But with Mike Lee or Keith Blackwell or Ted Cruz (LOL) on the Supreme Court, you can expect that to change a tiny. They will overturn the constitutional right to privacy guaranteed under Roe v. Wade, and all the little angel babies will be born, and then we will call their mothers lazy slut welfare queens for needing help caring for the little angel babies, and they can write off their Cadillac nanny plan (IF THEY ARE LEGALLY MARRIED), like God and Ivanka Trump intended.

But back to that nice Janet Porter lady, who just got her Heartbeat bill passed. RightWingWatch, would you like the last word?

Porter, who runs a group called Faith2Action, used to host a radio show on the conservative radio network VCY America, which she used, along with online columns, to promote conspiracy theories such as birtherism, a chain-email-based allegation that President Obama was a Russian communist plant, and the claim that the Obama administration was preparing to round up conservatives and put them in internment camps. She also blamed Noah’s flood on gay marriage and predicted that President Obama would meet with Osama bin Laden.

I smell a leading contender for the Supreme Court!