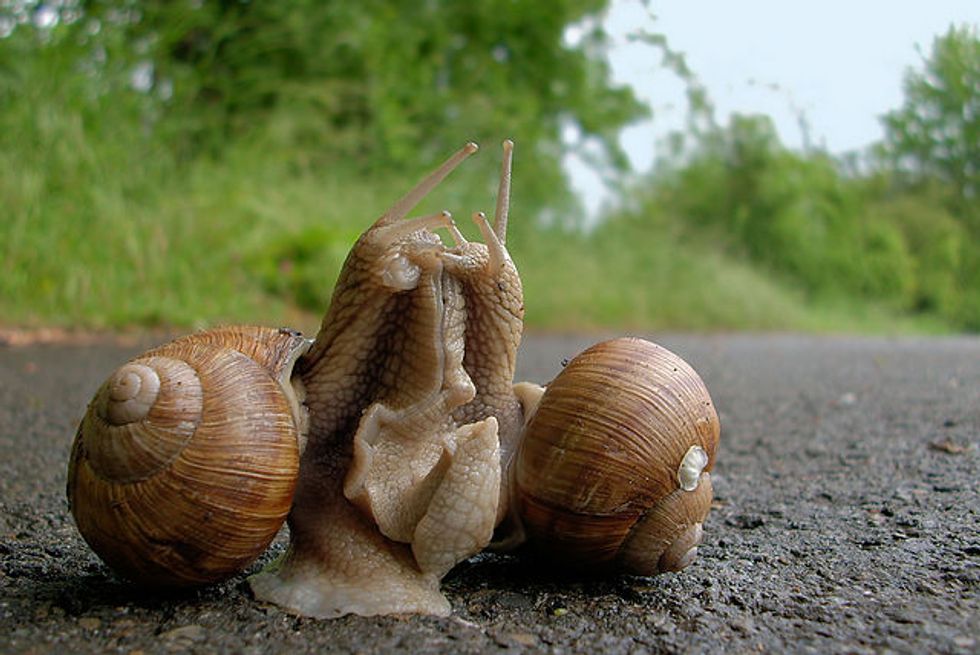 RIGHT IN FRONT OF MY SALAD?

Wonkers, this story from NPR has everything. There are #ScienceFacts and #Sadness and #Sexxx and #Snails in it! OH YES and there is #Romance!

So, we were not previously aware of the saga of Jeremy, a British snail with a very rare condition where its shell twisted to the left. (Snails are hermaphroditic, therefore this is not his shell or her shell, OK?) Now, this would be no big deal, but snails with left-twisting shells are actually incapable of fucking snails with the usual right-twisting shells. This means Jeremy was a dork virgin!

Anyway, Jeremy died last week, but don't worry, because NPR reports that before it went to be with the Lord, Jeremy, who was always DTF but never could seem to meet the right snail, did some FUCKIN':

Reader, before he died, Jeremy procreated.

That's right. The little lefty did it.

YEAAAAAAAAAAAH, everybody please cheer for the snail sex!

So basically some scientists in the United Kingdom were very concerned with Jeremy's love life, so they updated Jeremy's Tinder profile to say, "I WOULD LIKE TO FUCK SOME LEFTY SNAILS PLZ." And lo and behold, two lefties were found! There was Lefty, whose snail parents couldn't be bothered to come up with an actual name, and who is a British snail like Jeremy. There was also Tomeau, who was from the exotic land of Majorca, Spain. Tomeau traveled a long way!

"The way snails mate is "fantastically bizarre," [evolutionary biologist Angus] Davison says. The carnal act is known as 'traumatic insemination,' and copulation kicks off by mutually stabbing each other with 'love darts' — tiny calcium spears that transfer a hormone. Snails are simultaneous hermaphrodites, he says, meaning that they are both male and female at the same time and will 'reciprocally fertilize each other' and ultimately each produce offspring.

OK, so snails are kind of weird, you guys.

But anyway, this was great. Jeremy was going to get to go on dates with Tomeau and Lefty and, we dunno, maybe do a rose ceremony at the end once Jeremy figured out which snail was the hawtest, but then TOMEAU AND LEFTY WENT ON A DATE WITH EACH OTHER AND REFUSED TO STOP BONING:

It seemed like a happy ending. But then, as [NPR journalist Merrit Kennedy] reported this spring, "what had been a snail fairy tale has turned into something of a tragedy for Jeremy. Its two possible mates proceeded to mate with each other instead. They've been feverishly reproducing, with three batches of eggs between them."

Motherfucker! Is that not always just the way? Lefty and Tomeau got all the snail ass, and Jeremy, whose plight was entire whole point of this, did none of it. Why, if Jeremy had been a human rather than a very unique snail, Jeremy could have ended up being one of those weird Manosphere douchebags Robyn writes about every Saturday.

(We are unable to science-confirm whether Jeremy was in fact a dick and deserved the rejection. NPR doesn't say and the other snails are not available to dish on this drama, because Snails. Can't. Talk.)

But hallelujah, because we guess Jeremy and Tomeau finally saw each other under the bleachers one day, looked at each other all "How YOU doin'?" and immediately engaged in full throttle no-holds-barred snail coitus. THREE TIMES.

Short version: Tomeau got pregnant with ALL THE SNAILS. (Fifty-six, to be exact!) Some of them are Lefty's, and some are Jeremy's, and they all lived happily ever after, except Jeremy, because like we said he died.

Did we not say this story had everything? If you want to know more about the science of it, click over to NPR. If you're shallow like us and just want to make snail-fucking jokes, stay right here in your OPEN THREAD.