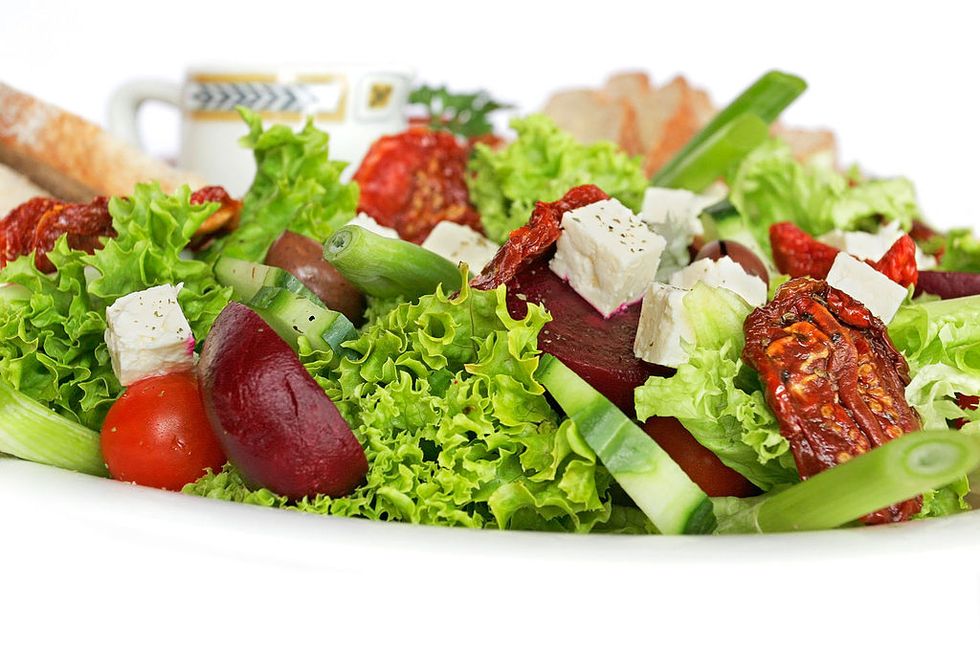 ByFir0002Welcome back to Off The Menu, where we bring you the best and strangest food stories from my email inbox. This week, we bring you some of the most spectacularly insane restaurant stories we've ever heard. As always, these are real emails from real readers.

There used to be a rundown Mexican place in Kilgore, TX that the locals called Cancun Dave's. While grabbing a quick bite one night with my husband, a family of four gets seated next to us. We don't really notice anything out of the ordinary until the greatness begins. In a VERY thick Southern accent, we hear this conversation:

Mother to son: "BOY! You been sniffin’ them markers again!"

Mother: "Boy! Don't you lie to me! I see that there blue under your nose!"

Verbatim. No lie. Our waitress nearly dropped a plate of food as she tried to get to the back to contain the squeals of laughter. I, on the other hand, lack the grace and/or sense to bother trying. I laughed so hard and long that I was crying and gasping for air.

The mother was not amused.

I worked for a chain pizza joint in a small town throughout my college days. I was primarily a delivery driver but also answered the phones and did whatever.

One time I took an order from one of the local motels, which was common enough, since our menus were in every room. The lady who ordered asked for a style of thick-crust pizza that was topped with a healthy layer of cheese which hid any toppings on the pizza. The toppings she ordered were mundane, pepperoni and sausage with various vegetables. And mushrooms on half.

Then she explained her husband was deathly allergic to mushrooms and there absolutely must not be any mushrooms on or touching the side of the pizza not meant to have them.

Now, it's entirely possible her husband just didn't like mushrooms and she was lying for him. But she sure kept saying they were going to kill him a lot. So I passed the order on to our make line and then immediately went over to explain the situation. I and the guys on the make line ended up using three pepperoni slices to mark the side with the mushrooms; two on either side of the border and one marking the side the mushrooms were on.

I babied this pizza, watching them make it, putting it in the oven, taking it out of the oven, and carefully cutting it. I left the pepperonis on as markers. And since this was such a trial and the motel was nearby, I also took the pizza to hand-deliver it to these people.

The woman who answered the door when I knocked was older, perhaps in her 50s, and her husband maybe a bit older still. I handed off the pizza, explained to her the meaning of the pepperonis, and we chatted about how her husband was deathly allergic to mushrooms and what measures I had taken to make sure there were no mushrooms on his side of the pizza. Then I immediately left and called my manager as I drove back to tell him the pizza had been handed off and he should expect a super angry phone call at any moment.

No phone call came, which is perhaps the weirdest part of this story. I kind of wish I could follow these people as they navigate other restaurants because even if it's a lie, the only thing she was more emphatic about than her husband being allergic to mushrooms was that she was not going to let this remove mushrooms from her own life.

I work at a large Fortune 100 company that has a food court. There's the normal grill and fryer areas along with a salad bar, and two sections that rotate every week to something different. This week in particular was the turkey dinner with mashed potatoes.

I'm waiting in line for my food, when I overhear an individual I can only describe as "Toad Woman" barking at one of the familiar chefs behind the turkey dinner counter.

TW: "Do you have any raisin sauce?"

TW: "Raisin sauce, you know what I mean? The raisin sauce!"

Cue Toad Woman getting louder and louder with each request for this mysterious raisin sauce.

Chef: “Do you mean cranberry sauce?”

Chef: "I'm sorry, but I don't know what raisin sauce is, and we've never served it here."

At this point, Toad Woman stomps off in a huff with her turkey dinner to the checkout. I walk up to the counter and ask for my turkey dinner. When the chef asks which sides I would like, I toss in, "The raisin sauce, like grandma used to make!"

This is now a running joke between our department and the kitchen staff.

I was working at Mellow Mushroom in college. If you're not familiar with Mellow Mushroom the pizza chain or mellow mushrooms in general: they are quite popular with hippies, jam band enthusiasts, and anyone you assume is stoned when you speak to them. While I worked there, Jack Johnson released an album.

I knew of Jack's work. I wasn't what you'd call a fan, but I'd nod in time at the radio if I heard his single. Turns out hippies fucking love Jack Johnson. Like, a LOT. I was working open to dinner rush the day the album dropped. During opening they normally played something edgy to wake everyone up.

Not today. Not on Jack Johnson day.

One of the servers walked in with a copy of the album before we even had all the lights on, held aloft as though it were the olympic torch. It was immediately taken upstairs to be added to iTunes and played. We opened and the usual customers rolled in. People kept asking them to start the album over because they hadn't heard it yet.

The album literally played on repeat. I worked from 10 am to 8 pm with Jack Johnson's new album on repeat. I actually broke down sometime during the dinner rush. I started SCREAMING in the open kitchen "IF I HEAR THIS HIPPIE SHIT ONE MORE TIME I'M GOING TO FUCKING KILL SOMEONE!"

My boss put on bluegrass to try and annoy me. When he asked if I liked that better, he saw me singing the baritone part of "Tom Dooley.”

I worked at a pizza delivery place in high school with a guy named Jeff. Jeff, as we all were, was a goofball. One night Jeff was closing with the owner's wife and had just finished mopping the floor. He decided to do a little bit of a 'risky business slide' from the front of the store to the back (it was basically a straight line from counter through kitchen past the walkin and into the office and sink area in the back). Jeff got a running start and went sliding ... right into pile of folded boxes for the next day.

The owner's wife was closing that night and had apparently just had enough. She came storming out of the back office already yelling at him in Serbian. Inevitably, she slipped and fell flat on her back on the wet floor. In her anger, she grabbed the foot of her now-detached prosthetic lower leg, pulled it out of her pant leg, and threw it at Jeff. It missed.

I’m not proud of this, but I once took my mother to lunch at Olive Garden. It was close and she had a hankering for their bread-sticks. This particular OG had two seating options: Wait for the rebirth of Cthulhu, when perhaps a booth or table would open up, or immediately sit in the bar area, which was like a little bistro, just behind the hostess stand.

We sat in the bar area.

While waiting for our drinks, my mom looks around and spots a nice-looking guy sitting by himself, a few tables over. Because she is one of those people who genuinely want to play matchmaker for the entire world, she earnestly whispers to me, “I wonder why he’s alone!” I shrug, not really caring.

But oh-ho! We were about to find out why he was alone.

Midway through our salads, the Lonely Gentleman also received his giant bowl of salad. You know how OG brings you like a punch bowl of lettuce? Out of the corner of my eye, I realize that the Lonely Gentleman is lifting FIST FULLS of salad out of the bowl, straight into his maw. I wonder if the waitress forgot to give him silverware and he’s just really hungry?

Waitress comes by REPEATEDLY, simply to leave him silverware. The first try is silverware wrapped up in the napkin. Then, because apparently she’s worried he was somehow foiled by the napkin which obscures the mysterious food-to-face implements, she comes by again to lay just the unadorned silverware right next to his hand (which presumably is covered with salad dressing). Lonely Gentleman looks at them, smiles at her, and goes RIGHT ON EATING. WITH HIS HANDS.

Mom can’t help but keep glancing at this spectacle, and remember, the bistro area is right behind the hostess station, so she ain’t the only one -- most of the waiting patrons are watching this guy in fascinated horror, although he remains blissfully oblivious of the attention. At this point, I wonder if it’s just a weird thing, like his mom never taught him to eat salad? Or maybe he’s from somewhere that salad isn’t really common?

Then he orders spaghetti and meatballs. Friends, you remember that scene in The Wedding Singer where Adam Sandler is paid in meatballs by Rosie, the little old lady? She makes him take a bite and it’s really fucking weird and gross? Now imagine that over and over and over again as the Lonely Gentleman chows into his meatballs, just double-fisting those bastards, and add to that the image of him slurping up the pasta, all with a vaguely unconcerned look on his face. He gets a smear of sauce on his nose and doesn’t seem to realize it.

He DID use his napkin between courses, and he’s definitely seen the silverware. There’s no stopping the Lonely Gentleman, y’all -- it’s motherfuckin’ DESSERT time. He selected a hand-flavored ice cream sundae, tilting his head back to drop melting finger-fulls of chocolate and vanilla down his throat. Have you ever seen a grown ass man eat a ball of ice cream like you might eat an apple? No? Take it from me: It’s fucked up.

He leaves, an aggrieved-looking napkin balled onto the table in his wake, and of course my mother and I flag the waitress down to ask her about him. She seemed just as disturbed as we were, but, she said, “He tipped really well!” Mom, helpfully, she believes, looks at the sweet waitress and says, perfectly seriously, “You know, I bet he’s single!”