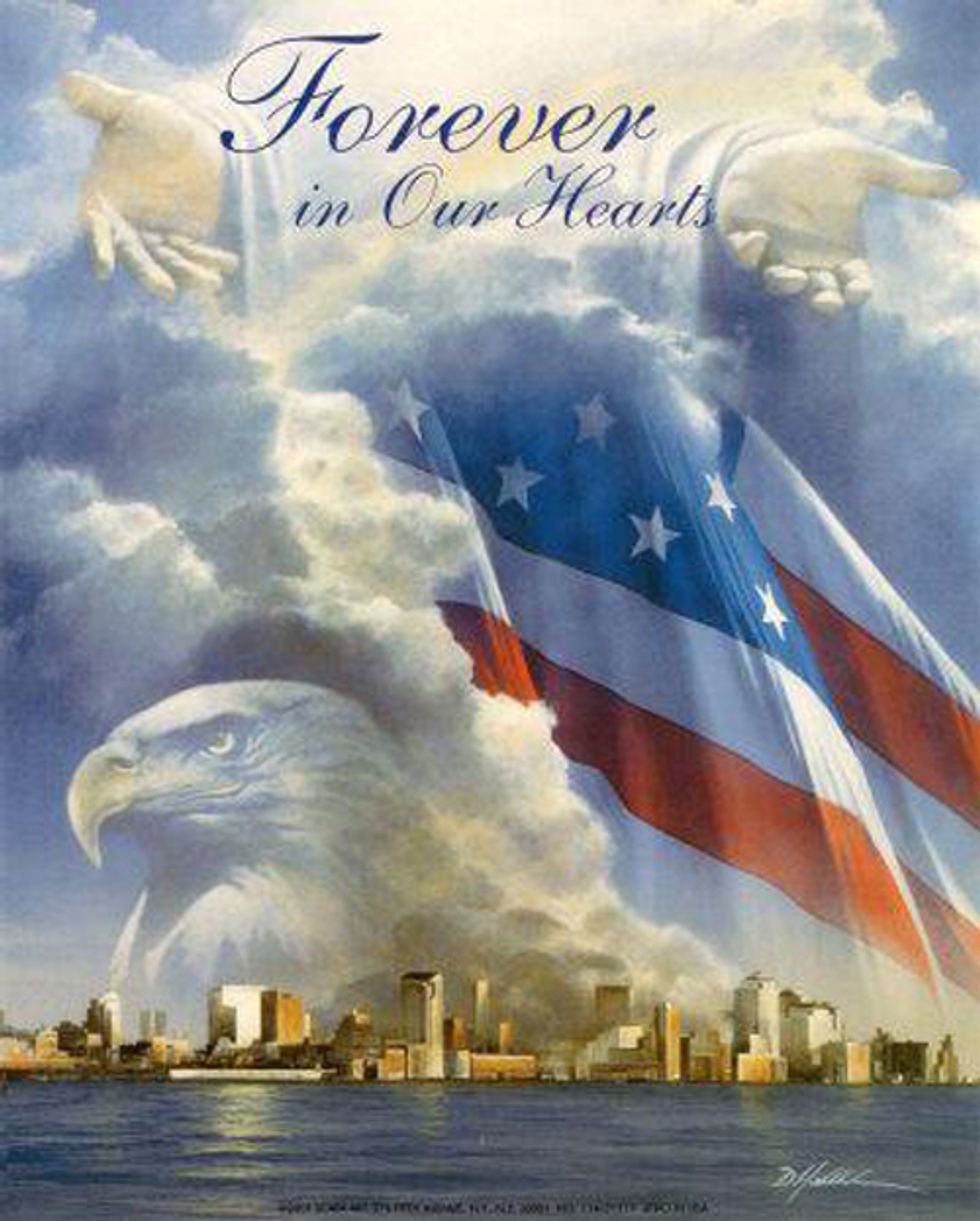 Every year on this rotten day, we repeat this beloved 9/11 feature, sort of like how A Charlie Brown Christmas plays on the teevee every December. We thought the terrible art herein had been lost forever in the Great Server Switch of a couple years back, but then we remembered to check the Wayback Machine. Original article by Ken Layne, with additional images and curatorial notes for the 2016 edition added by Yr Dok Zoom.

On this solemn day fifteen years ago, nearly 3,000 people were horribly killed so that Rudy Giuliani could earn a hundred million dollars and run for president of 9/11, and the most corrupt administration in American History could wage endless war around the world and many working-class people could affix "United We Stand" bumper stickers to their SUVs, so they could drive around with pride while eating hamburgers off their laps and listening to talk radio wingnuts. Also, "September the Eleventh" has inspired the most insipid, maudlin kitsch in the history of an already very kitschy nation. Let's look back in horror.

If you thought passenger jets could be terrifying weapons, you'll be terrified by the giant winged baby monster from Hell.

How did such a truly awful, gut-wrenching event inspire such stupid crap? It's just part of our modern, idiotic culture -- the same mouth-breathing instinct that compels people to pile a bunch of wet stinking stuffed animals at the site of a fatal car crash or make a GeoCities memorial site for Princess Diana (with animated GIFs and MIDI music of "Candle In The Wind").

Every child needs one of these ...

But nothing says "We sort of had it coming" like the endless variations of the Weeping Eagle.

Oh shit a giant eagle has eaten one of the WTC towers...

One tear for each tower. Or for each ill-advised land war in Asia

Screw it, let's just throw everything into this gif

NO UR DOING IT WRONG

You might think there's something ghoulish about this, which apparently is a real thing: Fire departments sponsoring a fundraiser for the "National Fallen Firefighters Foundation" with a 9/11 stair climb:

Dropping debris on the participants would definitely be in poor taste

These things are held all over the place, apparently. Are we alone in thinking it's a bizarre "tribute"? Maybe WE'RE the weird ones? After all, at least they didn't call it a "fun run."

This touching tweet from Fleshlight -- yes, the sex toy -- remains one of the greatest examples of excellence in 9/11 branding, and a perfect way to remember the "fallen heroes."

And if the endless pictures of the Smoke Devil accompanied by strange thoughts about the Demons Among Us weren't enough, somebody decided to bring attention to yet another mysterious animal shape in the smoke:

The fuck is that supposed to be?

Uhhhh ... Is it a chicken drumstick? Maybe the head of that little dude in "Gremlins"? A giant demonic Pepperidge Farms "Goldfish" cracker of death? Maybe a mooninite?

Others explained that He and a giant eagle ushered the souls of the dead into the next world. All except the hijackers, of course.

This one was submitted by a reader of the 2009 edition. It truly captures the can-do attitude of New Yorkers, as symbolized by perennial loser Ziggy.

Archivist's note: It's possible these are souvenirs that predate 9/11. But probably not

The Twin Towers? Or a strangely elongated TARDIS? Who can say?

Excuse me, but shouldn't that be Spider-Man? Batman lives in Gotham City. Does no one care about accuracy?

Another reader find, from a comics blog that pronounced it "probably one of THE MOST famous Batman Tattoo photos...ever!"

Everything about this is awesome

Still another submission from the comments (which even in 2009 we did not allow). Jesus's head is 150 percent larger than Santa's, and yet He has such tiny hands, like our Lord and Saviour Donald Trump. Our new favorite 9/11 commemoration. It's like the Ed Wood of 9/11 art.

What is this I can't even

A final reader submission, the pregnant furry tribute of 2003. So many questions: Is this a living tiger/eagle hybrid mourning its mate (and still gestating after two years?), or is this a fursuit wearer who perished on 9/11 and has returned in pregnant angelic form to look at her own grave while being comforted by Spike from Cowboy Bebop?

Also, a twitter search for "Happy 9/11" is guaranteed to make you ... uncomfortable.

We won't easily forget this one, however hard we try