Time To Watch Trump And Hillz Fight Each Other TO THE DEATH! Your Final Debate Preview 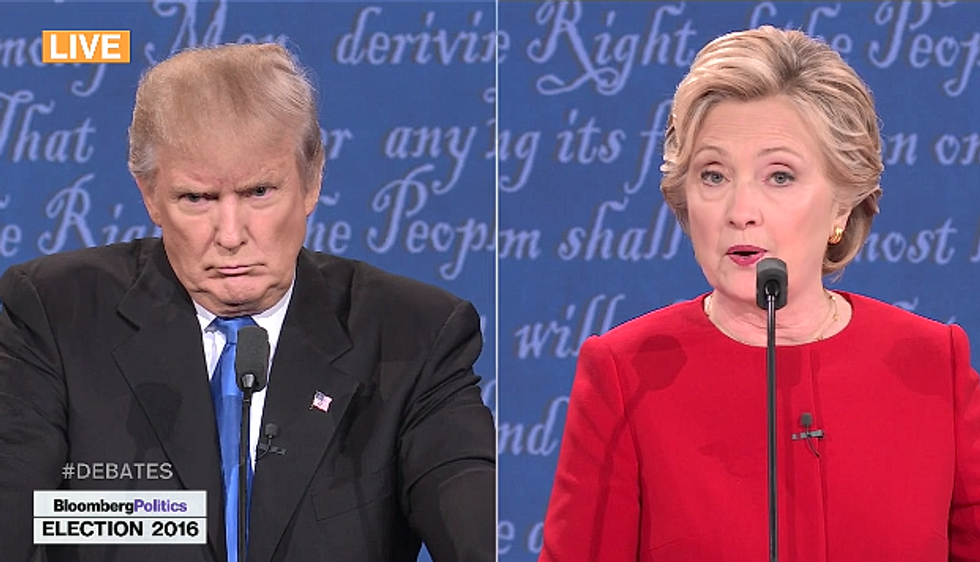 Can you believe it? It is the day of the FINAL PRESIDENTIAL DEBATE. The 2016 campaign started when we were all little girls and boys, and we had begun to believe it wouldn't end until we were all dead, but apparently it's almost over! Yes, Hillary Clinton and Donald Trump will go mano a mano this evening, which is super unfair because Trump's las manos pequeñas y finas are no match for Hillary's normal-sized las manos!

Anyway, broken Spanish aside, we have this one debate, then we have TWENTY MORE DAYS until the election, and then our long national nightmare will be over, only to be replaced by a new long national nightmare, as Trump supporters come to terms with how GODDANG BUBBA, HILLARY DONE #RIGGED IT BY GETTIN' MORE VOTES!

As usual, you have questions about Wednesday night's debate, and we will feign an attempt to answer them to the best of our ability:

What if we just didn't watch this debate and said we did?

BUT OMG THIS MIGHT BE THE BEST, MOST CRAZIEST ONE YET!

Yeah, that is true! It may be the very last time Donald Trump gets to have such a YOOOGE audience listening to his words, so God only KNOWS what kind of hijinks, folderol and pussy-grabbing he has planned!

Hillary, for her part, has been prepping for the debate like a common debate prepper, while Trump has been out on the campaign trail making fun of Hillary for staying at home napping for the past week.

Will this debate change the course of the election?

Unlikely. We're, again, twenty days out. Unless Trump has a meltdown more hysterical and more insane than anything we've seen thus far, continuing his downward spiral into BIGGEST LOSER EVER territory, or unless he finally produces Hillary's whitey tape, we doubt it moves the needle in the polls.

Will they talk about issues?

HAHAHAH PFFFFFFT what kind of Banana Republic do you think America is?

[wonkbar]<a href="http://wonkette.com/607494/wikileaks-now-featuring-hottest-recipes-from-devil-hillary-clintons-kitchen"></a>[/wonkbar]We assume moderator Chris Wallace from Fox News (we know, ugh, but he's not that bad of a moderator actually) will attempt to ask questions about issues, if he can get Trump to focus for five damn seconds. TV newsers have noted that we haven't heard much about immigration, so maybe we might get to talk about who's going to build Trump's Messican wall! And all the damning stuff we've heard about Hillary Clinton from WikiLeaks will probably come up, so expect the candidates to have a risotto cook-off at some point during the debate.

Here's an extended Rachel Maddow segment from Tuesday night about a thing they SHOULD talk about. She discusses what's really happening in the Middle East right this minute, how Russia has been setting up air defense systems in Syria, supposedly to fight ISIS, an organization that has a lot of flair but not one fuckin' airplane. We SHOULD talk about how much Trump loves Vladimir Putin so much. Will we? Dunno.

Spend 20 minutes watching all this, and then you will be S-M-R-T.

Are the candidates bringing special pals as their guests, like Trump did with all those Bill Clinton accusers?

Hillary Clinton is bringing Mark Cuban and Meg Whitman, because Trump is intimidated by actual billionaires.

Donald Trump is bringing Barack Obama's half-brother Malik Obama, because for some reason he's still trying to settle a score with Barry. He is also bringing Pat Smith, a Benghazi mom who hates Hillary very much. We don't have anything mean to say about her, because the woman's been through a lot. It's pretty disgusting how the GOP has used Smith as a pawn to further its Hillary-hating agenda, though.

Hillary will be rattled by the presence of exactly zero of these people.

OKAY FINE, we are watching. What time, what channel, what should we wear?

It's on all the major channels at 9 PM ET, which is "a time" in other "time zones." Or you can watch it online here, or one million other places, just Google around for a livestream. Or if you are in Chicago, you can come to the final Wonkette Chicago Drinky Debate Watchy Party. Click for details!

You should wear common pants, or maybe a Teenage Mutant Ninja Turtles onesie, because we have one of those, and it is badass and sooooo comfortable, or, you know, this.

(Now in women's sizes, because what are we, a bunch of MENINISTS???)

OK, see you tonight for the liveblog.

See YOU tonight for the liveblog!