TLC: What If We Did A Show About The Duggars Who DON'T Diddle Little Girls? 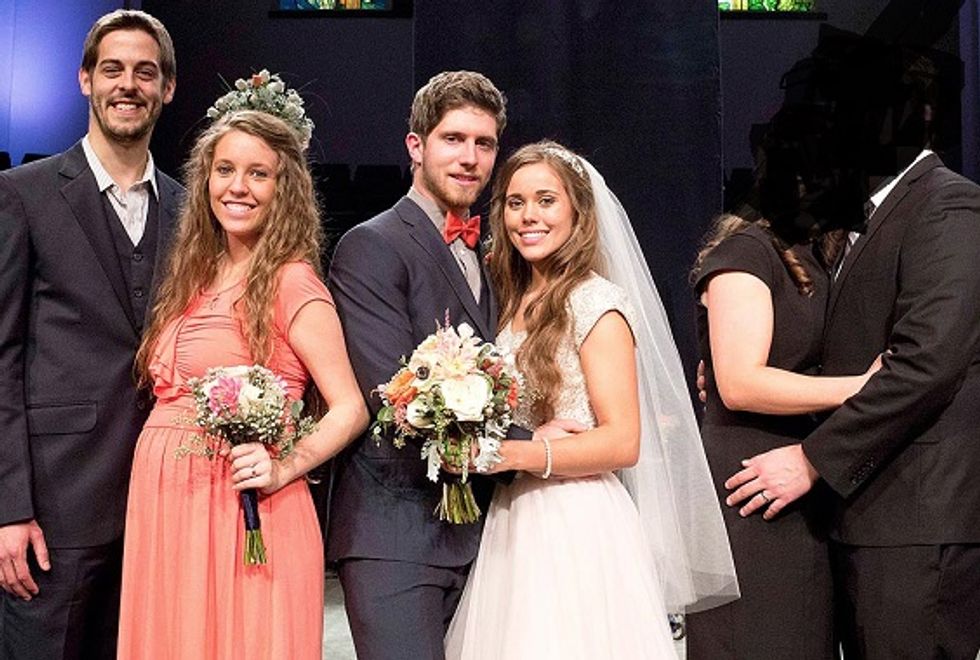 With all the revelations of the past week that Josh Duggar, eldest son of Jim Bob and the Clown Car Vagina, molested five girls that we know of, including four of his sisters, when he was a teenager, one would think this might be a moment for TLC to sit back and go, "YA KNOW? Maybe our little business plan of putting fucked up people on the teevee, and then being shocked when we find out that they are fucked up, is not working so well anymore!" TLC announced it is pulling 19 Kids And Counting for now but that no final decisions have been made as to the show's future, even as advertisers run for the hills because who would want to be associated with that gross family now?

TLC, that's who! So here's an idea to keep making money off the Duggars. What if they did a spin-off, like when Frasier moved to Seattle to be closer to his dad, except this time, it would be the other married Duggar children, the ones what don't molest people (that we know of), and they could have their OWN Duggar show, about sidehugs and awkward sin boners and stuff? Problem solved!

"They've invested a lot of time in developing these story lines and the last thing they want to do is to throw it all away,” a source tells Us of the controversial Christian family’s show, adding that Josh, however, will not be a part of any filming.

Well, we would imagine not! Especially since there are reports out there that Josh Duggar is the sibling everybody hated anyway and (gossip gossip gossip) this is why Josh wasn't a part of Jessa's or Jill's weddings.

So, though TLC's official statement was that it is "deeply saddened and troubled by this heartbreaking situation, and our thoughts and prayers are with the family and victims at this difficult time,” it sounds like TLC's grief counselor has advised focusing on the positive, which is that it gets the best ratings with the young married Duggars anyway:

Last October, a series-record average of 4.4 million people tuned in to see 19 Kids And Counting’s crazy-in-love virgins, Jill Duggar and Derick Dillard get hitched — and perform their very first kiss and first fully sanctioned frontal hug. TLC was the No. 1 cable network of the night in total viewers and among all key women demos (3 rating with women 25-54 and women 18-49). The episode was the network’s most-viewed telecast in four years.

See? It's not like they even NEED the molesty one, or the parents who wait A YEAR to report sexual abuse in their home, and then (maybe) lie to pedophile cops about just how much their spawn is molesting folks.

Every character in this story is so gross. It's one thing that the network has moved right on to worrying about the bottom line, but we are impressed with the young married Duggars' ability to immediately try to find a way to profit off this and get their own show. Grifters gotta grift, yo, and it beats having to work for a living.

All we know for sure is that this is gonna piss Honey Boo Boo's mom RIGHT off. WHERE'S HER GODDAMN SPINOFF?