Today Marks Either The 500 Year Or One Year Anniversary Of Trump's Presidency. Hard To Tell! 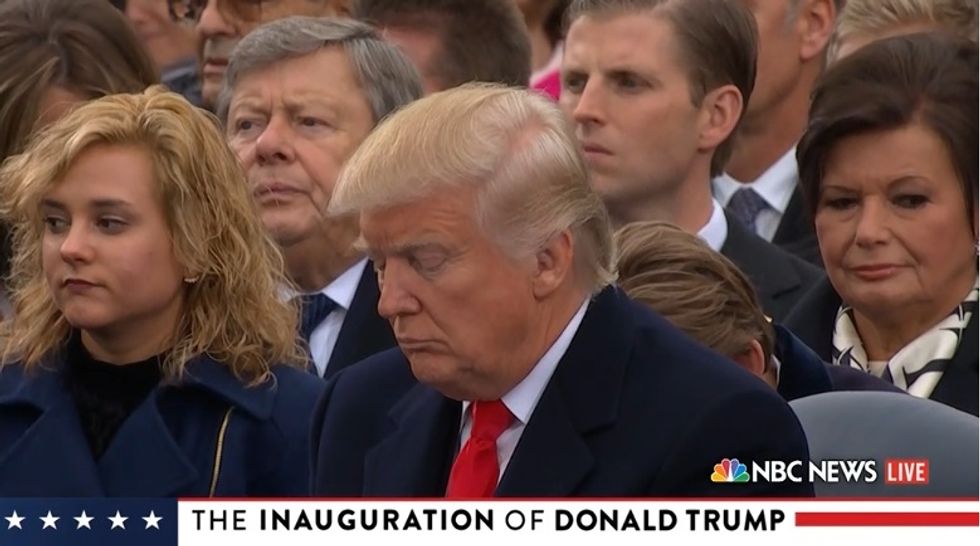 As of today, it has been approximately 500 billion years since Trump first took the oath of office. We are weary, we have forgotten what it is like to not have agita -- and yet somehow we soldier on, scandal after scandal, the odds that we will survive the next three years without coming face to face with a nuclear bomb getting growing ever less in our favor.

This also means that it is the anniversary of Kellyanne Conway wearing that ridiculous Gucci majorette outfit.

We've lost net neutrality. We saw him condemn millions of suffering people all over the world to die of horrible diseases just because the hospital that gives them their malaria and HIV meds also performs abortions. We saw the ACA get fucked. We saw the rich get their taxes cut, taxes which will eventually have to be made up for by the rest of us. So, so many very bad things happened, and through it all, he just kept freaking tweeting. Tweeting and golfing, golfing and tweeting.

In case you've blocked out all of the horror over the past year, allow us to refresh your memory with Wonkette's top ten Trump-related posts!

10. Kellyanne Conway Knows Trump Died On Cross So You Might Have These Beautiful Easter Eggs

7. Joe And Mika Officially Dumping Donald Trump Like The Filth He Is

5. Trump’s Call To ‘Help’ Charlie Gard Is Both Cynical And Cruel, And Fuck Him

3. Chicago To Trump: Go F*ck Yourself

2. Is Obama’s ‘Wire Tapp’ The End Of Donald Trump? Maybe! A Holy-Shit-Y’all Investigation Into WTF!

1.James Comey Kept A Motherfucking Paper Trail On Trump Because COMEY. IS. A. MOTHERFUCKING. BEAST.

Share YOUR favorite Trump moments in the comments, won't you? And also TIP US because we've gotta pay for our therapy bills somehow!