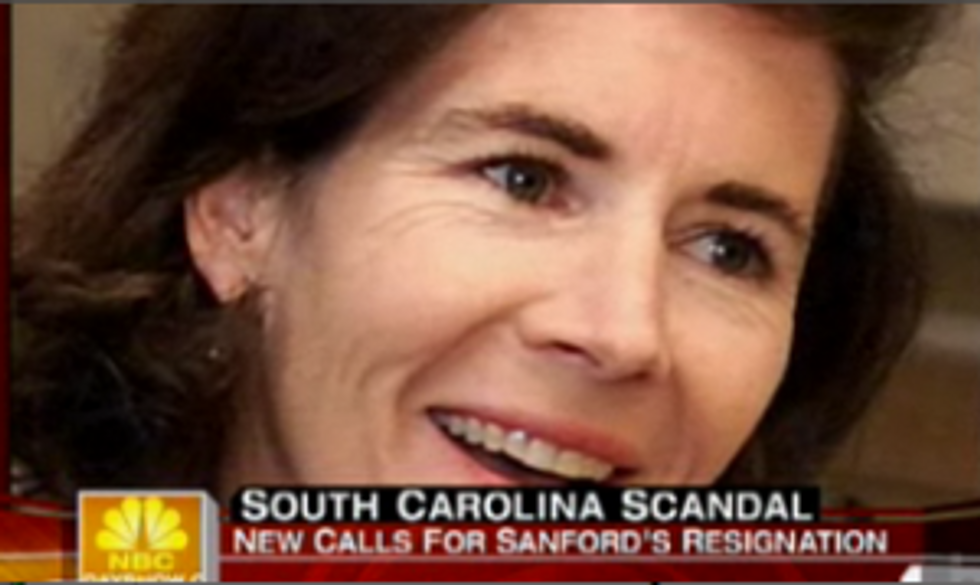 Mark Sanford! You might remember this guy from a few days ago, when he cruellyMichael Jackson ex machina'ed what was supposed to be the Summer of Becton. His insane emails were of a more pornographic persuasion than those of Becton, so out of obligation to democracy, all of America's GChat statuses then changed to reference Sanford. Alas! Tables turned again, with Michael Jackson playing the role of "Michael Jackson," and everyone forgot about Mark Sanford and his Argentinian inamorata. That about brings us up to speed, to today, when Sanford and Sons and Wife took separate cars to some Faulknerian Camp David, which is, according to Sanford, symbolic of why Sanford is not resigning from his governorship or his marriage. In fact, according to a one "Tom Davis," who controls all South Carolina politics from his Michael Crichton-themed masturbatorium under Sanford's porch, SC lawmakers are looking to Jenny Sanford for clues about how angry they should be, at Mark, for cheating.

So reports The State, MVP news source in all this:

The governor's efforts to stay in office appear, in the minds of some lawmakers, to hinge in part on his ability to salvage his marriage. While several critics wants a criminal probe and others want him to step down, reconciling with the first lady does have sway among legislators.

"That's almost become a proxy for how some are looking at this. They're looking at Jenny," said state Sen. Tom Davis, a Beaufort Republican and former Sanford chief of staff. "In large measure, it depends on how things work and how people see things are working out between the governor and first lady."

In other words, Mark Sanford will have to make this up to the state of South Carolina by convincing his wife, a metonym, to continue to have sex with him, despite forgoing previous opportunities of this sort in favor of gorging himself on Italian food in South America with one of its sexy nationals.