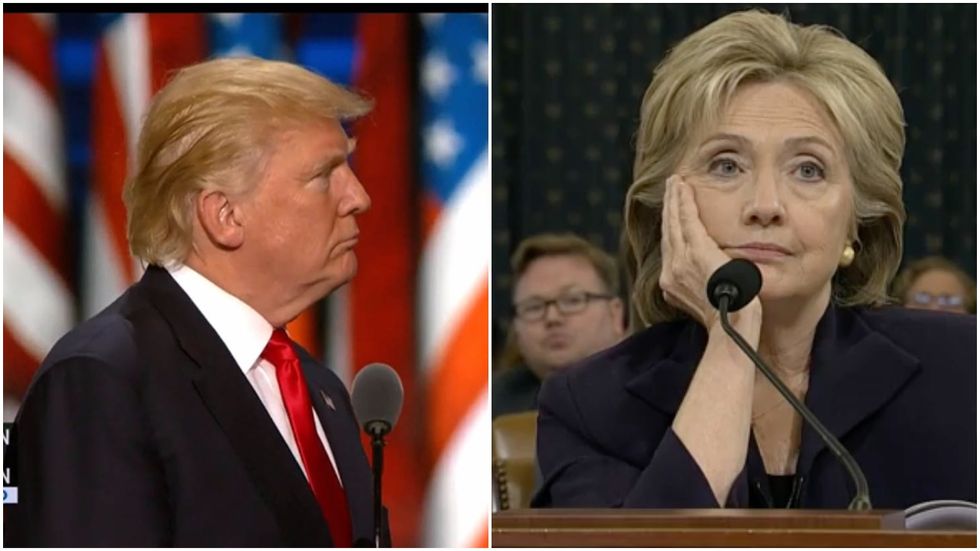 Oh lordy, it's been a long time since we've done one of these debate preview things, hasn't it? We did them all through the primary season, which consisted of 31,246 debates and 57 states of primaries, and somehow, we have made it to the general election, and the first real debate is TONIGHT! As always with these things, you have questions about what's going to happen, and we have some vague answers and also some bullshit we're making up on the fly.

So who is debating tonight? Is this for the American election? Gosh, we hadn't even noticed one of these things was going on!

Well then, you are A Idiot, because this has been the most painful election season of our entire lives, and we think we have PTSD. Anyway, Hillary Clinton, a qualified woman, will go up against Donald Trump, a Hitler-esque loon with tiny hands and an orange spray-tanned body.

When is this thing on? Is it on the television and on the internet?

Nah, just the radio. Better gather the family around and listen close!

It is at 9 PM Eastern, which is 8 PM in Central, 6 PM in Pacific, and "a time" in "Mountain," which is not actually a thing. It will air on Twitter, and on ALL THE NETWORKS KATIE, except probably not Food Network, which will air several episodes of "Chopped."

Oh that is a great show, we would like to watch that instead!

WE KNOW. It's so 'sciting, watching the people make creative foods and compete for sexxxy prizes!

So which are you liveblogging tonight, Wonkette? The debate or the "Chopped" marathon?

Going to let that one be a surprise!

We would like some heavy reading about what to expect in tonight's debates, because we are a goddamn dork.

We knew that about you. Here, read the New York Times about how Hillary Clinton has been reading things and practicing and figuring out the best ways to slice directly under Donald Trump's thin skin, while Trump's people are setting expectations really low, probably in hopes that if he makes it through the debate without playing with his poo, he will be declared a competent winner. When you're through with that, read James Fallows's long thinky-thinker piece on how the debates are likely to go.

And when you are done with THAT, read Wonket's advice for Hillary Clinton, on how to debate Donald Trump good.

And when you are done with THAT, here is a fabulous recipe for grown-up mac and cheese, for grown-ups.

Wait, a recipe? Why?

Uh, told you above we might liveblog "Chopped" instead. Just want you to be prepared either way.

Will Gennifer Flowers, alleged fuckpal of Bill Clinton, be there in the front row sitting in Mark Cuban's lap?

Hahaha, did you read yr Wonkette this weekend? If not, get up to date on whose alleged mistresses are likely to be in the audience by clicking here! (SPOILER: Probably at least one of Trump's former mistresses, just maybe!)

Is Hillary going to win this election?

She's currently ahead in all the polling that matters, but not by any margin that makes us comfortable or anything. Trump really could win this thing.

How many days until our long national nightmare of this election is over?

43 if Hillary is elected, IT'S NEVER GOING TO END if Trump is elected.

Agreed. See you tonight for liveblogging! OR WILL WE?