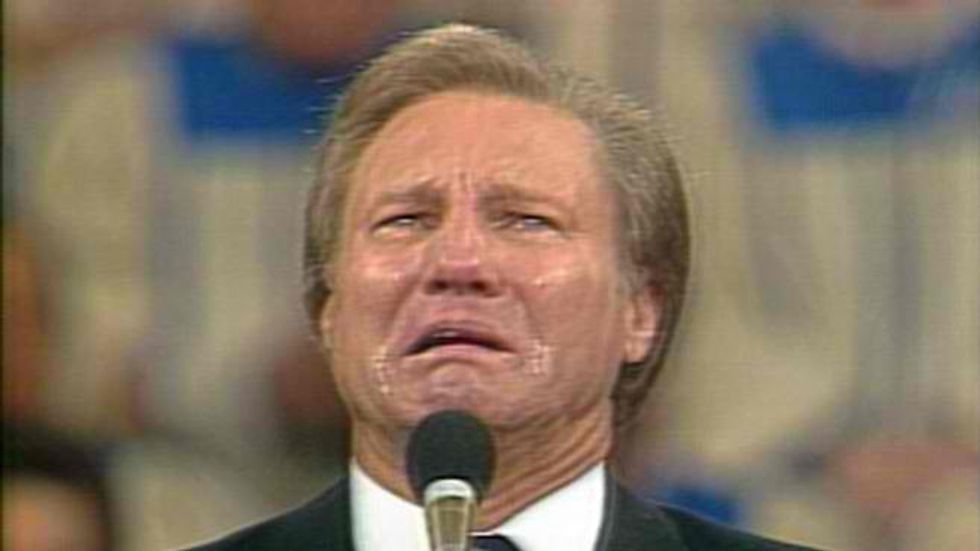 “We kind of gave him—‘All right, you get a mulligan. You get a do-over here,’” Perkins told me in an interview for the latest episode of POLITICO’s Off Message podcast.

Evangelical Christians, says Perkins, “were tired of being kicked around by Barack Obama and his leftists. And I think they are finally glad that there’s somebody on the playground that is willing to punch the bully.”

What happened to turning the other cheek? I ask.

“You know, you only have two cheeks,” Perkins says. “Look, Christianity is not all about being a welcome mat which people can just stomp their feet on.”

How evangelical Christians were supposedly "kicked around" by Obama, I honestly have no idea. Being pro-choice, being pro-LGBTQ rights, not allowing discrimination, is not "kicking around" evangelicals, it is not "bullying" them. It is merely preventing them from being able to bully others. Evangelicals claiming that Obama "bullied" them is like the school bully claiming he's being "bullied" because the school won't let him give anyone a swirly, even though he really likes giving nerds swirlies, or the prom queen suing the school because they forced her to be exposed to people who wear clothes she doesn't like.

The fact is, adultery is just not a big thing for evangelicals, at least so far as it concerns their more powerful leaders. As long as it's not gay adultery like Ted Haggard did, as long as it doesn't include child molesting like Josh Duggar did, you are basically all right and can definitely continue your career of swindling old people out of their Social Security through promises of eternal salvation.

Jim Bakker, for one, was not simply accused of adultery -- he was accused of rape and "admitted" to adultery. In 1987, Jessica Hahn accused Bakker and another evangelical pastor of having drugged and raped her in December of 1980 while she was employed as a church secretary. Hahn had been paid $279,000 in funds from Bakker's "Praise The Lord" ministries and television network to keep quiet about it.

Although Bakker stepped down from his ministry and handed PTL over to Jerry Falwell -- in light of that and the whole going to jail for fraud thing -- he remains a prominent televangelist, selling food buckets in preparation for the apocalypse on television.

In the 1980s and early 1990s, Swaggart was implicated in a variety of prostitution scandals, leading him to step down from two separate ministries and do a whole weird crying thing on television.

Oh, and while Newt Gingrich isn't an evangelical himself (he's Catholic), he's still quite popular with them, despite being a pathological adulterer. In fact, when Tony Perkins was asked to comment on this, he excused Gingrich as well. "Under normal circumstances, Gingrich would have some real problems with the social-conservative community," Perkins told Newsweek during the 2011 Republican primaries, "But these aren’t normal circumstances." Another evangelical minister pointed out that God was super into David even though he did adultery all the time and was also a murderer.

None of this is even all that surprising if you consider the kind of advice televangelist Pat Robertson has doled out to women asking him what they should do about their husband's adultery.

“Here’s the secret,” the famous evangelical said. “Stop talking the cheating. He cheated on you, well, he’s a man.”

The wife needs to focus on the reasons she married her spouse, he continued.

Robertson also offered a little advice on the “tendency of man.”

The evangelical attitude towards adultery among their own kind is, and always has been, primarily "this is just how men are, whatever." They only care about it when doing so benefits their agenda in other ways -- when they can point to it and say "See! Look at what happens when you don't follow our rules!"

For evangelicals -- white evangelicals, anyway -- it is always simply going to be about "us vs. them." If you're "in" you can pretty much do anything you want, from adultery to rape to fraud, and be totally fine and very holy and all of your sins shall be overlooked or forgiven. It is a free pass to do literally anything you want outside of having an abortion or being a gay person. If you're "out" -- if you are not Christian, if you believe in a woman's right to choose, if you believe in evolution or climate change, if you're not a conservative Republican, if you believe LGBT people deserve rights -- everything you do is inherently bad.

Trump has absolute free rein to commit as much adultery as he pleases and never offend the "evangelicals" because he is filling the Supreme Court with anti-abortion monsters, cracking down on gay people being able to call for an ambulance and yelling at store clerks for saying "Happy Holidays." Perkins said as much in his interview with Politico. Literally nothing matters other than these things, and that includes not only adultery, but also saying horrible things about people on a regular basis. That's okay, Perkins explains, because his feelings are hurt when people don't accept him.

This isn't entirely hard to understand. I, personally, do not actually care who a politician consensually screws so long as they are doing good work and advocating for the things I care about. In my case, however, those things often already involve not telling people what to do with their bodies or sex lives. In Perkins's case, he's fine with politicians doing whatever they want morally on a personal basis, so long as they police the bodies and sex lives of other people and allow him to discriminate against them as well. This is what they call being an "imperfect vessel." They care more about their goals then they do about the person helping them achieve them.

Frankly, this is only hypocritical if you think those goals have ever had a thing to do with any kind of actual morality. I don't. Mostly, I think their goals are profoundly immoral. I think they care far less about people breaking the Ten Commandments than they do about getting to force public school children to recite them. Being able to tell people they can't marry the person they love, being able to tell women what to do with their bodies, being able to discriminate, to require that people who don't believe in your religion follow it anyway -- all of that is about power, not "morality."

Tony Perkins does not want morality, he wants power. Trump is giving it to him, and as long as he continues to do so, Perkins will give him all the "do-overs" he wants.

Wonkette cannot guarantee entry into heaven if you donate to us, but we'd sure appreciate a tip anyway!