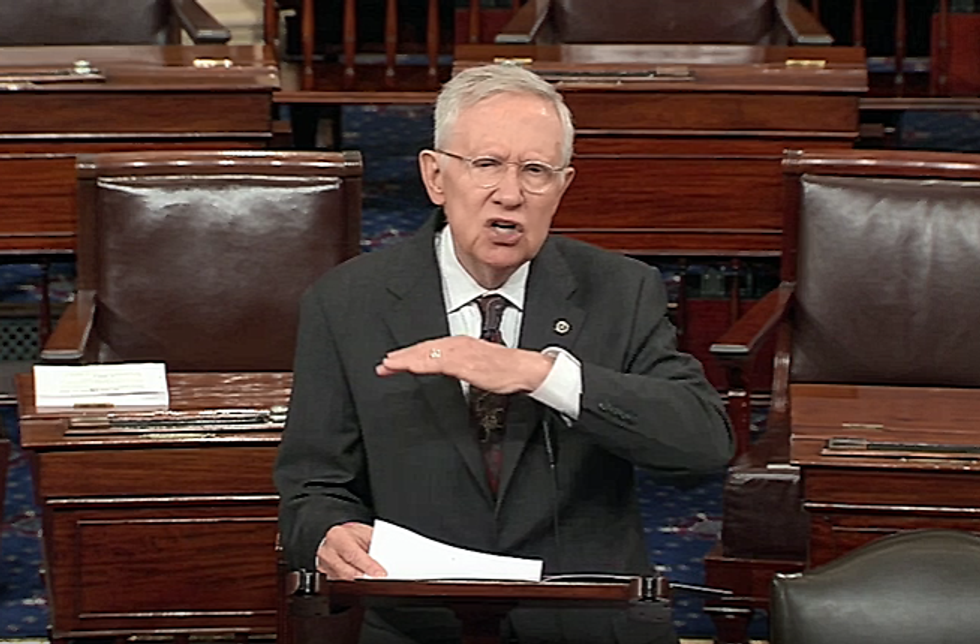 Poor Harry Reid. As he veers toward retirement from the Senate, it just seems like he doesn't have the confidence to say what he really thinks about Donald Trump:

Trump is a human leech who will bleed the country and sit at his golf resort laughing at the money he has made, even though working people have been hurt and ruined.

[wonkbar]<a href="http://wonkette.com/605548/there-goes-badass-harry-reid-trolling-the-living-hell-out-of-donald-trump"></a>[/wonkbar]It's like he's just not sure what to say about Trump, wait holy shit he just called him a "human leech"? YES HE DID. Reid has been doing this so very much lately! He doesn't give a shit, and he has been saying everything that's on his mind about Republicans, and trollin' and hatin' HARD. He's even gone off on Trump before!

The quote you see just above actually came at the end of Reid's statement on the Senate floor, and if we go back to the beginning, we hear Reid submitting into the record Newsweek's fantastic investigative report on Donald Trump's skeezy ties with foreign governments, moguls and criminals. Here are some more words from Mean Harry Reid, saying exactly WTF he thinks about Trump:

Reid then listed off all the million-thousand-eleventy people who have been "fleeced by this so-called billionaire Trump." HAHA, Trump does not like it when people question his obviously immense wealth, which may or may not be Not That Big, like his little bitty weenus hands.

Let's be clear about Donald Trump: He's a spoiled brat raised in plenty, who inherited a fortune and used his money to make more money, and he did a lot of it by swindling working men and women.

Trump just said in Canton, Ohio, that he doesn't feel sorry for working people who have no money, because BOO HOO HE WORKS HARD TOOOOOOO. Naw, for real, man, he said that:

Me, I’m working harder also, so I don’t feel sorry for any of you. It’s true. You think this is easy?

Score another point on the correct-o-meter for Harry Reid!

[wonkbar]<a href="http://wonkette.com/606596/donald-trump-on-flints-black-lady-pastor-btch-set-him-up"></a>[/wonkbar]Reid then whaled all over Trump for going to Flint, Michigan, and instead of doing what he was supposed to do and addressing the crises befalling that city, bitching about Hillary, then saying the black pastor who called him out had "something wrong with her mentally." And then Reid said the "leech" thing and it was amazing.

So anyway, Harry Reid just doesn't know what to say or how to express his feelings very good at all. We hope one day he gets over his shyness so he can be REALLY MEAN to Trump, LOLOL just kidding, Harry Reid is a badass and we are going to miss him forever and ever when he retires. Long live Harry Reid!