Too Many Kids Dying From Drugs, Trump Wants To Kill Them Instead. Wonkagenda For Tues., March 20, 2018 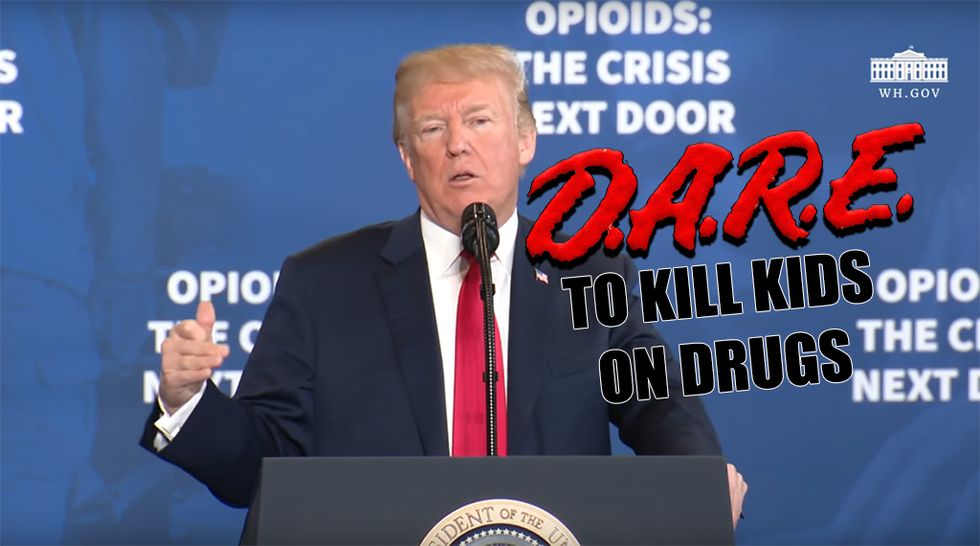 Morning Wonketariat! See us in Philadelphia TONIGHT, as we take over their Drinking Liberally! Here's some of the things we may be talking about today.

As dozens of Congress members rush from their aisles to defend Robert Mueller, Mitch McConnell continues to hide in his shell.

Trump was in New Hampshire to campaign lay out his new opioid policy of killing drug dealers and scaring the shit out of children.

Congress still can't figure out what to do with healthcare and immigration as they try to write the latest trillion dollar omnibus spending bill.

Rep. Bob Goodlatte may finally get to the bottom of HER EMAILS as he gets ready to subpoena the Justice Department.

Erik Prince's lifelong goal of being a "real, no-shit mercenary," is a little closer to reality thanks to Cadet Bone Spurs; isn't it a coincidence FBI Director Christopher Wray led a team of lawyers looking into his sale of paramilitary aircraft to the Azerbaijani military? And concluded he was a big old crookedy crook? OOPS!

A new Monmouth Poll shows that a majority of people believe the "DEEP STATE" is a thing. People are stupid.

The Atlanta Journal-Constitution reports somebody took a shot at Rep. Barry Loudermilk for the second time in a year. The incident happened back in September; the FBI is still investigating why Loudermilk can't catch a break.

The Family Research Council is rethinking its strategy of framing Nancy Pelosi as the overseer of the vagenda of manocide, with Tony Perkins telling reporters, "You can only scare so many people to the polls."

Mitch McConnell is snapping his beak at Senate Republican hopefuls like Missouri's Josh Hawley, who will have to choose between fat stacks of cash and playing in the dirt with Steve Bannon.

National Republicans are terrified that coal CEO and ex-con Don Blankenship might win the West Virginia GOP Senate primary only to collapse in a general election fight against Joe Manchin.

Brushing off criticisms coming from their left, blue dog Democrats are picking up some badly needed legislative victories ahead of the 2018 primaries.

Vulnerable Republicans in purple states are desperate to paint a rosy picture for Dreamers ahead of the midterms, but Trump blew up any chance of a DACA deal by refusing to negotiate.

Today is primary day in Illinois, and Democrats are eager to to pick off vulnerable Republicans up and down the ticket with a slew of candidates and a flood of money.

Meanwhile, Chicago's South Side Democrats are hoping to kick Rep. Dan Lipinski to the curb in favor of progressive candidate Marie Newman, who has gained endorsements from progressive and pro-choice groups.

Four Native American women are running for Congress, and there's even more running for governorships and seats in state legislatures!

SCOTUS has decided not to hear the PA gerrymandering case, allowing the newly redrawn districts to stand! HURRAY!

Some of the apocalyptic, drug-infested opium dens that we call "cities" want to create medically safe injection sites for intravenous users, but the DEA has other ideas.

Trump's White House is getting ready to drop YUGE tariffs on China this week, so it sent out Steve Mnuchin." That should work.

Rather than embrace the spirit of the Persian new year, Nowruz, Trump decided to be a petty bastard and insult the Iranian people. "Ya Kalb"

Just in case you thought about wasting your money, the Trump administration has banned US purchases of Venezuela's government-backed cryptocurrency.

Sen. Thom Tillis and the North Carolina GOP paid $345,000 to Cambridge Analytica two years ago to help beat Democratic incumbent Kay Hagan -- a fact that Cambridge bragged about on its website -- by painting Hagan as complicit in the rise of ISIS.

Facebook chief information security officer Alex Stamos is denying reports that he has been quit-fired for bitching about silly things like "transparency" and "disinformation"; he's simply been sidelined to keep their stock from losing another $10 billion.

In the wake of revelations about Cambridge Analytica, congressional legislators want haul Mark Zuckerberg's ass up to the Hill to answer some questions about data privacy. Do you think he'll wear his hoodie and flip-flops?

And here's your morning Nice Time! JOSIE THE SLOTH! She was saved from the exotic pet trade, and you can help animals just like her!

We're ad-free and reader-supported, and we sure as hell don't steal or sell your personal info. Sheeeit, we barely send you a newsletter.