Topeka Jerk Babies Fear Habitat For Humanity Homes Will Be Full Of Criminals, Which All Poor People Are 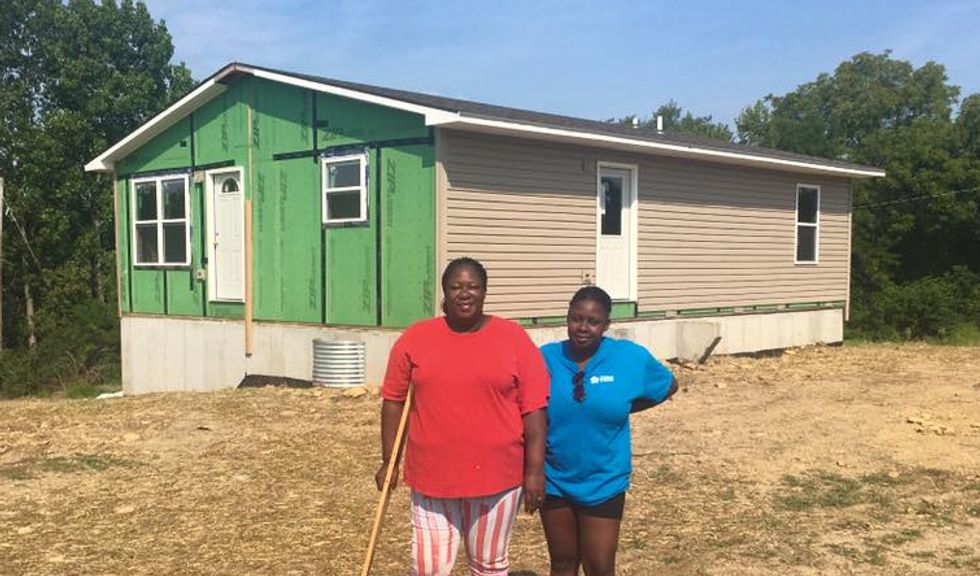 Shavonn Smith is a new homeonwner in Topeka, Kansas -- or will be, once her house, built by Habitat for Humanity, is finished. Her family's very first "welcome" to her new neighborhood, on August 12, was full of exactly the kind of friendliness America is famous for: Some asshole spray-painted great big racial slurs in the grass of the lot where her home was going up, at a site where Habitat was constructing three new houses.

The timing was quite possibly not altogether coincidental, as Janice Watkins, executive director for Topeka Habitat, explained in an email to the City Council and mayor Tuesday: She noted that the racial slurs were found the same day as the deadly white-supremacist rally in Charlottesville. Watkins explained to the Topeka Capitol-Journal that the slurs were only painted on the grass, not on any structures; at the time, there was only a partly built basement foundation on the lot. A neighbor alerted Watkins to the vandalism after he had "essentially weed-whacked it off," which was probably meant as a loving gesture, though maybe he could have waited until the police got a look at it? Watkins also said the owner of the lots decided not to join Habitat in filing a police report because the owner feared retaliation.

Smith said that after Watkins told her about the slurs, she became more angry for four of her children, ranging in age from 9 to 16 years old, who will be moving into the home with her and her husband, likely sometime during the holidays.

“My kids deserve this,” she said. “This house wasn’t given to us. They’re not just bringing random people to the neighborhood.”

There's more to it than just the slurs. Seems as if the folks in the area are leery about these here Habitat for Humanity houses in general. Council member Tony Emerson, who represents the part of Topeka where the vandalism took place, condemned the slurs and defended the neighborhood, saying

This racial thing, that’s not what these people are about [..] The neighborhood was shocked and disgusted. They welcome all people over there. We don’t know who did that.

Oh, but did Emerson have more to say about how folks in the neighborhood felt about the new construction? He did!

Emerson did say, however, that several residents of the neighborhood expressed concerns several weeks ago that there were three foundations constructed next to each other and no identification of what kinds of homes were going to be there or who was building them.

“There were no signs, just basements,” he said. “They were concerned if these were going to be manufactured homes. People get nervous when something comes to their neighborhood and they don’t know what it is.”

“This is a great, close-knit neighborhood,” Emerson continued. “They wanted to make sure the homes will fit into the neighborhood.”

Wouldn't want any strange goings-on at all hours by the wrong sort of people, after all. Watkins also said Habitat had encountered opposition to the three new homes being built:

“Conversations with neighborhood leaders have been filled with undertones of the impoverished bringing a ‘criminal element’ to the neighborhood and overt commentary of Habitat homes and families bringing down the overall quality and value of the neighborhood,” Watkins wrote.

Just simple small-town folk. Good people of the land. The common clay of the Midwest. You know: morons. Watkins had previously sought to address a neighborhood meeting to explain how Habitat homes are good for the community, but they said no thank you.

For the sake of trying to educate the local lumps, the paper -- which helpfully provides the exact block where the new houses are going up -- cited a talk Watkins had given in March about how Habitat works with families, who must complete an 11-month process before they own a Habitat house. In addition to getting financial and credit counseling, the families must put in several hundred hours of "sweat equity" on other Habitat building and renovation projects in the community; only after that minimum is met will Habitat start on the family's new place. A September 1 Topeka Habitat Facebook post marking the installation of the house on its foundation (after it was framed and roofed offsite), noted that the Smith family had already completed 450 hours of "sweat equity," with more to be done before they move in.

Topeka Habitat volunteers will also meet with neighbors at the construction site on September 13 to "meet neighbors, offer resources and provide information about its programs," Watkins explained. And Shavonn Smith plans to go with the group door-to-door through the neighborhood to introduce herself and inform them about how she and the other two new neighbors in Habitat homes have to be rigorously screened.

“We hope they’ll get some education and understand it a lot more,” she said. “We just want to be part of the neighborhood.”

That's remarkably gracious of her, although if one were a misanthropic old liberal mommyblogger, it might sound like the sort of ritual abasement no other new homeowner would need to go through, since apparently the nervous folks of that great, close-knit neighborhood need to be reassured that Smith and other Habitat homeowners aren't a crowd of lowlife gangster thugs. We're sorry to hear Smith feels she has to do that -- she's not the one who deserves a Shame Parade.

Yr Wonkette is supported by reader contributions! Please click the "Donate" clicky, then print out your donation receipt and post in the window of YOUR home. Guaranteed* to increase property values!