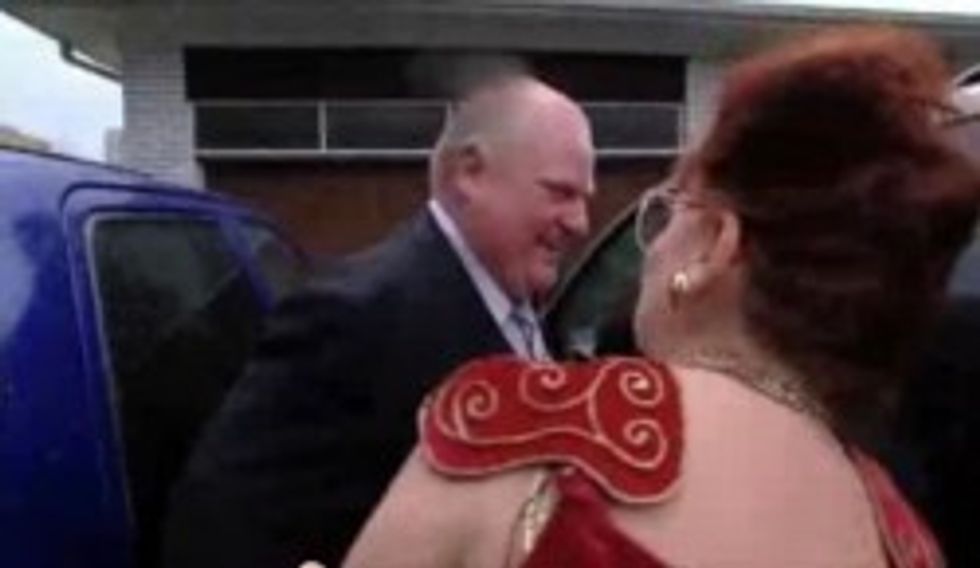 Well, now we've learned who the mayor of Toronto is! One "Rob Ford," a hated geezer conservative tyrant according to the all-knowing "brief Google Search" whoflew into profanity-laced hysterics on the phone with 911 dispatchers after a teevee comedian lady from a Canadian political parody show turned up in his driveway with her cameraperson and tried to interview him as he was getting in his car. Ford ran and hid like a shivering goat and called police -- twice -- allegedly yelling at the operators, “You … bitches! Don’t you f---ing know? I’m Rob f---ing Ford, the mayor of this city!”  Such hockey language! And here we thought Canada was just a kingdom of pleasant goofballs. There goes that Dream.

OH WELL, the important thing is that Toronto is now having a hearty chuckle at their idiot mayor, for being terrified of a middle-aged lady asking him funny questions.

From the Globe And Mail:

“I didn’t know who they were and obviously we’ve had death threats. There was a camera and a mike. It wasn’t any of you guys so I knew,” [Ford] said [to reporters].

The show had crossed a line by showing up at his house, he said.

“My kids and my wife are the closest things to me and I’ll do anything to protect them.”

Ah yes, the well-known "camera and mike" brutal murder weapons those comedians love so much. You can see the video of the exchange here. [Globe And Mail via Crooks and Liars]