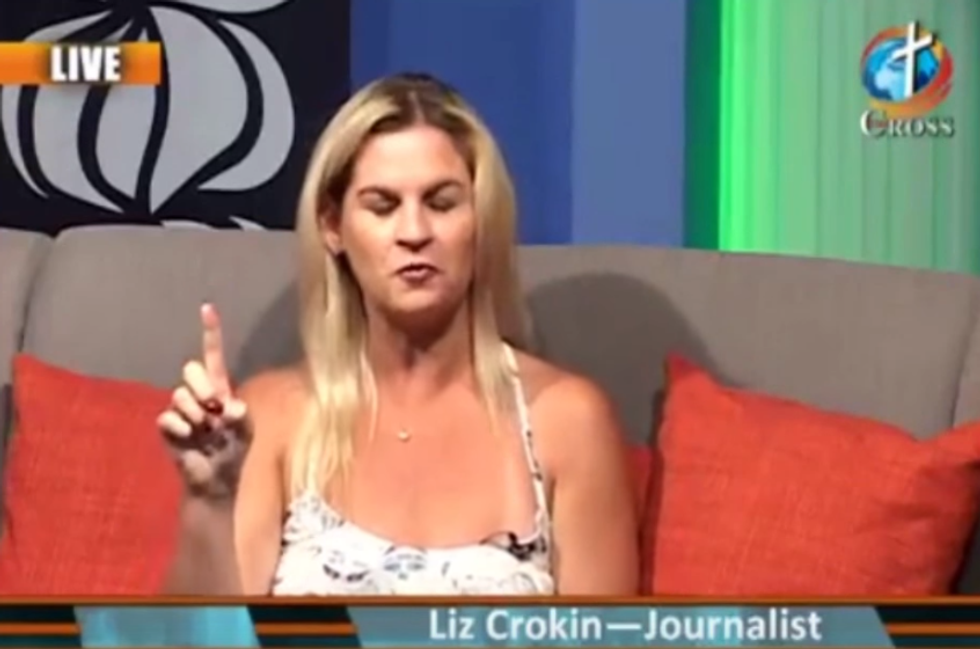 Were we not just learning that the only reason people hate Donald Trump is because they are being Satan-washed in their brains by special radio frequencies? OK, well that is still very FACTCHECK TRUE, but Right Wing Watch flags another one of the reasons you hate Donald Trump. According to a not-at-all crazy lady named Liz Crokin, who exists (ALLEGEDLY), part of the reason people hate Trump, especially #NeverTrump Republicans, is because they are all big #PizzaGaters. MORE SPECIFICALLY, she is just pretty sure you and everybody else hate Trump because Nebraska GOP Senator Ben Sasse used to use himself as a sexxx lure to bait underage boys to Omaha, so that Denny Hastert could travel from Illinois to Omaha, for the purposes of doing underage sex to them. Or something like that. We are not entirely clear?

Here, let Crokin 'splain you on some kind of Jesus program, where she is identified simply as a "journalist":

Crokin encouraged viewers to “look very closely at the people who are screaming the loudest, complaining about President Trump” because “every single one of those people, you’ll find—because I’ve researched all these scumbags—you will find that all of these people have ties to sex trafficking rings, ties to pedophilia, ties to pedophiles.”

Every. Single. One. She has DONE THE RESEARCH!

“For example, Sen. Ben Sasse from Nebraska” she said. “We know that there was a huge cover-up with the trafficking of young boys to politicians from Omaha, Nebraska. He’s one of the Republicans that has been screaming the loudest against President Trump. Well, he used to work for Speaker of the House Dennis Hastert, okay? And there are people who claim that his job working for Dennis Hastert was to help lure young, underage boys for Dennis Hastert, who went to jail for raping boys.”

And granted, Omaha is in Nebraska, which is only two states away from Illinois, where Denny Hastert is from. So ... one tank of gas each way?

And granted, Ben Sasse did work for the Congressional page program in the late 1990s when Hastert was speaker.

And granted, there was a crazy thing in Omaha between 1988 and 1992, where there were unproven claims of a massive underage child sex trafficking operation known as the Franklin child prostitution ring. It was bugfuck crazy, almost certainly not true, and seemed to be part of the 1980s Satanic Panic that gripped the nation, 99.999999% of which was unmitigated bullshit. But if you ever saw an episode of Sally Jessy Raphael or Geraldo, you know what we're talking about.

But despite all those #TrueFacts, we are still worried that MAYBE Ms. Crokin is smoking crack. She didn't make up the conspiracy theory, of course. Esteemed serious journalists like Mike Cernovich have been making it up since spring of 2016, because they just couldn't figure out why all these Republicans with brain cells hated Donald Trump during the primaries. It didn't take them long to figure out that OBVIOUSLY it's because of all the pedophilia, OBVIOUSLY. Hey, if Hillary was doing #PizzaGate in coastal elitist Washington (and she wasn't), doesn't it stand to reason that Trump's Republican opponents were probably also doing #PizzaGate in heartland Nebraska?

Don't worry, this makes sense inside the pool of syphilitic bat smegma that (allegedly!) lives inside the cranial cavities of Mike Cernovich and what's her face up there in that video.

We don't see, though, how Crokin is using her squirrel brain to merge Hastert's page program in the late 1990s with the Omaha conspiracy theory in the late 1980s. Did Denny Hastert come to Omaha so a 16-year-old Ben Sasse could find him hot boys? And why would Ben Sasse have that kind of job as a 16-year-old? Like, OK, fine, "GET A JOB, YOUNGSTER, LEARN SOME RESPONSIBILITY," but wouldn't it be more likely for a young Nebraska teenager like Benjamin to get a job at the Dairy Queen, instead of being the Omaha liaison for Denny Hastert's international boy fucking cartel? Did his guidance counselor tell him about the job?

We simply don't know, but we are definitely convinced. Please admit that this is why you hate Trump in the comments of this, your OPEN THREAD.