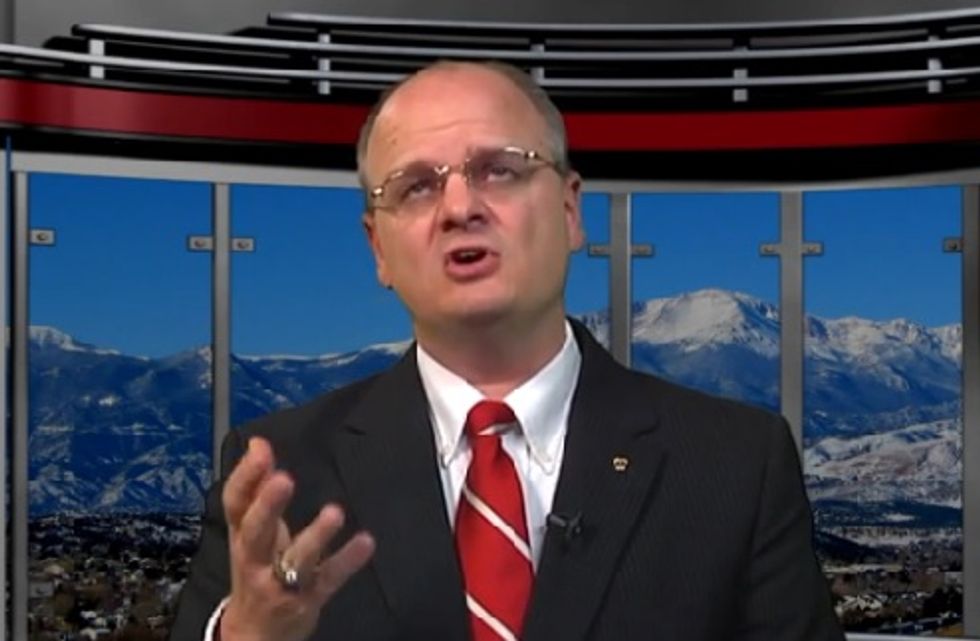 Oh boy, Doctor Chaps is back! We've so missed his weekly declarations of demonic possession now that he got a big boy job in the Colorado legislature.

You might remember the self-proclaimed Doctor Chaps (his words!) as the teevee preacher man who believes that Barack Obama is literally possessed by demons. Like literally literally. As in demonic possession was literally this guy's dissertation.

Now that Gordon has a job in the halls of government, he has a chance to really mix things up in Denver, and by that we mean crash it into the lake, in Jesus's name.

His latest antic is an attempt to make the Colorado government more small-d democratic by making Colorado administrative law -- basically the rules and regulations that govern state agencies -- subject to review by the state legislature. As it stands, executive agencies have a lot of authority when it comes to setting their own policies, because pouring over the minutia of internal administrative law might not be the most efficient way for state legislators to spend their precious sitting around and snorting lines time.

Gordon's law is grounded in something other than wingnut demon-hunting lore, for which we're actually kind of impressed. There are actual smart people who said smart things and Gordon actually listened to them, which is, um, refreshing? It doesn't say much about a lawmaker that we're praising him because he didn't cite the Malleus Maleficarum but we'll take what we can get.

Klingenschmitt was inspired to spend a month drafting the bill after he read "Is Administrative Law Unlawful?" The book, by Columbia University law professor Philip Hamburger, questions whether things such as the Code of Colorado Regulations are constitutional.

Hamburger believes that administrative law, at least at the federal level, is unconstitutional because it imposes laws that weren't created by Congress. For instance, the Environmental Protection Agency, which oversees enforcement for oil spill cleanup and air quality standards, rules through administrative law.

Hamburger Helper does have at least something of a point. There is a lot of regulatory law that is left up to the regulatory agencies to set, on the thinking that maybe pig ball cutters are not the most qualified people to be setting regulatory policy, but rather, it should be the people who, I don't know, actually have to enforce this stuff. Now while the legality of such regulations is a little questionable, it's a pretty long way from the jack-booted FEMA camps that wingnuts seem to think is the EPA's bread and butter.

Gordon's solution for these independently regulating agencies is to put all of their administrative laws up for review by the state legislature. And while that sounds tedious and in most cases a waste of time, the really odious part of the bill is the timeline for this review: every four years. That doesn't just mean that reviews are conducted every four years, but that such reviews must happen or the entire administrative law is automatically scrapped. A shiny nickel to the first one who can see the problem with this.

But HB1044 could cripple some state agencies by eliminating regulations and potentially leaving them temporarily lawless while legislators review the rules, [University of California law professor Jon Michaels] said. Since legislators cannot have the expertise that agencies have when it comes to what they oversee, administrative law exists for a good purpose, he said.

Ding ding ding! You win the prize! Go spend it on something nice, kid.

Gordon's bill rests on the very real likelihood that such reviews are entirely up to the legislative bodies to conduct, and if, just as a hypothetical, one entire party of the American political system had it out for whole swaths of the executive branch, there isn't much stopping them from just delaying and delaying and delaying these reviews until, whoopsie, no more environmental protections! Oh no, what a shame! Do come again, Colorado Department of Public Health and Environment.

How bad is Gordon's proposal for Colorado? Well, it says an awful lot about your bill when the very guy whose writings inspired it is against it. Yeah, even Hamburger Helper is against this crap.

University of Colorado law professor Richard Collins also points out that such a plan is going to cost massive amounts of precious Ameros in bureaucratic rigmarole, because that's what the definition of big government is, Gordon, ya big goober. Fortunately Gordon offers this reassurance:

Klingenschmitt is not sure what the bill's fiscal note will be, but he hopes it will "not be a burden on the executive branch," and should reduce their costs.

He thought this proposal through so well that he doesn't even know the cost. Thankfully, he packed it full of "hopes," which should be enough to appease tax payers when they have to foot the bill. It worked for all his exorcisms.

[The Gazette / Wipf and Stock Publishers]