Track Palin Has Most Charges Dropped From Punching Girlfriend In The Face, Isn't That Nice? 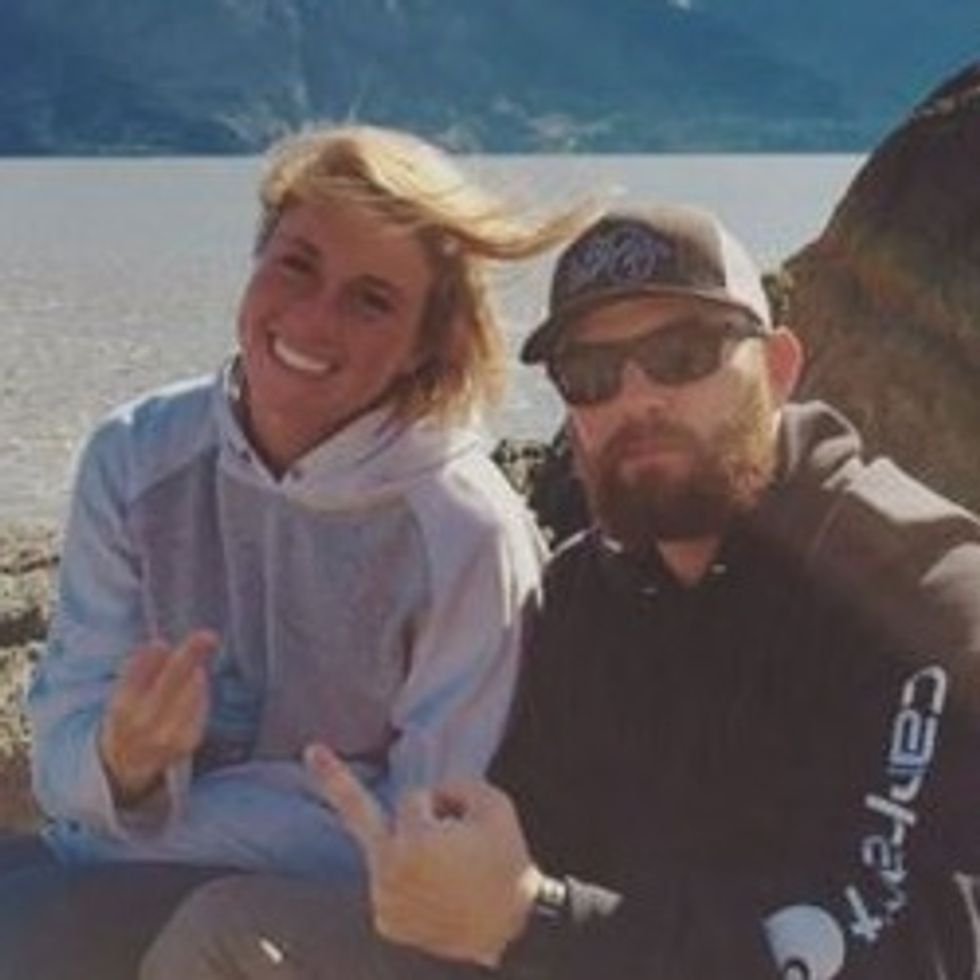 Track Palin and Jordan Loewe; stolen from Immoral Minority. Track Palin has struck a plea deal with the Anchorage Veterans Court stemming from a January incident when hepunched his girlfriend in the face, held a weapon to his head and threatened to fire, kicked her in the knee, and tried to keep her from calling 911, allegedly.

You and everyone else will be delighted to know the state dropped domestic violence charges and charges of interfering with the report of a domestic violence crime, and Track pleaded guilty only to having a weapon while shitfaced. This was done "as a condition of his entry" into the veterans court, though the Alaska Dispatch News does not say whose condition that was. Like, did Track Palin say "naw, I will not go to your special veterans court unless you drop all these charges"? Or did the court say, "we are not allowed to sentence you to a hug if you beated up your girlfriend, so see if you can get those dismissed first"? A curious Wonker Nation wants to know!

Here is a paragraph from the police report!

Sergeant Rader observed [redacted] to have bruising and swelling around her left eye. She complained of pain to that area as well as to her right knee. He observed a small red area near her knee. The involved firearm, an unloaded AR-15 rifle was located on the kitchen counter.

While we certainly hope Track Palin gets the help he needs in the alcohol sobriety plan the court has set up for him, and that Barack Obama will stop personally giving veterans the "PTSD" they had before they went into Army, it is still a small bit concerning to us that Palin's domestic violence charges were dropped so easily. And if he does all his AA meetings, or whatever they do for alcohol treatment in the Anchorage Veterans Court, his "weapons misconduct" charge will be expunged too! That is very nice for him.

Here is a much longer paragraph from the police report!

She and her boyfriend of one year, Track Palin, left a different residence together and were arguing the whole way home. Once they got to his home they argued in the car, then in the driveway . They were screaming and he was calling her names. [Redacted] told Palin that she had called the cops even though she had not, in attempt to calm him down and to scare him away from “touching her”. Palin approached [Redacted] and struck her on the left side of her head near her eye with a closed fist. [Redacted] got on the ground in a fetal position because she didn’t know what else he would do. Palin then kicked [redacted] on the right knee. [Redacted]’s phone was sitting on the ground in front of her. Palin took her phone and threw it across the driveway. She retrieved the phone and went inside the house. Palin was already inside and holding onto a gun, yelling “do you think I’m a pussy?” and “do you think I won’t do it?” [Redacted] stated Palin “cocked the gun” and was holding the rifle out next to him with the his right hand near the trigger and his left hand near the barrel, with the barrel just away from his face pointed to the side. [Redacted] was concerned that he would shoot himself and ran outside and around the house. She didn’t see where Palin went, so she went inside and up the stairs, where she hid under a bed. Shortly after, she heard Palin walking around inside looking for her. Palin left after not locating her.

That seems quite terrible and scary!

Here would be a good place to let you know that as far back as April, there have been rumors that Track Palin's victim, Jordan Loewe, got back together with him shortly after "the incident," and is pregnant. While we were loath to go on the rumors, because we desperately hoped for her sake that they weren't true, here is her purported baby registry. (You would never do anything bad to someone's baby registry, Wonkers, in case I have to remind you.)

So, happy Monday, everything is awful! But not as awful as the divine wrath will be should you be unkind in the comments regarding domestic violence, Ms. Loewe, or any kind of violent ideation on what "should" have happened to Track Palin instead. You have been well-warned!

Now let's get back to our regularly scheduled programming of impeaching President Obama for doing domestic violence to that young lady.