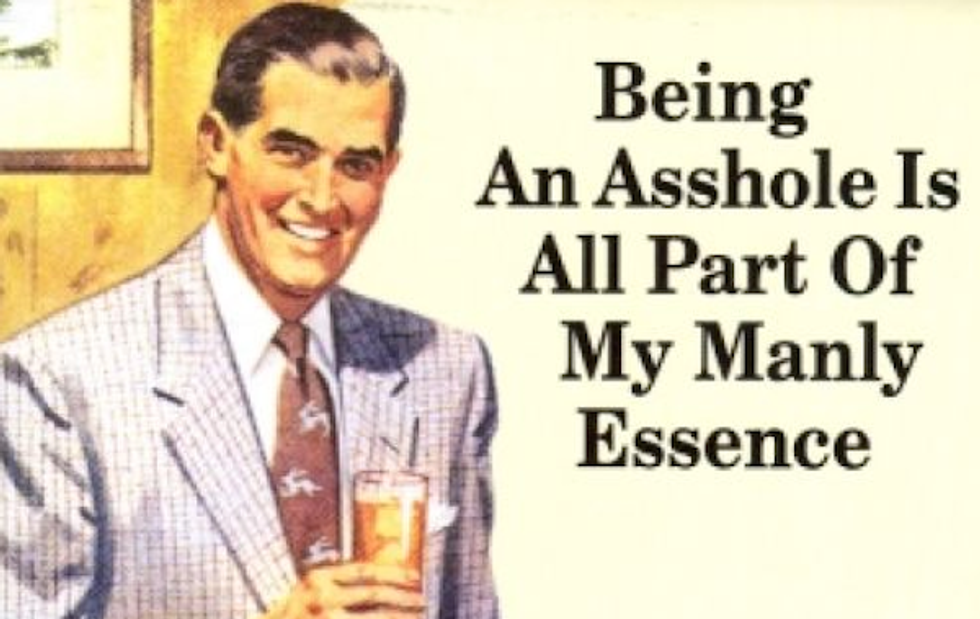 Rebecca suggested to me that perhaps I ought to do a THING on Saturdays just about what is goin' on in the mansophere and the alt-right and all the other gross parts of the internet. I have not come up with a name for this yet! Perhaps you will help me out? HMM? Sad Man Saturdays? The Internet of Jerks?

We will think of something later! For now, let's take a look at this darling op-ed in National Review about how we all need to work together to bring traditional masculinity back, because traditional masculinity is better than the masculinity we have now, just like how old-timey safety razors are less likely to give very masculine writer C.R. Wiley razor burn than newfangled disposable razors are. IT TAKES A VILLAGE, OK?

Most of the essay, as I mentioned, is about razors and blacksmithing, which I guess are just an easier sell than "Hey ladies, quit your jobs and go be housewives and then I will feel way more manly!" But also he is very nervous about traditional men like himself going extinct.

In a roundabout way this gets me to something that I’ve been thinking about for a while: Are men-as-men obsolete?

Some people think so. Hanna Rosin published a book with the help of her husband a few years back entitled The End of Men: And the Rise of Women. I’ve not read it, but I am familiar with how the story ends. It ends with traditional guys like me winking out of existence. According to the story, if we ever served a purpose, which is doubtful, we’ve been replaced by things like robots and the internet. Then there’s the welfare state, which magically meets the needs of women and children better than men ever did.

WILL NO ONE SAVE THE TRADITIONAL GUY? Sure, you see all these environmentalists going around trying to save the greater sage grouse and what have you, but no one cares that traditional guys are an endangered species as well! Guys who like tradition! And safety razors! Replaced with food-stamp dispensing robots who don't even need to shave.

But for real -- is there any quality more manly than declaring your opinion on a thing you have not read to be the end-all-be-all of opinions on that thing?

Wiles is super vague about what he's trying to say here, but I'm pretty sure the gist of it is that he would very much prefer women not work.

We used to depend on men with agency like Alec Steele. Today we depend upon the machinery of the welfare state and forms of employment more fit for insects than for people.

So basically what he is saying here is that women are taking up all the good jobs that men could be having, and forcing them to work jobs for insects? Or something? It is hard to tell.

I think men-as-men and women-as-women are poised for a comeback, too. Choosing the freedom of convenience has made us dependent on large and impersonal things. But the old arts made us dependable, and good for something. They freed us to make a difference, not in something as incomprehensible as the global economy, but in the lives of real people.

I'm not even sure how being into "old arts" has anything to do with needing to return to outdated gender constructs -- particularly considering the popularity of knitting and crocheting among feminists.

Traditionally, men-as-men made things. And of all the things they made, households in the old-fashioned sense were the most important. What I mean by old-fashioned is this: An old-fashioned household was a going concern, rather than the recreation center we see today. It demanded things of the people, because it was productive, like blacksmithing. In return, it also enriched both the men who raised houses and the women and children who were sheltered by them. I have written a little book to help bring such households back.

Wiles recognizes the fact that he can't have the traditional household he wants if he can't find a woman to go along with him on that, and thus implores us all to give up all those "choices" we like so much.

To women who believe men-as-men are obsolete, I suggest you reconsider. Choosing the easy way has made you dependent and vulnerable in ways you do not seem to be aware of. I’m not going to try and tell you that you can have it all. But I do suggest you depend on something else for a change. The men I’m talking about need you, because building an old-fashioned house isn’t something they can do alone.

It sure isn't! Not without going full Handmaid's Tale, anyway.

We all want things we can't have. I wanted to be a vaudeville star as a child, but the fact that the Orpheum Circuit was no longer around made that goal rather impossible to obtain. Not to mention how difficult it would have been to get an audition with Flo Ziegfeld, what with him having been dead since 1932 and all. I was simply born too late for that -- which, in literally every other respect, was a blessing. Women are not going to go back to "Mad Men" times just because it would make the worst dudes on the planet stop pouting. So C.W. Wiley and others of his ilk are just going to need figure out how to deal with it.

Wonkette is supported by our readers! Click the link below to send us your hand-forged gold Ameros!