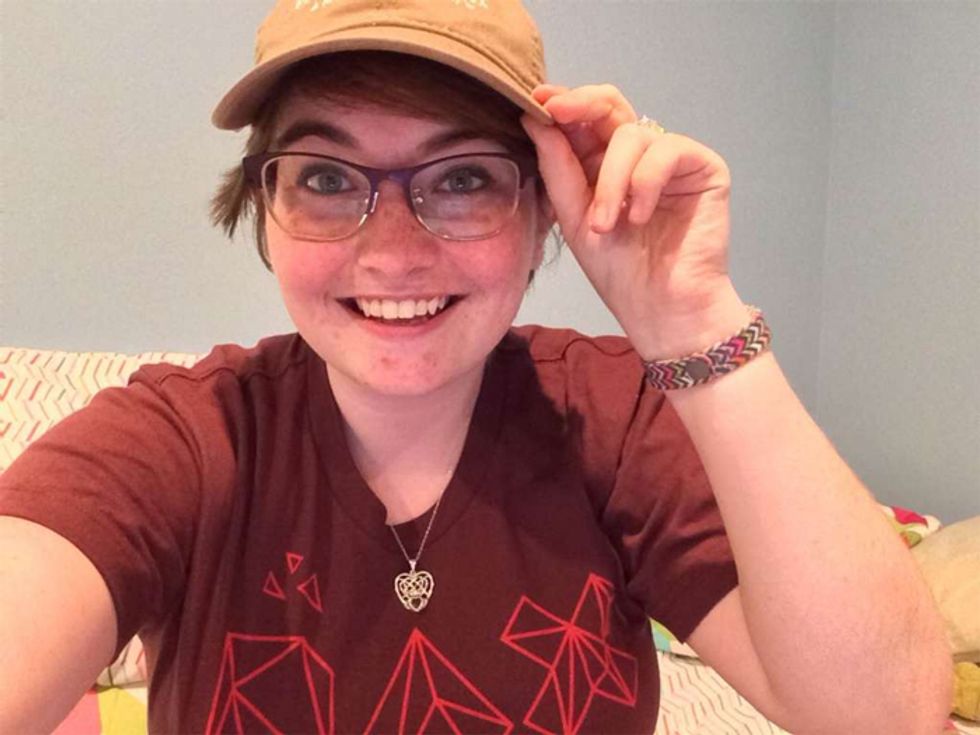 In what's sure to be part of a growing trend, a young woman in a Walmart restroom Friday was treated to a stern anti-transgender scolding from a self-appointed member of the Moral Police in Danbury, Connecticut. Aimée Toms, a 22-year-old college student from Naugatuck, was washing her hands when a complete stranger hissed "You’re disgusting!” and “You don’t belong here!” Toms, you see, has really short hair and was wearing a baseball cap, which was enough to convince the sharp-eyed Walmart shopper that Toms had to be one of those filthy transgender people using the ladies' biffy, endangering The Children and ruining America. Toms posted a fine video rant about the experience to Facebook Friday evening, and the video quickly went viral, with nearly 40,000 views since it went up. We have to say we like the cut of her jib. Toms introduces the video with this brief caption:

If it really takes me pulling up my shirt and showing someone I grew these boobs myself for them to leave me alone in a restroom, I don't want to live on this planet anymore.

This really lit a fire under my ass today.

Toms said she believes the noise surrounding North Carolina's terlet law and the Great Big Target Boycott have emboldened bigots to take on the important job of policing restrooms for themselves:

And why is Toms going around looking like a dude, with short hair and a baseball cap? Toms currently has such short hair because she chopped off her nice long locks in January for a charity that makes wigs for kids with cancer:

Toms says she has several transgender friends, including a high school friend who was a prom queen but later identified as male. Toms also says she never thought the video would be seen beyond her friends and family, and was surprised she started getting supportive comments from all over. In the video, she points out there haven't been any actual cases of transgender people attacking anyone in restrooms, the supposed impetus for the North Carolina law, and adds that women are far more likely to be assaulted by cisgender men, saying she was followed into a restroom by a man last year and almost sexually assaulted.

A number of members of the Internet Comments Detective Bureau have seized on the fact that Toms didn't report the incident to police or Walmart as proof that nothing actually happened, insisting Toms is simply a deranged liberal social justice warrior trying to become famous and push an agenda. Toms told the Danbury News-Times she hadn't said anything to Walmart management because she didn't see where the woman went afterwards, and even if they did find her the most they'd be able to do would be to tell her to mind her manners, since saying mean things to someone in a restroom isn't against the law. One comment section investigator on the News-Times website summed up their prosecutorial evidence thusly:

This. Did. Not. Happen

Seriously, people! So quick to believe?

She knows there are no cameras in the restroom. She does not report it to the Walmart management, does not call police...there are no witnesses. It does not have a ring of truth to it.

Shame on her. There are real incidents of harrassment based on hate and ignorance - no need to stir up anger over a made up story.

Then she adds the tidbit about a man following her into a restroom to rape her last year...did she report that one? Show me the evidence.

More likely the rape story fits into her agenda, as if to say that if a man is intent on rape, he can go into a restroom even if the laws being considered today are not in place.

This kind of behavior makes ME want to get off the planet.

Others pointed out that, yes, there have been other cases of cisgender women being harangued for looking insufficiently feminine while using public restrooms, like the incident earlier this month in Frisco, Texas, where a very concerned man followed a woman into a restroom to tell her he thought she looked too mannish. That incident was recorded by the woman on her cell phone. Ah, say the skeptics, so why didn't Toms pull out a phone and record her supposed harassment, then? And then some genius says it's all Caitlyn Jenner's fault for making people uncomfortable with trans people in the first place, and if those people would simply stay hidden, none of this would be an issue. Our favorite "disproof" of the incident was this one: "It didn't happen. Liberals make up stories like Sandy Hook and this to push their sick agenda." QED.

Can We All Stop Making Up Fake Cake Fag Stories? That'd Be Great

Yr Wonkette concedes there is some possibility Toms's story could be a hoax like the "fag cake" non-incident at Whole Foods in April.* In this case, we're fairly comfortable believing Ms. Toms, simply because we'd like to think someone who donates hair for kids with cancer isn't a big old liar. Also, in her video, Toms says she looks "adorable" in a baseball cap and short hair, so there's one verifiable statement already. And in the very same comments sections where Internet Sherlocks are accusing Toms, others are also calling trans people sick disgusting perverts -- sounds like they might be quite happy to say that to a stranger in a restroom, too.

* That story wrapped up recently with the accuser admitting it was a hoax, dropping his lawsuit against Whole Foods, and apologizing; Whole Foods has dropped its countersuit.