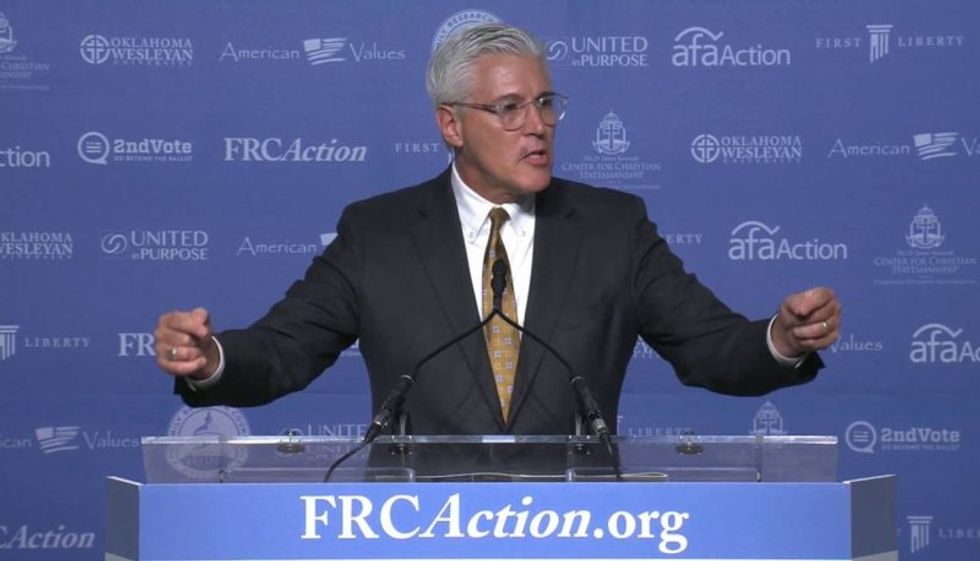 Dr. Everett Piper, president of Oklahoma Wesleyan University -- the very exclusive alma mater of "Heaven Is For Real" author Todd Burpo, is ready to start class! He is teaching How To Be A Feminist 101. This class is much different from any other class on feminism you might encounter at one of your secular schools.

While filling in for Family Research Council president Tony Perkins on his Washington Watch radio program, Dr. Piper explained that HE was the real feminist, and the real liberal, because he has some weird issue with trans people existing.

"Why are we being silent in the face of a culture that is degrading and insulting a female by saying that she’s not a biological fact, but she’s nothing but a fantasy and a fabrication of a dysphoric male who wants to raise his hand on a given day and say he’s a woman?

Why is it too political for us to defend the dignity and the identity of a woman? You can’t be a feminist if you deny the feminine. We are the true feminists today. We are the true liberals today.”

This is very true and also why I do all my feminist blogging in a hoop skirt.

Kidding! Clearly I am a terrible feminist! I don't even own a hoop skirt, and I certainly do not think that other women are an insult to my womanhood.

Oddly enough, Dr. Piper once went viral with a screed titled "This is Not a Day Care. It’s a University!" in which he decried the horror of university students speaking out against things they oppose:

Our culture has actually taught our kids to be this self-absorbed and narcissistic. Any time their feelings are hurt, they are the victims. Anyone who dares challenge them and, thus, makes them “feel bad” about themselves, is a “hater,” a “bigot,” an “oppressor,” and a “victimizer.”

HUH. So let me get this straight. Trans women (I guess he doesn't know about trans men?) should not exist because -- according to Dr. Everett Piper -- their mere existence is an insult to "womanhood" and he is offended by that (as a feminist!), and it's OK for him to say that, but not OK for other people to say what they are offended by. When Dr. Everett Piper complains about the existence of trans women, he is not a snowflake, he is bravely taking a stand for something he believes in. When other people do it, they are snowflakes.

This is quite the double standard.

Alas, I don't think I'll be taking any guidance in my feminism from Dr. Everett Piper! And probably trans women are not going to go back into the closet simply to protect his ideas about what a woman is. Perhaps he should take his own advice?

If you’re more interested in playing the “hater” card than you are in confessing your own hate; if you want to arrogantly lecture, rather than humbly learn; if you don’t want to feel guilt in your soul when you are guilty of sin; if you want to be enabled rather than confronted, there are many universities across the land (in Missouri and elsewhere) that will give you exactly what you want, but Oklahoma Wesleyan isn’t one of them.

Because it seems like he is the one who needs to do some humble learnin'.

Wonkette is a woman and she's calling your name. Pony up please!