Trey Gowdy Eats Own Dick In Front Of Former CIA Director, How Embarrassing 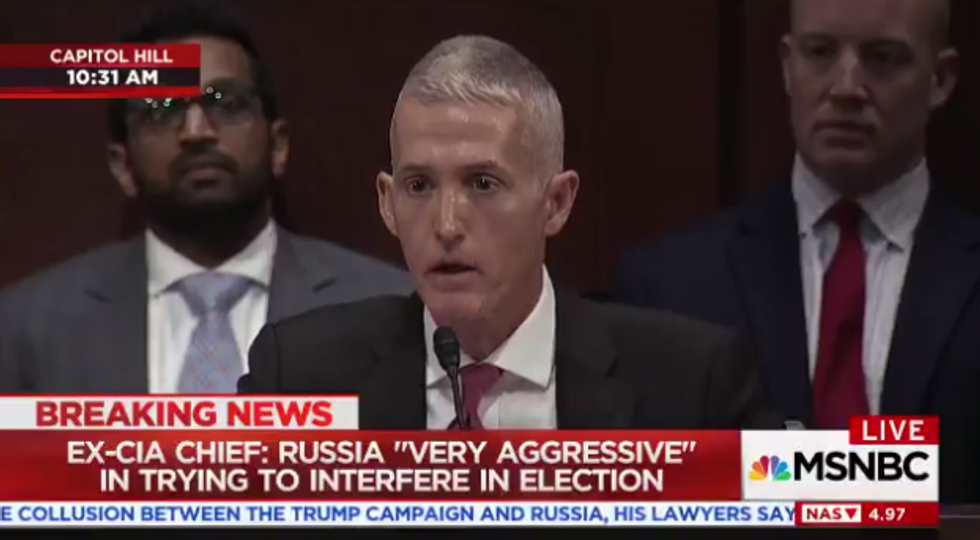 Every time Gowdy asked a question, he immediately danced a hillbilly victory jig while love-spanking his own ass like "T.K.O. MOTHERFUCKERS!" In response, Brennan gave him funny looks and flung the white-haired hick out the window, WITH WORDS.

Let's start with this video, where we find Gowdy very Confused about all the C-words he hears about the Trump team's Coitus-ing with Russia, like Collusion and Collaboration and Coordination and Contact. He thus asked Brennan to Clarify:

Brennan: I encountered info & intel that revealed "contacts and interactions" between Russian officials and the Trump campaign. (via @MSNBC) pic.twitter.com/fwaHl2GgxM

GOWDY: Did evidence exist of Collusion, Coordination, Conspiracy between the Trump campaign and Russian state actors at the time you learned of 2016 [Russian] efforts [to meddle with the election]?

BRENNAN: I encountered and was aware of information and intelligence that revealed contacts and interactions between Russian officials and U.S. persons involved in the Trump campaign, that I was concerned about because of known Russian efforts to suborn such individuals, and it raised questions in my mind ... whether or not the Russians were able to gain the cooperation of those individuals. I don't know whether or not such collusion -- and that's your term -- such collusion existed. I don't know. But I know that there was a sufficient basis of information and intelligence that required further investigation by the Bureau to determine whether or not U.S. persons were actively conspiring, colluding with Russian officials.

Gowdy asked Brennan where that SO-CALLED INTELLIGENCE came from, and Brennan told him it was Classified, so how you like them Candy Apples, Gowdy? Wanna step on your Cock some more by coming at John Brennan?

Of course he did! Trey Gowdy is a very simple man who doesn't understand much about the world besides how he thinks Hillary Clinton is a C-Word who makes his dick shrivel up.

Gowdy with the same fucking question:

GOWDY: Did you see evidence of collusion?

BRENNAN: 'I saw information intel that was worthy of investigation by the bureau.' (via @MSNBC) pic.twitter.com/4K5WT5R3Kc

GOWDY: Did you see evidence of collusion, coordination, conspiracy between Donald Trump and Russian state actors?

Brennan with the same fucking answer:

BRENNAN: I saw information and intelligence that was worthy of investigation by the Bureau to determine whether or not such cooperation or collusion was taking place.

GOWDY: That doesn't help us a lot!

Trey Gowdy, you chicken-headed dipshit, you are beyond help.

There was another thing Gowdy obviously wanted to get Brennan to say, namely that he hadn't seen "evidence" of collusion between Trump and Russia. Brennan's answer? "I don't do evidence. I do intelligence." YA BURNT. Perhaps Gowdy should go back to school and learn how United States government works before he ever again decides to spread his thin lips wide and leak word sounds.

But how, then, could John Brennan be so sure he had important intelligence about possible collusion between Trumpers and Russia, that he just had to share with the FBI, if he didn't have EVIDENCE of WORDS THAT START WITH "C"? Here, have some expert knowledge, from an actual expert:

This is a notable comment from Brennan: “frequently, individuals who go along that treasonous path” don't even realize it till it's too late pic.twitter.com/VqkaO7WJeP

I have studied Russian intelligence activities over the years, and have seen it ... manifest in many different of our counter-intelligence cases, and how they have been able to get people, including inside of CIA, to become treasonous. And frequently individuals who go along that treasonous path do not even realize they're along that path until it gets to be a bit too late. And that's why ... my radar goes up early when I see certain things that -- I know what the Russians are trying to do, and I don't know whether or not the targets of their efforts are as mindful of the Russians' intentions as they need to be.

Brennan made other news during the hearing, like for instance that he warned his Russian counterpart in the FSB back in August 2016 that the Russians goddamn better stop fucking with our election, a warning Russia obviously did not heed. He also said that "if the reports are true" about Trump spooging code-word-level Israeli intelligence all over the Russian ambassador last week, he definitely violated American intelligence protocols. The Washington Posthas a nice round-up here, if you'd like to read it.

While this post is mostly about making fun of Trey Gowdy for being at least three raw squirrel dicks shy of a traditional Gowdy Family Squirrel Dick Sushi Dinner Party And Cousin Swap, there was an extremely powerful moment you should share far and wide, when Democratic Rep. Denny Heck of Washington asked Brennan why we should all care about whether Russia tried to steal the election for Trump. Here is Brennan's answer:

Q: Why should we care?

BRENNAN: Our ability to choose our elected leaders as we see fit is an inalienable right we must protect. pic.twitter.com/Ry7o8CKXlx

Because for the last 241 years, this nation and its citizens have cherished the freedom and liberty that this country was founded upon. Many, many Americans, brave Americans, over the years, have lost their lives to be able to protect that freedom and liberty. They've lost their lives also to protect the freedom and liberties of other countries and other peoples around the world. Our ability to choose our elected leaders as we see fit is, I believe, an inalienable right that we must protect with all of our resources and all of our authority and power. And the fact that the Russians tried to influence that election so that the will of the American people was not going to be realized by that election, I find outrageous and something that we need to, with every last ounce of devotion to this country, resist, and to try to act to prevent further instances of that. And so therefore I believe that this is something that is critically important to every American. It's very important to me, for my children and grandchildren, to make sure that never again will a foreign country try to influence and interfere in the foundation stone of this country, which is electing our democratic leaders.

In response, Gowdy went on to ask questions about "illegal unmasking" and "OMG ALL THESE LEAKS," and he also tried to insinuate that the CIA and FBI investigations into Trump-Russia matters are only based on the Steele Dossier (much of which has been confirmed), because apparently Trey Gowdy is smarter than the CIA and the FBI (LOLOLOL).

But that shit ain't worth your time because fuck Trey Gowdy in the ass with the Statue of Liberty's bare foot.